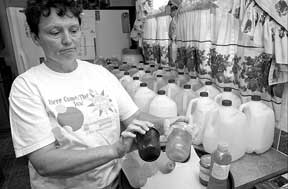 Maria Lambert of Prenter Hollow in Sand Lick, W.Va., shows a sample of her tap water—contaminated by nearby mining—and the countless jugs of water she must now carry to her home every day for cooking, drinking, etc. Photo by Paul Corbit Brown

Maria Lambert was born in the coal camps at the head of Prenter Hollow. When she moved down the road to Sand Lick in 2000, her father drilled a well. He tested the water and found it safe to drink.

In 2003, Massey Energy began blasting the ridge over Prenter Hollow. The first time her house shook, Lambert says, boards fell from the ceiling. The next day, she noticed orange slime and blackened water coming through her home’s waterline.

Many months later, Lambert’s mother gathered a meeting of neighbors who had polluted wells. Lambert discovered that in Sand Lick and neighboring communities – Hopkins Fork, Prenter, Laurel Creek – an abnormally high proportion of citizens had gallbladder and kidney disease, intestinal disorders, and cancer. These ailments affected residents of all ages.

Lambert suspected that a possible cause of the poor water quality and health was a slurry injection, located three miles from her house, adjacent to the blasting site. Slurry – the wastewater produced when coal is washed with chemicals to prepare it for use – had been pumped back into an abandoned underground mine. In addition to chemicals, slurry contains high amounts of the heavy metals found in coal, including arsenic, mercury, and selenium.

With Coal River Mountain Watch, the Ohio Valley Environmental Coalition and her neighbors, Lambert created the Prenter Water Fund (prenterwaterfund.org), which supplies clean water to polluted communities in the area. By next April, the communities expect to have city water. Until then, Lambert says, “I’m waiting on our governor to say, ‘I’m sorry, I’m not going to let this happen to anyone else.’”

Elmer Lloyd calls himself a lost-and-found man. He’s 52, back bent from 15 years in the mines. If his property hadn’t flooded three years ago when Nally & Hamilton began blasting the mountain above his home, he wouldn’t have thought twice about strip mining. Now Lloyd’s seen what’s happened to his water as a result of it, and he’s spoken out.

In 1993, Lloyd built a pond behind his home and stocked it with fish. Thirteen years later, his fish died due to sediment run-off from the strip mine above his home. When the Kentucky Fish and Wildlife Service tested the pond, they told Lloyd that it was dead and he should have it removed. The pond drained into Cumberland’s primary water source.

“That was heartbreaking for me,” Lloyd says. He had built the pond for his grandchildren to camp and fish like he had done in the mountains, decades before when the peaks were still intact.

Regional inspectors fined Nally & Hamilton and gave the company 30 days to remove Lloyd’s pond. But Lloyd’s grievance addressed one of many company violations, and his was evaded like the rest.

A year after the incident, Kentuckians for the Commonwealth found and publicized Lloyd’s story, connecting him with the Kentucky Resources Council. After two years, Nally & Hamilton has agreed to compensate Lloyd and rebuild his pond, a process that could take 10 years.

But for Lloyd, this isn’t just about his fishpond. It’s about protecting his neighbors from poisoned water when they won’t speak out themselves: “I don’t believe in giving up on something I know is right.”

Erica Urius worried about strip mining long before her water smelled like rotten eggs. TECO Coal began blasting above her hollow in the mid-nineties. Heavy truck traffic rutted the roads.

With help from Kentuckians for the Commonwealth (KFTC), Urius organized community meetings and protests, and filed grievances against TECO Coal. She and her neighbors slowly earned the company’s wary attention.

In 2004, TECO began blasting the ridge above Urius’s home. Not long after, Urius and her husband noticed something different about their water. They checked their pump and found it coated with a black, oily sheen. Researchers from Eastern Kentucky University tested the water – it contained over 100 times the safe levels of arsenic, in addition to high levels of iron, mercury, and manganese.

At the time, Urius’s daughter was three years old, and the orange stains in the bathtub, sinks, and toilet deeply concerned Urius. With KFTC’s support, she contacted TECO Coal, and the company began delivering water from city taps to her home.

Urius has requested direct access to city water, but she lives remotely, and digging a waterline would be expensive. TECO Coal tried drilling the family another well, but the water still ran orange.

“I think TECO thought we’d just get quiet after a while,” says Urius. “But my daughter will be six this month, and I still can’t let her play in the tub. So we still believe in what we’re fighting for.”

Larry Bush is quick to say that coal has been good to him – his father was a miner, as was he. He recalls picking blackberries down by the streambed near Exeter and hunting with his father in the mountains above the coal camp. “We’d wash the squirrels in the water and drink right out of the stream,” says Bush.

But in 1999, the streambed started running orange, and now the mountains are stripped to gravel and grass. The pool where the Exeter Methodist Church once baptized its congregation has filled with silt. Just across the road from town, the slope is clear-cut in preparation for mountaintop removal mining.

Bush has asked the Virginia Department of Environmental Quality (VDEQ) to test the water around Exeter for toxins and heavy metals. The VDEQ has mostly denied his requests.

But Bush has seen the orange water before in other mountain-stripped regions – the color could indicate heavy metals and a highly acidic pH.

After repeated calls, Bush convinced two biologists from the VDEQ to observe the stream behind his house. They assessed the stream’s biological diversity, and concluded that it was critically low – the stream was essentially “dead.”

With Southern Appalachian Mountain Stewards, Bush is working to gather community support against the Exeter mine. “I’ve got three grandkids,” he says, “and I don’t want them living in a desolate wasteland.”