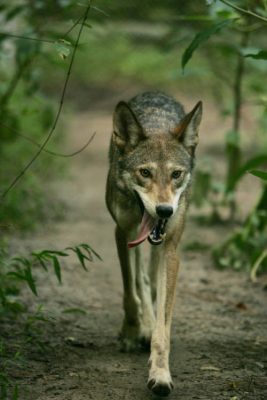 On June 21, the U.S. Fish and Wildlife Service announced a plan to decrease the protected habitat of the endangered red wolf in Eastern North Carolina by nearly 90 percent, even though the species has only 35 remaining members in the wild. According to the agency, this proposal intends to refocus conservation efforts on a smaller area since the program has been largely unsuccessful.

Creation of the original protected area was met with some public opposition from concerned livestock owners and coyote hunters. However, Perrin de Jong, a staff attorney at the Center for Biological Diversity — a nonprofit endangered species protection organization — says red wolves have only been responsible for five livestock deaths since 1997 and healthy wolf populations tend to push out coyotes.

“The Trump administration’s Fish and Wildlife Service is declaring open season to kill the last of America’s red wolves, which are on the verge of extinction,” de Jong said in a press release. If the new plan is adopted this November, hunters will no longer have to consult the Fish and Wildlife Service before killing wolves spotted outside of the 200,000-acre protected area in North Carolina’s Hyde and Dare counties.

According to conservationists, the key flaw of the reintroduction effort was the lack of community outreach and education about the benefits of protecting the species. A public comment period on the new proposal took place in July. ­— By Locke Curtis