{ Editor’s Note } This is the fourth installment in a five-part series illustrating the need for greater investments in residential energy efficiency as an economic driver in rural Appalachia.

I love my electric utility. In fact, as I write, I am wearing a hat they gave me.

Mountain Electric is a small electric co-op serving just over 30,000 members in the rural mountains of East Tennessee. They have a small staff, but are always willing to help out if I have a question or problem. They also seem to sincerely care about the people they serve, and work hard to address member concerns. One way they do this is by helping to reduce members’ electricity bills through energy efficiency incentives and limited financing programs.

I also love Mountain Electric because they are part of a team of co-ops exploring the development of a small-scale on-bill financing program for home energy efficiency in Tennessee. Even more, I admire the co-op model and their potential for doing good in the communities they serve, and I have developed a good relationship with my co-op, as all members should. That’s why I wear the hat.

According to the National Rural Electric Cooperative Association, as late as the mid-1930s approximately 90 percent of all rural homes in America were without electricity. This was due to the fact that the large power companies did not think it was cost-effective to run thousands of miles of transmission lines to areas with low population density.

With the signing of an Executive Order by President Franklin Roosevelt establishing the Rural Electrification Administration in 1935, and the subsequent passage of the Rural Electrification Act the following year, a lending program was put in place that supported the creation of rural electric co-ops, and everything began to change. By 1953, more than 90 percent of farms across the nation had electricity, and today, more than 900 co-ops provide electricity to more than 42 million people. 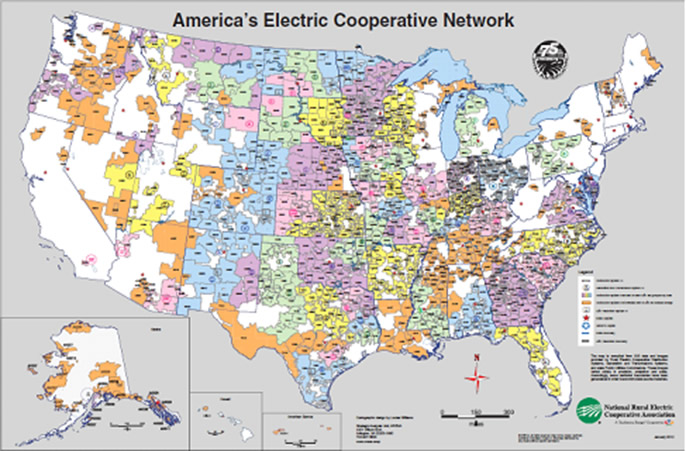 [Notes: For those interested, NRECA has put together a neat map showing the growth in the number of co-ops over time. Also, REA is now the Rural Utilities Service, or RUS, and is part of the U.S. Department of Agriculture.]

What distinguishes co-ops from investor-owned utilities is that they are non-profit entities owned by the utility’s electricity customers. Every “member” owns a share of the co-op, and, at least in theory, has a direct voice in decisions made by the co-op. In addition, unlike large profit-driven utilities, co-ops operate according to the Seven Cooperative Principles, which include a voluntary and open membership, democratic governance by members, economic participation, autonomy and independence, cooperation among cooperatives and concern for community.

The seventh principle, that of concern for community, is described by NRECA as “working for the sustainable development of communities through policies accepted by [the] members.” This principle speaks directly to the mission of Appalachian Voices’ Energy Savings for Appalachia program, which is to work with electric co-ops in Appalachia to alleviate poverty and generate new jobs through the creation of comprehensive home energy efficiency loan programs known as “on-bill finance.” With on-bill finance, the electric utility provides a “loan” to a customer to make a variety of home energy efficiency improvements such as weatherization, insulation and new energy efficient heating and cooling systems. After the improvements have been made, the customer repays the loan through an extra charge on their electric bill. The intent of these finance programs is for the annual savings to exceed the loan payments, thereby resulting in a net reduction in their electric bills.

Many co-ops across the Southeast already provide some sort of financial support or incentives, such as rebates and credits on electric bills, for their members to invest in energy efficiency (does yours?). However, most of the cost of the improvements still have to be paid upfront by the member. Currently only five co-ops in Appalachia–all located in Kentucky–provide financing for their members to make multiple efficiency improvements all at once.

Barriers to Implementation, and Resources Available to Co-ops

One thing to recognize is that many co-ops face significant barriers to developing and implementing energy efficiency programs of any kind, much less full on-bill finance programs. First of all, like my co-op, a lot of co-ops have limited staff, and it takes a significant amount of staff time to put these programs together and have them be effective.

Secondly, it takes money, something which most co-ops also do not have because their cost of generating or obtaining electricity and distributing it to their members is on the rise. Further, co-ops have to pay for constructing and maintaining the distribution system (transmission lines, transformers, etc). In addition, most co-ops are still paying off debts associated with loans received to cover past expenses.

Finally, in a lot of areas, the lack of an energy services industry (energy auditors, retrofitters, retailers) means that contractors would have to be identified and certified before an on-bill finance program can be implemented. Each of these factors may pose a significant challenge for a co-op interested in developing a financing program. However, there are a growing number of resources available that can help.

For starters, the USDA now has two (and potentially three) funding programs that co-ops can access in order to fund an on-bill finance program. The two existing programs are the Energy Efficiency and Conservation Loan Program, and the Rural Economic Development Loan and Grant Program. While the requirements and details associated with these two programs are much different, they both provide a significant amount of funding that co-ops can use to fund the program. Another similar initiative known as the Rural Energy Savings Program may become available by as early as 2015, and would provide zero interest loans to co-ops specifically for the purpose of developing an on-bill financing program.

In addition, there are many different models that exist all across the country that co-ops can reference in designing their own program (we wrote about two of them in our last post), and the USDA and others are in the process of developing toolkits and model program designs to help co-ops put a workable and effective program together. Growing interest is also leading many government and nonprofit entities to offer funding and other support for these programs. One such leader is the Southeast Energy Efficiency Alliance, which offers a variety of financial assistance for energy efficiency programs. Appalachian Voices has also been supporting and partnering with co-ops in our region who are taking steps toward developing an on-bill finance program.

While there is wealth of resources available to help co-ops navigate the process of designing, developing and implementing an on-bill financing program, the availability of these resources will itself not move a co-op to develop a program. If you are a co-op member, that responsibility lies with you.

Find out whether your co-op offers an on-bill finance program by visiting our Energy Savings Action Center, and if they don’t, then send a letter requesting that they develop one. Also, get out in your community and talk with your neighbors about how stronger energy efficiency investments can help strengthen your local economy and provide financial relief and greater comfort for those who need it.

Finally, get to know the people that manage your co-op. Call them up, stop in their office, invite them to a barbeque. You will find that they are good folks that care about you and your neighbors, and are willing to explore ways that they can do more to help all of their members. That is concern for community, and it’s the foundation of creating healthy, sustainable economies in Appalachia and elsewhere.