{ Editor’s Note }This is the second installment in a five-part series illustrating the need for greater investments in residential energy efficiency as an economic driver in rural Appalachia. A proven strategy is the creation of residential energy efficiency loan programs by rural electric cooperatives in the region. In this post, we explore the need for greater economic diversity in Appalachia.

Part 2: The Need for More Economic Diversity in Appalachia

Driving through rural Appalachia, you’ll notice that many towns are small and look a lot like each other, at least in terms of the types of businesses and other buildings that you see. This is what I see as I drive through Johnson County, Tenn.

My hometown of Trade is the stuff of legend. This is where Tom Dula — the infamous main character of many versions of the folk song “Tom Dooley”– was caught after killing Laura Foster in neighboring Wilkes County, N.C., in 1866. It is also the easternmost town in Tennessee.

A typical Appalachian town like Trade is made up of a couple of small churches, a post office, local hardware and grocery stores, a school or two and hopefully a library, a pharmacy, a couple of locally-owned restaurants, maybe a handful of chain restaurants, a dollar store and a gas station or two. Many of these are pillars of any community. None, however, are sources of significant employment.

There are those towns that have benefitted from large industrial or manufacturing plants, or extractive industries that employ hundreds to thousands of residents, and there are indeed towns and cities in the region with bustling and diverse economies. However, economic specialization — the concentration of employment in a small number of industries — has caused cycles of economic distress for many communities over the decades.

Sadly, many of the traditional industries have faded or declined substantially, leaving behind weakened local economies. As a result, for most of Appalachia, poverty, high unemployment and the lack of economic diversity are persistent problems that have yet to be addressed in any comprehensive, effective manner.

There is a strong need in the region for economic planners and local governments to make economic diversification the central goal in laying out their short- and long-term development strategies. According to the Appalachian Regional Commission (ARC), of the 420 counties that make up Appalachia, 201 are “Distressed” or “At Risk,” meaning that they rank among the worst 25 percent of the nation’s counties in terms of economic status. Another 206 are designated as “Transitional,” meaning that they rank somewhere between the worst 25 percent and the best 25 percent of the nation’s counties. Only 13 counties are designated as being economically competitive with other counties in the U.S. 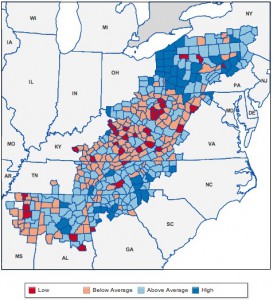 A Picture of Economic Diversity: According to the Appalachian Regional Commission, of the 420 counties that make up Appalachia, 201 are “Distressed” or “At Risk,” meaning that they rank among the worst 25 percent of the nation’s counties in terms of economic status.

To realize how diversification can help strengthen and sustain Appalachian economies, it is important to understand what economic diversity means. According to a report commissioned by the ARC, “a diverse local or regional economy is viewed as one which has a varied mix of industries and the absence of dominance of any one industry in terms of employment or income.”

The authors of the ARC report cite two of the major benefits of economic diversity as reducing exposure to economic downturns and creating new avenues for economic growth. They caution, however, that “diversity does not guarantee faster growth, higher incomes, or more widely shared prosperity.” While these outcomes would be ideal, for many Appalachian communities simply achieving the goal of economic diversity would be an important step toward strengthening their local economy, and reducing poverty and unemployment.

The question is: how does a small town of merely hundreds or a few thousand residents diversify their local economy? Focusing on a single industry is not enough. What is required is a comprehensive plan and locally-based initiatives that support and promote a wide variety of industries or businesses. As the ARC report asserts, there are several lessons to be incorporated into any strategy for diversifying a local economy.

First, a good diversification strategy is a matter of implementing many successful specialization strategies simultaneously. This means focusing on the strengths and assets that exist within a local community and support the development of each of those at the same time.

Second, a local economic diversification strategy should seek to fully assess and understand the “risk” associated with the existing economic base of the local community. This means assessing the demand for the goods and services that can be produced from the local economy. Anticipating possible boosts and disruptions to the economic base is important.

Finally, a successful strategy for economic diversity is based on a solid
foundation of analysis and research that helps to maximize the resources and assets available to the local community. It is also run by development professionals that leverage networks and expertise, and that have a process in place for thoughtfully and effectively implementing the economic development strategy.

Each of these are good recommendations for implementing a local economic diversification strategy. But first, the strategy must be developed, and each of us has a role in promoting any such strategy. So, what will you do to play a role in diversifying your local economy?

For my part, I will begin by speaking with my local electric cooperative and trying to work with them to invest more in residential energy efficiency for my neighbors and the community at large. But this is only one of many initiatives that could support new jobs and economic development where I live. What does your local community need? I would bet that energy efficiency is one opportunity for creating new jobs and supporting economic diversity.

Part 3 of this series describes how energy efficiency can serve as a key strategy in developing, strengthening and diversifying local Appalachian economies, and how rural electric cooperatives can play a key role in achieving that goal. We hope you’ll continue reading as we progress through this series.