{ Editor’s Note }This is the third installment in a five-part series illustrating the need for greater investments in residential energy efficiency as an economic driver in rural Appalachia.

Let’s consider our energy use for a moment, and how it might relate to our local economy.

I think of my refrigerator and other appliances, but most of all, of the energy I use heating my home. The house I live in doesn’t have air conditioning, so in the summer I keep the doors open and the ceiling fans running. However, despite having a well-insulated home with double-pane windows, I rely on old, energy-wasting electric baseboard heat to keep me warm in the winter.

Even though baseboard heat runs up my electric bill in the winter, my house is more energy efficient than the homes that many Appalachian families live in. A large number of those homes also rely on baseboard heaters, but also have drafty windows, lack proper insulation in their floors, walls and ceilings, and have inefficient water heaters and appliances. The people who live in these homes are typically poor and cannot afford to pay their electric bills during extreme winter and summer months, much less pay the upfront cost of improving their home’s energy efficiency.

A home energy efficiency loan could help a single family save hundreds of dollars each year that they might then spend in their community, or use to pay for other basic needs such as education and healthcare. Imagine what the impact would be if 100 homes received such a loan, or 1,000, especially in rural Appalachia, where many small towns are struggling to stay afloat. 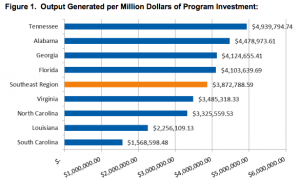 In addition, each home retrofit would require many different services such as home energy audits or the installation of new heating and air systems or insulation, for example, that more likely than not would be carried out by local businesses. Because most of the services associated with home energy efficiency can be locally sourced, a strong loan program could result in hundreds of thousands of dollars in new investment being added to the local economy. For many Appalachian communities, that would be a significant economic boost, and could result in the development of new local or regional industries and businesses, thereby creating jobs and helping to diversify the local economy.

Energy efficiency loan programs are not new. They have been popping up all over the place, in fact. We’ve written about South Carolina’s Help My House pilot program, which financed energy efficiency improvements for 125 homes, saving each an average of nearly $1,200 a year on their energy costs (almost $300 of which they were able to put in their pockets). In Kentucky, a program called How$mart Kentucky was developed that is saving residential participants an average of more than 20 percent on their electric bills. These two programs are good models for how home energy efficiency loan programs can save residents a significant amount of money. And each program was developed by member-owned rural electric cooperatives (co-ops), like my own co-op, Mountain Electric (who is yours?). 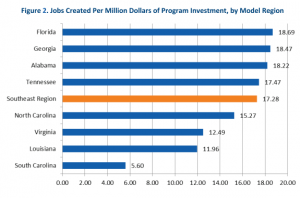 Jobs created by region per one million dollars invested in energy efficiency programs. Chart by Opower. Click to enlarge.

The greatest impact of these programs is the amount of local investment and the jobs created as a result of the home energy loans. For South Carolina’s program, the 125 loans generated $940,000 in new investment in the communities where the loans were provided. In Kentucky, the loan program generated more than $500,000 in new investment during the program’s 1-2 year pilot phase, and more electric co-ops are beginning to join the program. These two programs — and there are more than 30 more similar programs being offered throughout the U.S. — have resulted in approximately $1.5 million of investment in the communities where they have been implemented.

According to the Southeast Energy Efficiency Alliance, $1 million invested in energy efficiency in the Southeast generates between $1.5 million and $5 million in new economic output and creates between 5 and 20 new jobs. Energy efficiency investments generate a greater economic impact and create more jobs than the same amount invested in other industries, and those impacts are just the result of direct investment. The benefits increase as a result of the money that is saved. According to the American Council for an Energy-Efficient Economy, for every $1 million in investment, the home energy savings from efficiency programs have been estimated to create another 17 local jobs.

Looking at the potential savings for co-op customers in South Carolina, an economic analysis by Coastal Carolina University estimated that, if co-ops in the state committed to an full-scale energy efficiency loan program for 20 years, it would create more than 7,000 jobs and save co-op members $355.5 million annually.

If my own rural electric co-op, Mountain Electric, were to develop a program that allowed me to save money on my electric bills while also supporting my local economy, I would take advantage of the opportunity. Wouldn’t you?