{ Editor’s Note }This is the first installment in a five-part series illustrating the need for greater investments in residential energy efficiency as an economic driver in rural Appalachia. In this post, we explore the relationship between poverty and electricity costs, and how reducing costs can help alleviate the impacts of poverty across Appalachia.

When you think of poverty, what words do you associate with it? Many of us might think of words like “low-income,” “unemployment” or “homelessness.”

Unfortunately, it is not often that we associate poverty with electricity costs, because for many across the United States, especially those living in the South and Appalachia, electricity costs play a significant role in worsening the impacts of poverty.

Think about that for a moment. Imagine a family of four living in rural Appalachia, or anywhere for that matter, on a mere $20,000 a year or less. That family is spending approximately $4,000 each year just to maintain a level of comfort that many of us might take for granted. That leaves $16,000 for covering other basic needs such as food, health insurance, transportation, education, or other utilities such as water, telephone service or internet connection.

Now imagine that up to 40 percent of that family’s energy costs are the result of waste due to poor insulation, the use of inefficient heating/cooling systems and appliances, or inefficient lighting. That amounts to $1,600 a year — a staggering eight percent of our imagined family’s income — lost due to energy waste. And because our imaginary family is impoverished, they cannot afford to pay the upfront cost of making the needed efficiency improvements to their home that would provide significant savings on household energy costs.

Unfortunately, our imagined family is very real. This family exists all over the South and across Appalachia. According to the Appalachian Regional Commission, the average poverty rate in Appalachia from 2007 to 2011 was 13 percent higher than the average rate for the entire U.S. In some of the most rural parts of Appalachia — West Virginia and eastern Kentucky, for example — poverty rates were even worse: 22 percent and 73 percent above the national average, respectively. Across the region, high rates of poverty corresponded to significantly lower incomes, with Appalachian households earning approximately 25 percent less than the average U.S. household.

Most of these areas are served by rural electric cooperatives (“co-ops”), which were created nearly 75 years ago specifically for the purpose of providing electricity to the most rural of areas throughout the U.S. As Brian Depew of the Center for Rural Affairs pointed out, rural co-ops serve 327 out of 353, or about 93 percent, of the U.S. counties suffering the deepest and most persistent poverty. 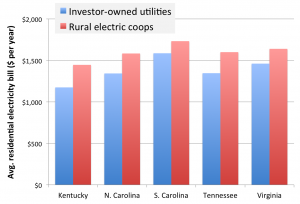 Customers of co-ops in the Southeast pay more for electricity on average than customers of investor-owned utilities in the same states.

Specific to Appalachia and the South, as Appalachian Voices reported back in February, more than 80 percent of all southeastern electric utilities (co-ops and other power companies) serve areas that had an average poverty rate above the national average of 16 percent in 2012. This holds true for rural co-ops, as approximately 80 percent of co-op service areas in the Southeast had a higher poverty rate than the U.S. as a whole.

In addition, electric utility bills for co-op members in the Southeast were 8 percent higher in 2012 than for customers of investor-owned utilities. Therefore, annual electric bills serve as a much greater burden on family income for residents served by rural co-ops than for those served by other electric utilities.

While rural electric co-ops are not the cause of poverty in Appalachia and the South, the decisions they make — or do not make — affect families’ ability to make their homes more energy efficient in order to reduce their energy costs. In other words, rural electric co-ops and other electric utilities, can play a significant role in alleviating poverty in Appalachia and throughout the Southeast by making stronger investments in home energy efficiency.

In part 2 of this series we explore the lack of economic diversity in Appalachia, and illustrate how investments in energy efficiency can create jobs while strengthening local economies.