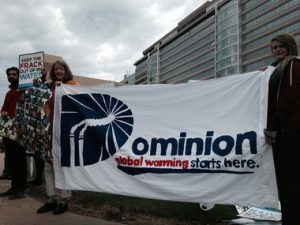 Activists in Ohio and shareholders from throughout Dominion Virginia Power’s service area including Virginia converged on Cleveland on Wednesday, to greet the company’s CEO, Thomas Farrell, board and shareholders as they gathered for Dominion Resources’ annual meeting.

A demonstration was organized outside the meeting by the Ohio Sierra Club, Ohio Student Environmental Coalition and the Energy Action Coalition. “Energy independence and curbing climate change starts and ends with clean energy sources like wind, solar, and geothermal — and that’s what we’re calling for today,” said Brian Kunkemoeller, conservation manager at the Ohio Sierra Club.

In April, Dominion Virginia Power went before the Virginia State Corporation Commission (SCC) for review of the company’s 15-year integrated resource plan. While the UN Intergovernmental Panel on Climate Change (IPCC) urges that the next 15 years is a critical window to act to cut carbon pollution, Dominion still generates no utility-scale wind or solar power in Virginia. Instead of developing these renewable resources, Dominion is proposing seven new highly polluting power plants in the state over the next 15 years.

Shareholders hammered on this inconsistency at the general meeting. Speakers at the SCC hearing included State Senator Adam Ebbin who delivered a letter signed by 12 Virginia elected officials urging renewable energy and efficiency investment, and a class of middle school students speaking in favor of increased use of cleaner sources to benefit the climate and create good jobs.

Inside Wednesday’s meeting, Dominion faced unprecedented levels of shareholder concern over the financial and environmental risks of expanding its dirty energy portfolio. Of six shareholder resolutions presented, four were brought by Virginians concerned about the company’s failure to address and act upon the risks of climate change. Each of these four resolutions garnered more than 20 percent of the shareholder vote, compared to previous years in which only one sustainability resolution, focused on the financial risks of climate change, had garnered around 10 percent of votes in support. (In 2013, that resolution received a then-unprecedented 22.6 percent of shareholder votes.)

“I have been involved in shareholder advocacy with Dominion since 2008, and I am saddened and frightened by their continued negligence on climate change,” said Ruth McElroy Amundsen, a shareholder from Norfolk, Va. “Dominion is the largest carbon emitter in a state where coastal cities like mine already see regular and costly flooding due to sea level rise. The resolution I presented this year asks Dominion to set a clear goal for reducing its greenhouse gas pollution, as opposed to the nearly 60 percent increase they are projecting over the next two decades.”

Specifically, the resolutions presented by Virginia shareholders call on Farrell and Dominion’s board to:

“Climate change is already impacting Dominion’s bottom line. In fact, the company recently moved to raise electric rates for Virginia customers by over 4 percent due to rising gas prices linked to this winter’s extreme weather,” said Emily Heffling, Virginia Field Organizer at the Chesapeake Climate Action Network, who presented the financial risk resolution. “If Dominion refuses to be part of the solution, the least the company should do is come clean on the costs to shareholders. Many other large U.S. companies are conducting assessments of business risks posed by climate change, and our resolution simply asks Dominion to provide the same transparency.”

Activists were also protesting Dominion’s plans to build a liquefied natural gas export facility at Cove Point, Md. For more on the worrying ironies in play where that proposal is concerned, read this Plain Dealer op-ed, “Dominion shareholders should slow rush to export liquefied natural gas,” by Mike Tidwell and Robert Shields.