Bio-energy Creates A Mass of Questions 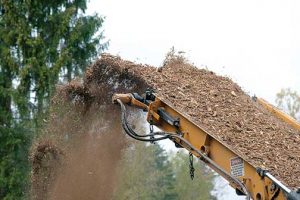 The uptick in woody biomass harvesting across the Southeast, partially driven by increased European demand for wood pellets, has set off a debate about how, and if, forest biomass can be harvested sustainably. Image copyright Kurmis/iStockPhoto

Biomass: it’s a new word but an ancient energy source.

For much of the world, the practice of gathering energy from organic material — the “bio” in “biomass” — is an everyday affair. Worldwide, about 146 billion tons of biomass are produced every year.

However, the growing interest in biomass as an alternative energy source in the United States is igniting a philosophical firestorm about how, and even if, biomass could be a sustainable option for future needs.

‘Wood’ this be the best source?

Although biomass can take the form of any biological material, most efforts focus on the resource that best defines the region — the trees that cover Appalachia’s mountains and valleys.

Biomass is sometimes touted as a carbon-neutral source because any carbon dioxide released into the air from incinerating plant material may be absorbed by the next generation of plant growth. Burning fossils fuels, on the other hand, releases carbon dioxide that has been confined in the earth’s crust for eons.

Biomass power generated around 1.4 percent of the national supply of electricity in 2012, according to the U.S. Energy Information Administration. Wood — including tree stumps, dead trees, logging debris, chips and even yard clippings — leads all other sources of biomass.

The sustainability of using woody biomass rests on the methods used to obtain it, especially if the material is removed by simply clear-cutting trees for fuel rather than gathering debris left behind by logging. And even gathering too much downed wood can harm a local ecosystem because it often provides essential habitats for wildlife.

Is the road to hell paved with wood intentions?

In recent years, residual biomass has been touted as the Holy Grail of sustainable biomass production because it only uses the leftovers from timber cutting rather than clear-cutting trees to burn as fuel. But, as skeptics point out, using logging residues for fuel could pave a slippery slope toward widespread clear-cutting, or worse yet, harvesting old-growth forests that most agree should be protected.

“It’s a complicated issue, and few, if any, are currently doing it right,” says Debbie Hammel, senior resource specialist at the Natural Resources Defense Council. NRDC has partnered with the Dogwood Alliance, an Asheville, N.C.-based advocacy group, to oppose industrial-scale biomass operations throughout the Southeast.

The groups claim that, although some forms of biomass can be termed renewable, the use of entire trees and forests should never be included under that umbrella. As part of their effort, the Dogwood Alliance is calling for a moratorium on the use of whole trees to create wood pellets for stoves.

Biomass operations, the groups say, should be implemented in a way that will “reduce near-term carbon emissions compared to fossil fuels; will not adversely impact forests, carbon sinks, soil, wildlife habitat, biodiversity and water resources; and will not result in net increases to local air pollution.”

Hammel says that many southeastern utility companies — such as Dominion Virginia Power — are breaking into the biomass business and investing in large-scale plants. Dominion recently announced the conversion of three Virginia coal plants to woody biomass.

The increase in utility-scale biomass has potentially substantial environmental implications. According to Hammel, a 2012 Wall Street Journal investigation found that 85 of 107 U.S. biomass plants had been cited for violations of both clean water and air standards.

But in July, a federal court ruled that biomass carbon dioxide emissions should be regulated under the same sections of the Clean Air Act as other polluting industries, closing a U.S. Environmental Protection Agency loophole that had previously exempted biomass producers from greenhouse gas regulations.

“Burning trees to generate electricity is dangerous, polluting, and ought to be limited to protect people and the environment,” Kevin Bundy of the Center for Biological Diversity’s Climate Law Institute stated in a media release about the court’s decision. 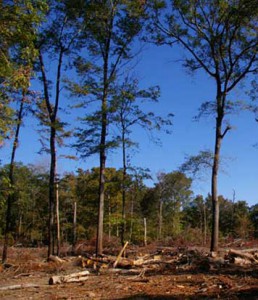 Critics of woody biomass worry that poor practices create greenhouse gas pollution and eliminate forest habitat. Groups like the Forest Guild are trying to encourage practices such as sustainable harvesting of debris left from already-logged timber tracts, which involves leaving as much as 30 percent of the “residue” behind for wildlife habitat. But research has yet to determine how sustainable the idea will prove to be. Photo by Alex Finkral, courtesy the Forest Guild

When limited to the leftovers from timber operations, there are ways for woody biomass harvesting to be practiced sustainably, according to the Forest Guild.

The Forest Guild, a professional organization of forest stewards, recently released a guide to best practices in biomass harvesting in the Southeast. The guidelines warn that while deadwood and logging debris provide crucial habitat that supports biodiversity, sustainable methods can be employed to balance energy needs with ecological concerns.

To achieve that balance, the report recommends that on an average logging site with existing deadwood, about 30 percent should be left for the more than 55 mammal species, 20 bird species, numerous reptiles, amphibians, arthropods and gastropods that rely on deadwood for habitat.

Michael Jacobson, a professor of forest resources at Pennsylvania State University, agrees, mentioning that the state of Pennsylvania also recommends that at least 30 percent of logging residue be left behind untouched. He adds that, if such practices are maintained, using residual woody biomass can be sustainable.

“Harvesting and using [woody biomass residue] as an energy source makes a lot of sense,” he says.

Chris Moorman, an associate professor of fisheries, wildlife, and conservation at North Carolina State University, says that although some kind of standard needs to be developed for what goes and what stays in a harvested forest, more research must be done first. And Moorman is doing just that — co-leading an effort to see if leaving a portion of harvestable biomass improves habitat for wildlife, especially species that depend on downed wood.

“It’s common for biomass harvesting guidelines in other states to recommend this practice, but there is little empirical evidence to help guide development of the specifics,” he says.

The Forest Guild report recommends that woody biomass harvesting should be integrated with other forest operations, and advocates using low-impact logging techniques to protect soil from rutting or compacting.

From the standpoint of Appalachian communities near biomass operations, the debate can grow as thorny as some of the forest ground that’s under such deep scrutiny.

A proposed biomass project in Penrose, N.C., generated a groundswell of local opposition this spring, as residents feared health problems and sooty air pollution from the $22 million plant, which would use garbage and wood chips to generate power. Although officials from Renewable Developers, the project’s backer, claim that the process would not require actual burning of the material, residents are concerned the project will skewer home values and create noise, light and water pollution.

Despite such fervent opposition at the local level, others say biomass production can be a boon for area economies. Jingxin Wang, a professor of wood science and technology at West Virginia University, says that biomass and similar sources could supplant coal as the region’s next economic powerhouse.
“The major need for the region is to increase jobs and improve economic health,” Wang says. “There are approximately three million acres of timberland with an estimated 190 million dry tons of above-ground woody biomass in the area.”

Wang is leading a research team to explore the impact of woody biomass in Central Appalachia. The team recently received a $350,000 grant from the U.S. Department of Agriculture.

While researchers like Wang and Moorman continue to investigate the environmental and economic questions posed by woody biomass, sustainably harvested forest material from residual debris and already-logged tracts may yet offer some advantages.

However, until producers, local residents and environmental groups can agree on a balanced strategy, it’s likely that biomass — at least the woody variety — will remain a fragile sapling of alternative energy among a huge forest of uncertainty.

Stay tuned for future stories exploring the promises and perils surrounding various forms of bio-energy in upcoming issues of The Appalachian Voice.