Beyond Renewable: The Cutting Edge in Energy

The use of clean energy has increased in the nation since 2005, according to the U.S. Energy Information Administration. While renewable energy is mostly used in more traditional ways, such as powering homes or businesses, in recent years U.S. researchers have dug up new ways — from wave energy to micro-cell technology — to generate and maximize energy use. 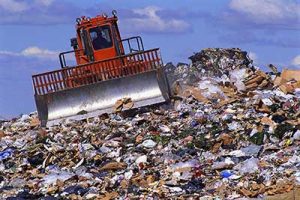 In landfills, the decomposition of waste generates methane that normally escapes into the atmosphere. By capping a landfill and capturing its gases, the resulting combination of approximately 50 percent methane and 50 percent carbon dioxide can be used to generate energy while simultaneously reducing greenhouse gas emissions. In Burnsville, N.C., landfill methane has been used since 1999 to power glass blowers and a pottery kiln at an art center called EnergyXChange. The methane also supplies radiant heat for greenhouses, offices and an art gallery. As of June 2012, there were 594 methane-capture operations in the United States, with another 540 candidate sites. Learn more at energyxchange.org.

Powered by the People 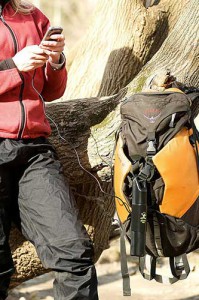 The nPowerPEG is a personal energy generator created in 2009 by Aaron LeMieux when he wanted to harness the kinetic energy he generated while hiking the Appalachian Trail. This device harvests power created through walking, hiking or biking and can be carried in a book bag or pocket. At 10 inches long and one inch wide, the nPowerPEG can charge smaller items such as cell phones, GPS devices or music players. Learn more at npowerpeg.com.

While the use of solar panels is relatively traditional, West Virginia University graduate student Scott Cushing has discovered a way to make solar cells more effective. Normally, solar cells can only collect a limited spectrum of light. But by using plasmons, or tiny oscillations within particles, nanoparticles within the solar cell are able to better absorb more spectrums of sunlight. This is because plasmons help the metal in the nanoparticles act as if they were hundreds of times their size. “It is as if the plasmon is a tiny antenna specifically tuned to absorb sunlight then give the energy to the solar cell — just like the antenna on your car collects faint radio signals and gives it to your stereo to be output through your speakers,” Cushing told West Virginia University news.

Numerous rare minerals are used to produce electric vehicles and wind turbines, which can be very costly. But through the REACT project, 14 universities and laboratories, including Virginia Commonwealth University, are researching more common alternatives, such as carbon-based magnets and iron-nickel-based super magnets. If successful, the project would help lessen the country’s dependence on foreign nations for rare minerals and would support the use of electric vehicles and green energy.

Another carbon footprint-reducing method of creating energy (compared to burning coal, oil or the methane from landfills, at least) is using gases from incinerating landfill waste to produce energy. Unlike capping landfills and collecting methane, waste-to-energy is recovered by incinerating the trash, a process that converts non-recyclable and non-hazardous waste into energy and leaves only about 10 percent of the original volume as ash. Currently, there are 86 waste-to-energy sites in the United States, including one in North Carolina and five in Virginia. 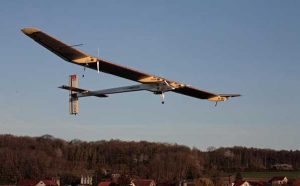 Started in 2009 by a Swiss company with the goal of flying around the world, the first solar-powered plane flew across the United States in July of this year, charged by more than 11,000 solar cells. The Solar Impulse reached a top speed of 45 mph and an altitude of 30,000 feet. Flying out of Washington state, the Impulse stopped in Phoenix, Dallas, St. Louis, Cincinnati and Washington-Dulles International Airport before landing at JFK Airport in New York nearly 60 days later. Learn more at solarimpulse.com