Whether through a power plant or from the home, solar energy’s future is bright 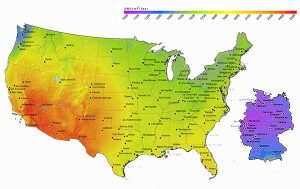 The demand for solar is not always where it is the sunniest. According to a 2009 Appalachian Regional Commission energy report, solar insolation (or the hours per day of sunlight) in Los Angeles, Calif., is 5.62 kWh/m2/day during peak output; it is 2.63 kWh/m2/day in Hamburg, Germany. “This clearly suggests that Germany’s current leadership in cumulative solar installations is less related to insolation than it is to [government] subsidies,” says the report. Map from the National Renewable Energy Laboratory.

In a meeting earlier this year with U.S. Department of Energy employees, the secretary of energy was blunt about solar power.

“I would argue that the scale and time frame of the impact of solar technology is underestimated,” Ernest Moniz said. “There are many situations today when solar is, in fact, competitive.”

Solar is the fastest-growing new energy source in the United States. In the first quarter of 2013, the nation installed 723 megawatts of it, up 33 percent over the first quarter in 2012. Solar saw a .14 percent share of national energy production in all of 2012, and analysts are predicting that more than 4 gigawatts will be installed in 2013.

In California, due to a continued drop in component prices and helpful state policies, solar is more than competitive. It is close to reaching grid parity, where installing solar power is less expensive than buying electricity from the energy grid, and many analysts believe the rest of the states will follow within a decade.

But solar’s long-lasting success in the mountains will depend on more than just sunlight. 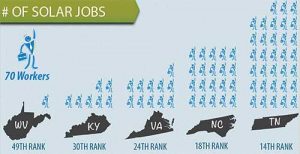 Large electric utilities are prone to seek out solar energy only if there is a requirement or obligation to move past currently cheaper fossil fuels. Power from the sun only becomes accessible, at least in the monopolistic markets of Appalachia, through political and economic fights.

The solar farm — set to be placed on 750 acres of reclaimed strip mine land in southeastern Ohio — was ready to start at the beginning of this year. And with a brand-new factory that had already won awards, Isofoton North America was ready to manufacture about 250,000 panels for the project, which American Electric Power Ohio planned to use to meet Ohio’s 2025 renewable energy standard.

But then, on Jan. 9, the Public Utilities Commission of Ohio voted on AEP Ohio’s plan to pass the $180 million cost of the solar farm to their electric consumers. Turning Point, which would have created about 700 jobs and been the largest solar project east of the Rockies, was voted down 3-1.

Akron-based FirstEnergy — a competitor to AEP Ohio who has opposed the state renewable energy and energy efficiency standards — was against the project from the beginning. It argued the solar farm would over-comply with the state’s current solar mandate, and the commission ended up agreeing, saying the project would not benefit ratepayers and the public interest.

However, the board did praise the merits of Turning Point, and state utilities commission staff had said previously that the project was needed, which was part of the reason why Michael Peck, chairman of Isofoton North America, was so surprised at the ruling. The project partners had laid the groundwork for the project for four years, but it wasn’t enough.

“To me, there’s a basic lack of understanding of renewable energy,” he says of Turning Point’s quandary. “There’s not a real commitment to job creation.”

Months after the decision, the Isofoton factory is still scrounging for customers, but the company is digging its heels in, taking the advice from the state utilities commission that it try to find new customers such as universities to sign long-term power purchase agreements for Turning Point’s solar power.

“We have to try, as much as we can, to keep politics out of Turning Point Solar,” Peck says. “We’re trying to create the new economy and we put our money where our mouth is.”

In central and southern Appalachia, Duke Energy has been the biggest solar backer among utilities. With encouragement from North Carolina tax credits and a renewable energy standard, Duke Energy Progress saw nearly 70 megawatts of solar added in 2012, the eighth-most in the nation among utilities, according to the Solar Electric Power Association.

That same year, utilities nationwide accounted for 53 percent of all new solar installations, up from 32 percent in 2010, according to the Interstate Renewable Energy Council. Centralized projects, such as solar farms, are the biggest reason for that increase in utilities, and those that are built and owned by third-party developers made up 93 percent of utility solar installations last year.

Utilities, at least in places such as California and North Carolina, are using solar developers to great benefit. In Tennessee, however, there is no renewable energy standard, and some public interest groups — such as the nonprofit Statewide Organzing for Community eMpowerment — feel that the Tennessee Valley Authority is constraining the solar market by limiting its Green Power Providers program’s yearly generation goal at 10 megawatts.

TVA’s Green Power program is designed for third party developers who work with residential rooftops and smaller solar installations. Every year, TVA accepts applications for developing that solar capacity, and this year its offerings were quickly claimed by the growing demand from small solar businesses. As a result, the solar market for small developers in Tennessee was effectively closed for the year by May. An additional 2.5 megawatts, offered in August, was claimed in a single day. Steve Johnson of the solar contractor LightWave Solar said in The Tennessean that “TVA’s solar programs should never close. TVA should never deny the market access to the grid.”

TVA’s solar program was notable last decade because it helped to spur Tennessee into the 14th-ranked solar job state in the nation. And though the public utility announced it is working with Strata Solar to develop two 20-megawatt solar farms, it still controls access to the energy grid for solar developers and homeowners, — and the states where the grid is controlled by a few are often the toughest for a developing industry.

Andy Arnette, a professor of decision science at the University of Wyoming, has an estimate of how far solar can go in central Appalachia.

Using a model that adjusts for land uses, costs and emission reductions, he’s estimated that between the mountainous parts of West Virginia, Kentucky, Virginia, North Carolina and Tennessee, utility-scale solar farms could replace 3.33 percent of current coal-fired generation in the region. Energy from coal is estimated to produce more than 80 percent of the region’s power, compared to 37 percent nationally in 2012.

Part of the trouble with building centralized solar farms in Appalachia is geography, he says, meaning that expensive changes to the energy grid and additional transmission are needed to properly support optimal solar farm capacity.

According to Arnette, current infrastructure could better support distributed solar (see story on p. 10), which is often produced on rooftops, or at or near the point where it is used. Such rooftop arrangements could presently replace more than 12 percent of current coal-fired generation in the region, if there are some changes up-top.

“There needs to be a better relationship between the utility companies or third parties and homeowners,” Arnette says, “because not everybody can afford to put this [solar installation] on their building.

Policies favoring net metering, when customers are credited on their energy bill for any excess energy that is generated on their site and third-party developers can help install solar on more homes, could remove the heavy upfront costs. Current state legislation throughout Appalachia, however, doesn’t help consumer becomes energy-independent, says Arnette, and the power companies don’t have the motivation to help those policies.

But the upshot, says Arnette, is that “solar jobs are really wherever the sun shines.” According to the Institute for Local Self-Reliance, each megawatt of solar power generates as many as eight jobs and $240,000 in economic activity, and sun-powered projects are typically larger boons for local economies than fossil fuel sources. The national solar energy workforce, which entails everything from manufacturing to development, has grown almost nine times the national employment rate since 2010.

While North Carolina holds the solar standard in Appalachia, there are bright spots all around the region: A jail in southwest Virginia recently unveiled the state’s largest rooftop solar thermal installation, which is expected to save them up to $40,000 a year; The Wall Street Journal recently featured Rep. Thomas Massie’s solar-powered Kentucky home; the Duck River Electric Membership Cooperative in Tennessee became the first distributor in the TVA system to construct a solar farm for its members; and Georgia Power was just ordered by the state’s Public Service Commission to add 525 additional megawatts to their 210-megawatt solar production plan.

Lauren “Bubba” McDonald, the commissioner who first proposed the solar requirement on Georgia Power, insisted in the Atlanta Journal-Constitution before the ruling that the move was a hedge against volatile fossil fuel prices.

“I don’t know what gas prices will be in six years. But I know the sun will come up, and it’s free. It’s not owned by Georgia Power, it’s not owned by Bubba McDonald, it’s not owned by the Public Service Commission,” McDonald said. “It’s free. And to deprive people of the opportunity to take advantage of technology, to me, is wrong.”