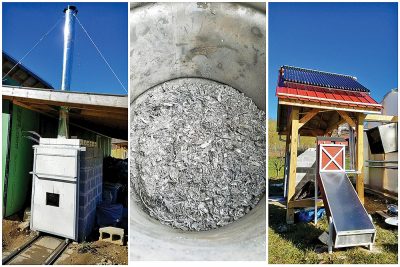 From left to right: the biochar kiln at Against the Grain Farm; a finished 10-pound batch of biochar; and the food dehydrator at Springhouse Farm, with a rooftop solar thermal array and biochar kiln behind. Photo courtesy of Nexus Project/ASU.

The kiln at Against the Grain Farm in Zionville, N.C., is fired, turning biomass — wood, sorghum stalks, and animal bones — into biochar, a soil amendment similar to charcoal. Hot gas is released through the process, flowing from a tube through a plant dehydrator to heat a thermal water tank. The heated water drawn from the tank passes through small irrigation tubes below rows of vegetable plant starts, heating the young plants inside the farm’s passive solar greenhouse, which is designed to collect heat from the sun in the winter.


When the biochar is removed from the kiln, it isn’t yet ready to be added to soil. Biochar’s value as a soil amendment comes from providing a porous home for beneficial microbes. At Against the Grain Farm, the biochar is inoculated with these microbes by soaking in compost tea, a nutrient-rich liquid formed by steeping aged compost or worm castings in water. This charges the medium like a battery.

“Soil is the soul of the farm. It is the bridge of what’s deeper down in the subsoil and everything that happens above — weather, climate, the solar system,” says Holly Whitesides of Against the Grain Farm. “Adding compost and making it a foundation of our farm increases our production and offsets the risk of disease, pests and weather, helping us meet expenses on our small farm.”

This combination of different technologies into one system is a result of Appalachian State University’s Nexus Project. Between 2013 and 2018, Nexus brought together a team of professors and students to design the system at their site in Boone, N.C., and then shared the model with small-scale farms in the community.

Each design is unique to the farm but employs technology that can be built in local communities and is low-cost and user-friendly. The Nexus system focuses on biochar production but also has solar thermal panels to heat water when the kiln is not in use, an efficient storage tank for the heated energy, a root-zone heating system for plants, and a dehydrator for the gas exhausted from the kiln.

Biochar is made by interrupting the decay or burning of wood or other types of biomass. By heating the source material in a chamber with limited oxygen, 50 percent of the wood or other biomass is turned into a stable carbon form that does not break down.

“It’s non-biodegradable in human scale terms,” says Dan Hettinger, biochar facility manager at Living Web Farms in Mills River, N.C. “Otherwise if it rotted or was burned, it would release that carbon into the atmosphere as carbon dioxide. We are literally sequestering carbon and we have third-party verification that this process is carbon negative.”

Living Web Farms, which has been working on biochar systems for the last five years, uses the biochar on its pasture with cover crops and livestock. According to a blog post by Hettinger, Living Web Farms yields an average of 7,400 pounds of biochar each week, which could sequester 5,189 pounds of carbon. Hettinger calculated that his 60-mile, round-trip work commute emits about 290 pounds of carbon weekly, which means the farm sequesters roughly 18 times more carbon each week than is created by his commute. 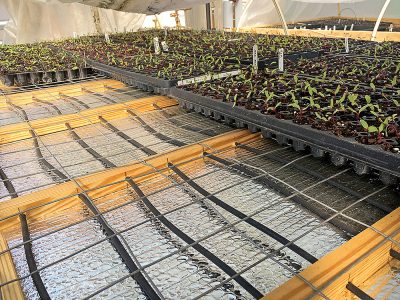 Above, tubes running through the greenhouse at Springhouse Farm use excess heat from the biochar process to warm seedlings. Photo courtesy of Nexus Project/ASU.

At Watauga County’s Against the Grain Farm and at nearby Springhouse Farm, the Nexus team worked with farmers to integrate the existing farm infrastructure into a daily system that allows them to create multiple benefits from the biochar-making process.

Both farms are highly diversified, each growing over 50 different varieties of vegetables for farmers’ markets, restaurants and their farms’ weekly subscription boxes. Both farms are also certified organic and focus on building the soil.

While Against the Grain Farm and Springhouse Farm are just beginning to explore the multiple uses of their new Nexus biochar systems, Springhouse Farm has already seen a 60 percent reduction in its propane use by transitioning to root zone heating from the farm’s blower heater. This allows the farm to more economically establish its own plant starts during the winter while reducing its carbon footprint.

As the Nexus team continues to work with Springhouse Farm and Against the Grain Farm to incorporate the systems into everyday farm life, the team is also experimenting to find the most efficient biomass feeder stocks for biochar, according to Dr. Ok-Youn Yu, principal investigator for the Nexus Project and a professor at Appalachian State University. Animal bone, sorghum waste, wood chips, and Christmas trees are all being tested to understand how those biochar products improve soil health.

Yu says, “Nexus research on greenhouse heating systems serves community by enhancing access to fresh local produce, farmers by increasing their income throughout the year, and the local environment and economy by conserving fossil-fuel energy and expense while reducing greenhouse gas and smog emissions normally associated with greenhouse heating and transportation of non-local produce.”

For more information about the Nexus system, visit ok.tec.appstate.edu/biomass. For Dan Hettinger’s blogs and videos about how to make a biochar system, visit livingwebfarms.org.