Before construction was finished on the gasification plant in Lebanon, Tenn., in October 2016, over 16 million pounds of wood waste, tires and treated sewage went to the landfill annually. Now, the gasification plant turns that waste into power to meet a third of the energy needs for the city’s wastewater treatment plant, the single largest consumer of electricity in Lebanon. 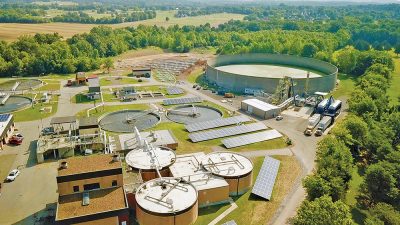 Gasification — the process of converting carbon-based fuels like wood, coal or chicken manure into gas without combustion — is typically achieved by heating the fuel, or feedstock, to a high temperature in an oxygen-starved environment. Additionally, it produces a charcoal-like byproduct, biochar, that can serve as a valuable agricultural soil additive.

While the vast majority of gasification plants use coal or other fossil fuels as part of their feedstock, the number of plants that use biomass or landfill waste is “expected to grow,” according to the Gasification and Syngas Technologies Council.

According to Scott McRae, project manager of the Lebanon, Tenn., gasification initiative, the feedstocks “molecularly fall apart” when they reach over 1,500 degrees.

“Literally, they’re just falling apart,” he says. “And what they’re falling apart into is gas. So we siphon that gas off into a thermal oxidizer 20 feet away, basically a giant combustion vessel.”

According to the air pollution permit issued by the Tennessee Department of Environment and Conservation for the Lebanon gasification plant, the facility uses a cyclone filter to limit particulate matter emissions from both wood drying before gasification and from burning the syngas. Some pollutants like particulate matter, sulfur dioxide, carbon monoxide and other gases, are still emitted, however.

“[Particulates are] very toxic as they have other compounds attached to them,” Zeller says.

But Hugh McLaughlin, chief technology officer of NextChar, a manufacturer and supplier of biochar, says that the “high temperatures guarantee the destruction of virtually everything,” and that gasification is a way “to get away from the practice of landfilling, which we’ve relied on for a long time.”

“It’s a matter of getting a balance between the benefit of getting rid of this wastestream and some natural energy recovery to the rather modest increment of existing pollution in the atmosphere,” McLaughlin says.

According to Snyder with Aries Clean Energy, the only other byproduct of the Lebanon plant’s gasification process is biochar, a charcoal-like material that is primarily used as an agricultural fertilizer, but could be used as a coal substitute in power plants.

The University of Tennessee is currently studying the effects of Lebanon’s biochar on soil and crop yields.

Biochar has been used as an agricultural amendment for at least 8,000 years, according to Albert Bates, a lawyer who has written several books on the benefits of biochar. According to Bates, adding biochar to compost makes both materials a stronger soil amendment.

“It’s not a physical process, it’s not a chemical process — it’s a biological process,” Bates says. “What you’re really adding to the soil are microbes, nematodes, earthworms, fungi and bacteria. And the way you get all that is from the compost pile.”

According to Bates, the high temperature used in the Lebanon plant to break down the toxins in the tires and treated sewage leads to the resulting biochar not being porous enough to provide much benefit to the soil, though it can be used as a replacement for sand in concrete and asphalt.

“It actually helps the concrete self-heal when it cracks,” Bates says. “It has a lot of good applications besides agriculture, all of which have the effect of storing carbon out of the atmosphere.”

With roughly 800,000 chickens at his Wardensville, W.Va., poultry farm, Joshua Frye has a lot of poop to deal with — about 660 tons a year. So when Frye was looking to offset propane heating costs for his chicken houses at Frye Poultry, he decided to put the stuff to use. In 2007, he built a $1.2 million gasification unit right next door, $550,000 of which was funded by a U.S. Department of Agriculture Conservation Innovation Grant. 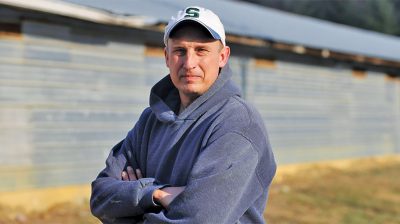 Joshua Frye stands in front of one of his chicken houses at Frye Poultry. Photo courtesy of Joshua Frye

According to a USDA report, the project saves Frye between $20,000 and $60,000 a year in propane costs. Additionally, since the propane fuel Frye previously used emits 0.8 gallons of water for every gallon of fuel burned, water was mixing with the nitrogen in the manure and causing ammonia emissions when the chicken houses were aired out. Heating with the gasifier is much less humid, leading to healthier chickens and reduced ammonia emissions.

The report also stated that the only emissions of concern, nitrogen oxides and particulate matter, were easily controlled and “below the need to permit.”

While poultry manure is already a nutrient-rich fertilizer, it can also provide soil benefits as biochar since minerals remain after gasification. And with the biochar, Frye says, “the nutrients are locked into the carbon, so they’re water insoluble.” The nutrients in chicken litter, however, easily wash away and cause water pollution.

Frye still sells chicken litter as fertilizer for $10 per ton, but can earn between $500 to $1,000 per ton for the biochar even though it’s 30 percent the mass of the manure.

Joe Kapp, entrepreneur in residence at Eastern West Virginia Community and Technical College, aims to help Frye expand the biochar industry in Appalachia. He says the main challenge is that “there hasn’t been a lot of testing for the various functions that it can serve.”

According to Frye and Kapp, tests performed by USDA research chemist Isabel Lima have shown promise. Lima’s research shows the biochar “shines better” in poor or eroded soils. It also can help soils retain water and nutrients for longer periods of time.

When Frye’s biochar samples were first tested, they came back positive for arsenic. Arsenic was being added to chicken feed in the United States to fight disease — meaning there was possibly arsenic in the chicken meat, the biochar and the gasifier’s emissions for a time.

According to Frye, his chicken feed supplier removed arsenic in 2009. The U.S. Food and Drug Administration states that the last poultry feed supplement containing arsenic was discontinued in the United States in 2016.

Lima says in the later samples she received, there was “no detection of arsenic whatsoever,” and “heavy metals of potential concern were either not found or present in negligible amounts.” On the contrary, she found that since the biochar was porous and negatively charged, it could attract heavy metals like a sponge — and thus could treat water polluted by mining runoff.

Blue Ridge Environmental Defense League’s Zeller, however, remains skeptical of gasification — even with biochar as part of the equation.”That doesn’t get around the fact that you’ve emitted all this air pollution and other toxic air pollutants into the atmosphere,” he says.

Kapp and Frye see potential for gasification and biochar in the region. “People will begin to discover that there’s significant resources and opportunities in … not just chicken biochar but all waste products,” Kapp says.

“It’s an exciting area for Appalachia, especially as we see opportunities in some of the more historic industries declining,” he says. “This represents a new growth opportunity that has the potential to be significant for all of Appalachia.”