It’s no wonder that fossil fuels are entrenched in modern society. Utilities, and the policies that govern the electricity market evolved in an era dominated by fossil fuels. So did government support. Generous subsidies and loan guarantees allowed the coal, oil and gas industries to rise to prominence.

Today, that prominence and much of that government assistance continues. The Sanders-Ellison “End Polluter Welfare Act,” introduced in the U.S. Senate in 2012 to cut fossil fuel subsidies, estimated U.S. tax breaks and incentives to the big three at $11.3 billion annually.

It’s a national and global trend that rings particularly true in Appalachian states. Downstream Strategies, an environmental consulting group, studied the Virginia coal industry’s impact on the state during 2009 and concluded that the industry cost the commonwealth $22 million more than it received in taxes, fees and other revenue in return. Two tax breaks alone accounted for roughly $37 million in annual subsidies, and the study did not factor in the “legacy costs” associated with environmental and health damages.

The coal industry might be a net drain on the state’s taxpayers, but Virginia’s largest utilities and coal companies are significant political donors, contributing a combined $17 million to state legislators between 2004 and 2011. That financial support coincides with a state energy policy that bolsters fossil fuels and creates legal hurdles for renewables, according to an October 2012 report by Chesapeake Climate Action Network, the Sierra Club and Appalachian Voices, the organization that publishes The Appalachian Voice.

One such example is the 2007 law that set new regulations for big power companies, making it far more profitable for utilities to construct new plants that burn fossil fuels than to invest in energy efficiency or renewables. 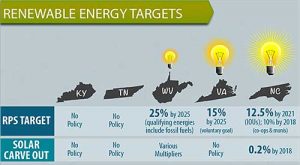 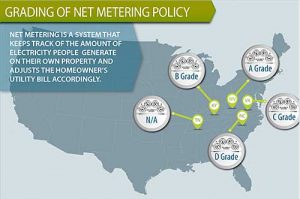 The law also established a renewable energy standard, a policy tool used in 29 states to mandate that utilities generate a certain amount of power from renewable sources. Unlike neighboring Maryland, however, which will require 20 percent of the state’s energy to come from renewable sources by 2022, Virginia’s voluntary goal for 15 percent renewable energy by 2025 relies on a looser definition of what sorts of energy qualify.

Under the renewables standard, it was once extremely profitable for Virginia utilities to purchase clean energy. Those financial incentives were eliminated in 2013, after Dominion Virginia Power spent an estimated $2 million on out-of-state renewables and gained $76 million in incentive payments.

“Virginia is a very difficult state to work in, but it’s not for lack of sunshine or public interest, but because of policy roadblocks and fairly ingrained ways of doing things that are generally slow to change,” says Tony Smith, CEO of Secure Futures, LLC, a commercial-scale solar enterprise in Staunton, Va. “You could call Virginia either the dark state or the birthplace for new ideas on solar.”

For Smith, it’s the latter. In 2010, Secure Futures completed a solar power system at Eastern Mennonite University in Harrisonburg, Va. It was the state’s first commercial solar project, and was financed through a power purchase agreement, where an outside party — in this case, Secure Futures — owns, operates and maintains an energy system such as photovoltaic panels and sells the electricity to a customer who hosts the system on their property.

When the company set up a similar system at Washington and Lee University in Lexington, Va., however, they faced a lawsuit from the state’s largest utility, Dominion Virginia Power, who said the agreement between the university and company infringed on its territory. Secure Futures avoided confrontation by changing the terms of the agreement, but the ordeal spurred them to push for legislative change. After two years, a bill passed this spring that establishes several two-year pilot programs that will let third parties like Secure Futures set up similar renewable energy agreements in Dominion’s territory.

“It’s kind of like an awkward first date,” Smith says of Dominion’s new programs. Smith is concerned that the pilot program, with its ample restrictions and relatively weak incentives for homeowners and businesses, is designed to abolish other, more consumer-friendly models. Still, he says, the programs are a sign of progress in a state where tight relationships between utilities, legislators and government regulators create a policy environment resistant to change.

Virginia’s renewable portfolio standard might be voluntary, but it’s a stronger legislative commitment than in Tennessee or Kentucky, neither of which have set a renewable energy goal.

In Kentucky, Carrie Ray of the Mountain Association for Community Economic Development and Kentucky Sustainable Energy Alliance sees the proposed Clean Energy Opportunity Act as a gold standard: the bill would require utilities to obtain 12.5 percent of their energy from renewable sources in 20 years while reducing electricity usage by ten percent through efficiency.

Other bills approach energy reform in more piecemeal fashion. One measure would raise the amount of electricity consumers can sell back to the grid from 30 kilowatts to two megawatts, giving larger businesses an incentive to generate their own power.

Outside of the legislature, however, power providers and supporters of clean energy are working together. As part of a settlement resulting from a dispute between public interest groups and the Eastern Kentucky Power Cooperative about a proposed coal-fired power plant, the groups are collaborating on ways for EKPC to expand their renewable energy offerings, currently limited to landfill gas, to include wind, solar, and low-impact hydroelectricity. The partners also recommend strengthening energy efficiency options and building a pilot project solar farm.

Like Kentucky, Tennessee lacks a renewable portfolio standard, but it hosts more jobs in the solar industry than its Appalachian neighbors.

Warren Nevad, president of the Tennessee Renewable Energy & Economic Development Council, attributes this to simple economic sense. TREEDC is a network of 92 mayors, more than 30 colleges and universities, and several state agencies aimed at boosting the state’s economy through renewable energy. Instead of outright advocacy for policy change, Nevad says, the organization facilitates conversations between stakeholders that expedite new projects.

He cites the City of Franklin, which developed a 200-kilowatt solar facility at its wastewater treatment plant. Since the city shared its experience at the TREEDC forum, several cities that attended have started similar projects. “What we’ve observed in renewable energy is that a lot of times folks don’t want to be the first to jump in the pool,” Nevad says. “We try to get one to jump in pool so that others will jump in.”

As the Southeast’s only state with a binding renewable energy portfolio standard, North Carolina jumped into the pool with a 2007 law requiring that utilities obtain 12.5 percent of their electricity from solar-electric and solar-thermal, wind, biomass and other renewable sources. Between 2007 and 2012, the Tarheel State generated or saved more than 8.2 million megawatt-hours of energy through a combination of renewable energy and energy efficiency projects, and spurred $1.4 billion in renewable energy investments, according to a report prepared for the North Carolina Sustainable Energy Association.

This year, however, several legislators attempted to repeal the state’s renewable energy standard and failed. The push was part of nationwide effort by the American Legislative Exchange Council, an alliance of conservative businesses and legislators, to repeal similar laws around the country.

Lowell Sachs of the North Carolina Sustainable Energy Association attributes the law’s endurance to the success stories legislators heard from residents, businesses and investors who have benefited from the clean energy policy. This summer a report from Environmental Entrepreneurs, a group of green-minded business leaders, found that during the first quarter of 2013 North Carolina ranked fourth in the nation in the creation of new clean energy and transportation projects.

Overall, clean energy fared relatively well during North Carolina’s tumultuous legislative session, Sachs says, but simply being caught up in the debate is harmful for the renewable energy industry. He wants to see a stable business environment and says it’s probably too soon to declare victory.

“Those bad ideas and uncertain motivations are still out there,” he says. “We need to continue the task of educating the public and the legislators so they have a better idea of what clean energy brings to the state and the state’s economy. More information is always good for clean energy.”