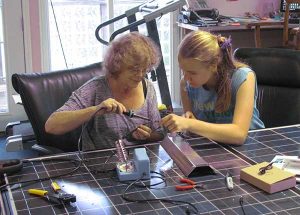 The sun is beating down on a mid-July afternoon in Philippi, W.Va., but that doesn’t stop Ruston Seaman and the youth mentoring group from playing ultimate frisbee. Their shouts — “Take your time!” and “Go left! Go left!” — echo throughout the community.

When they finish, Seaman jumps into his old red truck. He’s drenched in sweat, but drives up to his co-worker John Prusa’s house, which holds the clean energy arsenal that defines New Vision Renewable Energy’s work.

New Vision is a faith-based community development group that uses renewable energy, particularly solar, to “help people help themselves,” as they say on their website. It is part of a larger “creation care” movement among faith groups whose spiritual motivation as Earth’s stewards leads them to tackle environmental problems.

The movement is simultaneously far-reaching and localized. In one example, the faith-based investment entity United Church Funds collaborated with the United Church of Christ on a resolution to divest their denominations from fossil fuels in response to climate change, while nationwide nonprofit organization Interfaith Power & Light promotes energy efficiency and renewable energy around the country. And West Virginia’s Christians for the Mountains pushes for the end of mountaintop removal coal mining.

New Vision is the product of Seaman and Prusa, who serve respectively as president and director of technology and innovation. Both landed in Philippi more than 30 years ago, Seaman hitchhiking from the Black Hills and Prusa escaping from communist Czechoslovakia.

“You either believe in circumstance, accidents or providence,” says Seaman. “We believe it was providence.”

Prusa is an electrical engineer by training, and his “mad scientist” tendencies are what make New Vision bloom. Initially using B-grade materials such as old shower doors and miscolored solar cells, he was able to make functional solar panels for home use. Now New Vision relies on corporate partnerships for donations.

Using a do-it-yourself mentality, New Vision offers workshops that are open to anyone seeking instruction on solar technology and installation, among other renewable energy trainings.

Through this instruction, installations and other community events, the workshop attendees are able to build up “time credits,” which emphasize working “where you’re equal with everyone else,” says Seaman. Each hour of work in the community earns the member a time credit and moves them closer to a solar panel, which can also be financed through loans from New Vision.

Jude McConnell, a community member who has known Seaman for more than 30 years, says that he is soon going to have 20 panels installed on his home. “It’ll produce all the electricity I’ll use,” he says. 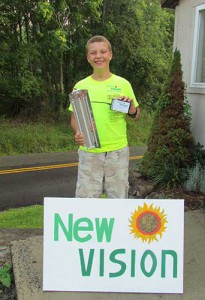 Between the time credits and makeshift renewable inventions, the cost of solar arrays for workshop attendees is lowered to a fraction of the normal market-based price. And that benefit doesn’t include the emotional investment of the members.

“It becomes like a quilting bee, making the solar panels,” Seaman says. “People came back because they were making friends.”

Using the method of co-production, New Vision has made approximately 180 solar panels. They have installed the panels on a number of houses, but their very first installation on the People’s Chapel remains an important point of visibility for renewable energy in Philippi.

The church stands on top of a hill, on the side of the road, with 32 panels atop its roof. “Nobody has told us we’re wrong yet,” says Seaman, “but we think it’s the first church on the planet Earth ever to teach its own people how to make their own energy from scratch.” Seaman is also the pastor of the People’s Chapel, which he says gets about 60 percent of its energy from the panels, which were installed two years ago.

Seaman and New Vision are aiming for the People’s Chapel to be one of the first net-zero churches. It’s part of his larger hope to shift the energy consumers of Appalachia and the nation into energy producers.

“The only answer to overcome dependency is productivity,” Seaman says. “People doing things for themselves is very important.”

Self-sufficiency, though, does have its roadblocks. One of them has been the utility companies, which have no vested interest in helping residents turn away from grid power to solar. Another has been a lack of cost-effective parts for their projects. Multinational corporation 3M generously donated enough reflective paper for the group to make 44,000 solar lights for international communities, but New Vision is still seeking more corporate partners. 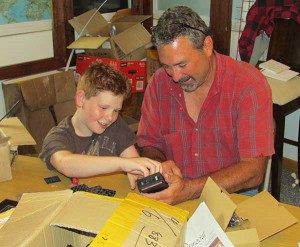 New Vision teaches residents how to create clean energy solutions. “We try and find things that people can do for themselves and do them together,” says Ruston Seaman, president of New Vision. Photo by Lauren Norris

On Chestnut Ridge, where the People’s Chapel is located, Seaman gathers every Monday evening with the youth mentoring group and others for a renewable energy workshop. The project at hand varies, but tonight he and everyone else will try to make about 300 solar-powered LED lights for a shipment to Africa.

The lights are powered by a 10-watt solar panel, and the LED lighting strips are made from old cut-up political signs. “You can have an Obama light, you can have a Romney light,” jokes Seaman.

Everyone works around the tables. New Vision, in partnership with Leadership Foundations, is part of a national youth mentoring grant from the Department of Justice that involves 13 sites in 12 states. Thomas Villors, a teenager, says that he learned how to solder wires for the solar panels last week, and a college student named Jaron Hulme says his month helping at the workshops has taught him plenty.

“I never thought that I would be capable of making [a solar-powered light] myself,” he says. “I thought it was a lot more complicated than it is to make a light.”

It’s not that complicated at all, as New Vision hopes to prove. It just takes a little time, work and faith.