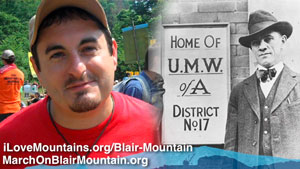 C. Belmont Keeney, or Chuck as most people know him, has a Ph.D. in Appalachian and American History from West Virginia University. His great grandfather, Frank Keeney, was president of the United Mine Workers of America and helped organized the Miners March in 1921. Chuck was one of the principle organizers of the June 2011 March on Blair Mountain.

Since Chuck is an active board member of Friends of Blair Mountain, we asked him to summarize last month’s march and tell us what’s next for Blair Mountain:

Two weeks after the June 2011 March on Blair Mountain, I accompanied Brandon Nida, a doctoral candidate in archeology at U.C. Berkeley and a good friend, on a day long trip back to the community of Blair. It was a Sunday, overcast and rainy, unlike the sunny mid-ninety degree temperatures under which we marched a couple of weeks before. Everyone who marched remembers the heat. But on this day, Brandon and I drove a nice, air conditioned car down 119 South to Six Mile Road and then winded down the curvy Route 17 through the mountains and into Logan County. To be honest, it is difficult to describe what I felt as we drove by so many familiar sights along portions of the March route. We passed by a lovely country home where, during the March, an old lady invited us to stop and eat lunch. As it turned out, this lady was the granddaughter of a woman who fed the miners during the 1921 March and we found ourselves resting under the shade of the very trees where rebellious miners had been ninety years before. We passed by homes where people applauded us and homes where people reviled us. I have lived my entire life in West Virginia, spent years studying the history of Appalachia, and yet I think I only truly saw my home for the first time from June 6-11, 2011 when hundreds of activists and concerned citizens marched the fifty miles from Marmet to Blair Mountain, West Virginia.

The story of the March itself is different for everyone who participated in it. Much has already been written about it as the people begin to tell their stories. No doubt, much more will be written, and I look forward to seeing what tales emerge from this memorable event. For myself, suffice it for the moment to say, I met many incredible people, formed friendships, and renewed some old ones, which have changed my life in ways I never would have anticipated before. I have met union miners, proud mountaineers, environmentalists, lawyers, scholars, and even people who believed so greatly in the justice of our cause that they crossed oceans in order to make their voices heard. To say that the march has been inspiring is an understatement. But in spite of the profound experience of the march and the attention that we have received around the nation and even the world, Blair Mountain is still in danger and we still have to save it. So as I drove from Charleston to Blair with Brandon and revisited so many places burned into my memory, one overarching question emerged:

What do we do now?

In the few weeks since Brandon and I returned to Blair much has transpired. The West Virginia Department of Environmental Protection has denied a petition submitted by the Friends of Blair Mountain, Sierra Club, WV Labor History Association, and other groups in an attempt to save the battlefield. In an official letter, the WVDEP called the petition "frivolous." There is also an ongoing federal lawsuit in which a number of groups are trying to return Blair Mountain to the National Register of Historic Places in order to protect the site. As of July 26, 2011, lawyers representing the WV Coal Association have asked the judge to dismiss the case. According to the company lawyers, citizens, "have no right to visit or enjoy the Blair Mountain nomination area."

And coal company lawyers have not stopped there. In a mountaintop removal study published this summer at West Virginia University, Dr. Michael Hendryx maintains that it is safer for a pregnant woman to smoke cigarettes than it is for her to live in close proximity to a mountaintop removal site. Birth defects and cancer rates are astronomically higher than the national average in these areas. How did the coal companies respond? Their lawyers issued a statement claiming that the WVU study failed to account for incest in mountain communities. Yes, you read correctly. According to the coal companies, hillbilly incest causes the health problems around mountaintop removal sites. It never ceases to amaze me. In 1921, the coal companies twisted the term "redneck" around and portrayed the miners as backward, uncivilized savages – using mountain stereotypes to mask their crimes and perpetuate their control over Appalachia. Ninety years later they are still doing the same thing, using stereotypes and degrading the culture of Appalachia in order to deflect the blame of reckless company policies onto the people who suffer from them. As we marched through the community of Sharples in the first week of June and I saw all the people screaming at us, it turned my insides into knots knowing that some of my fellow mountaineers vehemently defend the very companies who publicly refer to them as inbred. Something has to change.

Fortunately, we have no intention of giving up. The Friends of Blair Mountain and other groups are committed to the preservation of the battlefield and the mountain itself. Meetings have been held, steps are being taken, and new strategies are being devised. As I have stated to numerous reporters over the last few months, if we cannot save this mountain, we cannot save any mountain. I still believe it today. If you wish to know how you can help, go to our website at https://friendsofblairmountain.org. You can sign the online petition (we have over 25,000 signatures so far) and donate your time, money, or effort in a number of different ways. If you wish to become more informed on this year’s March on Blair Mountain: Appalachia is Rising event, watch the CNN documentary "The Battle for Blair Mountain: A Soledad O’Brien Report" which will air on Sunday, August 14 at 8 pm. The documentary will be rerun on Saturday, August 20. I encourage everyone to watch and get involved.

I have saved the most exciting news for last. We have leased property and a building within two miles of the Blair Mountain Battlefield and we are pleased to announce that we will be opening the Blair Mountain Museum and Community Center by the end of the summer. This property will be utilized for history tours, exhibit displays, historical plays, film screenings, live music, and the eventual compilation of the most comprehensive coal research archive in the United States. The Museum and Community Center will also be a place to hold local events, allow kids and other locals to shoot a little basketball, play some horseshoe, attend a local workshop on photography or local flora and fauna, or just relax and have a cup of coffee with our staff. This new facility offers us a chance to begin the revitalization of the coalfields both culturally and economically. We have a long way to go and we will need many volunteers so visit our website in the coming weeks and find out how you can be a part of this very exciting effort.

Since the March I have spent a great deal of time in reflection. Personally, I think that the March on Blair Mountain was about much more than simply saving a battlefield, preventing the destructiveness of mountaintop removal, and the suppression of union rights. We are not just trying to stop something; we are trying to build something. The cornerstone of this effort, I think, will be at the Blair Mountain Museum and Community Center. We cannot wait for the coal companies and the politicians to move our society forward, unless of course, we are willing to let our patience take us to the grave.. We must depend on ourselves and build a better future for Appalachia and America. I believe the journey begins at Blair and I hope that many of you will come and join us. Montani Semper Liberi!

A lover of Appalachia, renewable energy, local green sustainable economies, and energy efficiency, Jeff is the information technology consultant for Appalachian Voices and also the Senior Project Manager for the Appalachian Institute for Renewable Energy.