Fighting for Black Lung Benefits for Miners and Families

The Story of Kathryn and Mike South 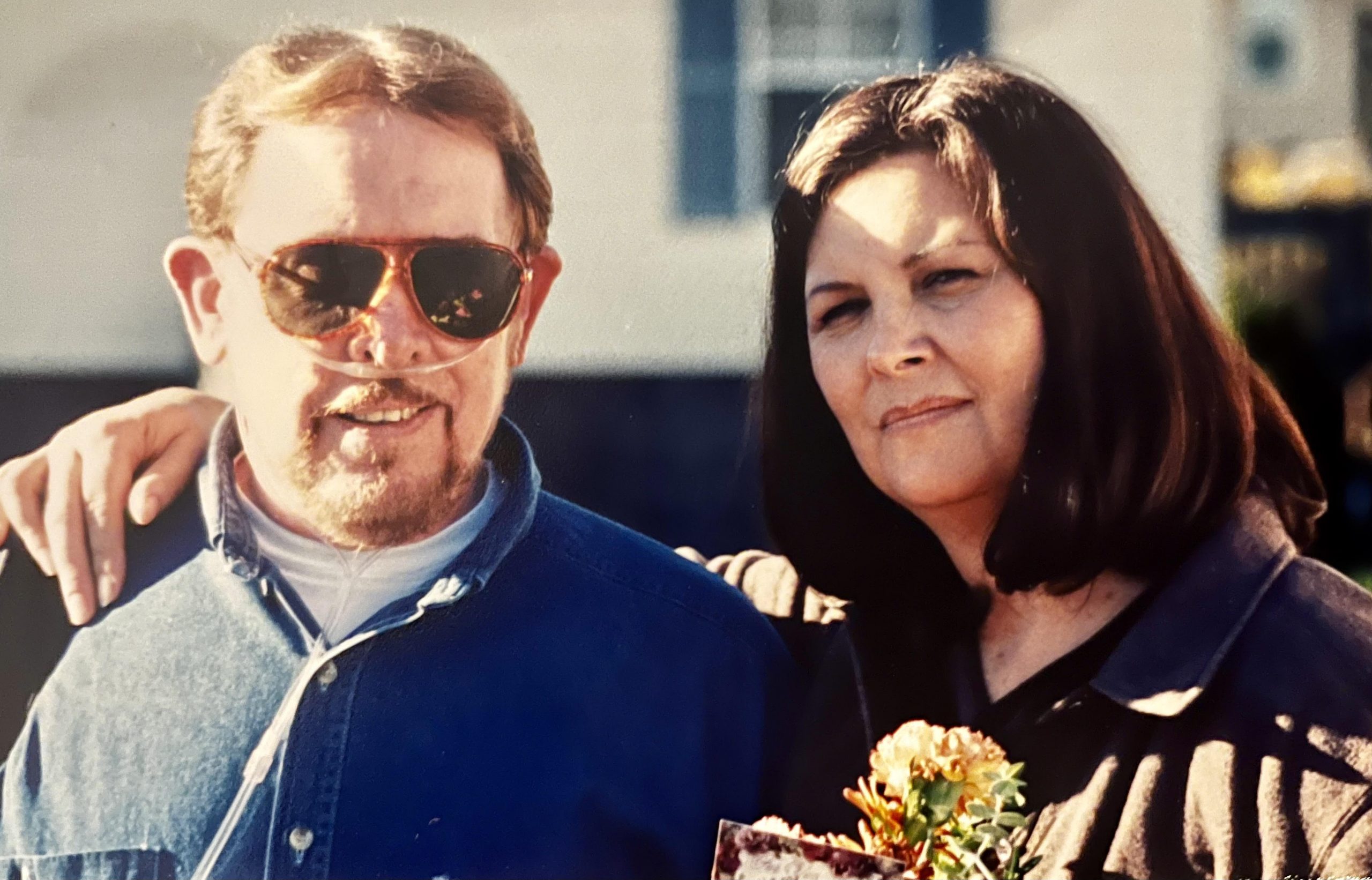 Former president of the Black Lung Association Mike South with his wife Kathryn South in 1998. Photo courtesy of the South family.

When Kathryn South’s husband, Mike South, was 35, his doctor told him that he could no longer work at Armco Steel’s Semet-Solvay mine where he had spent over 11 years as a carpenter. Mike, like generations of mine workers before him, had contracted black lung disease. Kathryn knew right away what this meant for her.

“He knew he was not gonna be around to support the family, so I knew I had to have a way of keeping myself going,” she says.

The next several decades of her life would be occupied by the arduous legal process to obtain federal black lung benefits, both before and after Mike’s death in 2001.

As Mike’s medical expenses and legal fees began to pile up, Kathryn faced a mountain of debt.

“I had no assets that would even cover anywhere near that amount of money,” she says.

Black lung benefits cover medical expenses and a modest living stipend when a miner is disabled by the progressive and deadly disease. The process that a miner or his or her dependents must navigate when they file for black lung benefits is expensive, time-consuming and complicated. Historically, the process has shielded many coal companies from responsibility for the health and safety of their workers. Kathryn has fought through this benefits process, and her story illustrates some of the problems embedded in the system.

Kathryn was born into a coal mining family in Logan County, West Virginia, in 1948. Her father worked at the Holden 22 mine until 1960, when a fire took the lives of 18 miners. In a random and fortunate twist of fate, her father was not present at the time of the fire.

“If he had gone to work that morning when he was supposed to, he would have been inside that mine when it caught on fire and he may not have survived,” Kathryn says.

After the disaster, Kathryn’s father was out of work for about nine months before moving the family, including nine children, to Fayette County, where he found work in the Semet-Solvay mine.

Another brother born after the move to Fayette County made Kathryn the eldest of 10. Kathryn half-jokingly describes the family as, “kinda like the Waltons, I guess, but less peaceful. We were more of a fighting group.” Her mother stayed home to care for the children, and her dad raised a vegetable garden between shifts at the mine. Even in a big family living on the modest salary of a miner, she didn’t feel the family’s poverty at the time.

“Most people, if they were poor, they didn’t really realize it at the time because everybody else was more or less in the same boat,” she says. 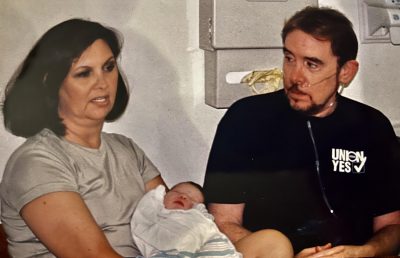 Kathryn met her husband, Mike, at Montgomery High School where they rode the bus together. The pair didn’t start dating until after high school, when Mike entered military service.

“He just came by the house one day and sort of asked me out,” Kathryn remembers.

After their wedding in 1969, the couple moved to Indiana, where Mike worked making trailer parts, but they soon decided to come back to Fayette County, where Kathryn’s dad helped Mike get a job in the Semet-Solvay mine. The couple had two daughters, Dusty and Nikki. While Mike worked, Kathryn stayed at home to care for the children, following the example of her own parents.

A Miner and an Artist

“[Mike] had a talent of being able to draw and paint,” Kathryn says.

He had an innate talent for art that he cultivated throughout his life, with no formal training. At one point, he had painted a portrait of the principal of a local school. As an expression of gratitude, the principal gave him an art kit, and his self-taught artistic journey was underway. 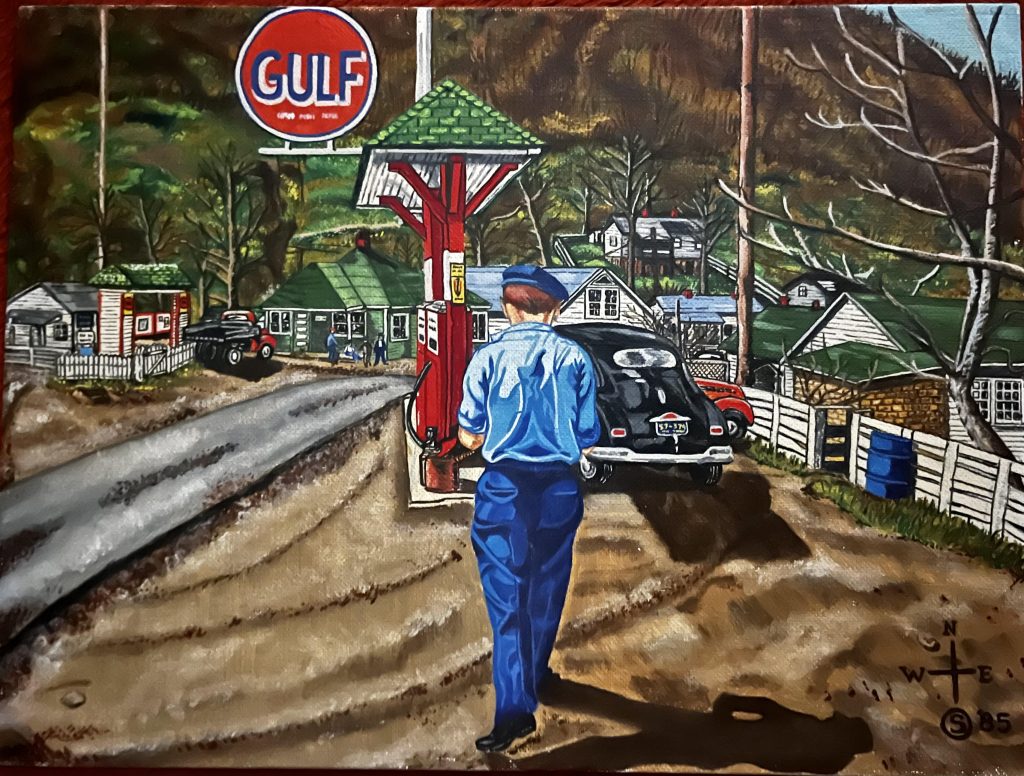 When he presented a portrait of the president of Armco Steel, his foreman liked the piece so much that he commissioned Mike to make a number of other paintings for the company.

“Every day that he went to work, instead of doing the carpentry force things he would normally do, he would work on doing these paintings,” Kathryn says.

“He kept that up until the day he died,” she adds.

Tenacity in the Face of Black Lung

After Mike finished the paintings and went back to his regular mining work, he started having breathing problems.

“They referred him to a lung specialist, so he went to see Dr. Rasmussen in Beckley,” Kathryn says.

Rasmussen was – and to some degree remains, even many years after his passing – famous in the region for his extensive work with the black lung movement. Kathryn recalls Rasmussen telling Mike that he “would never live to see his children grown,” if he didn’t come out of the mines. After fewer than 12 years on the job, Mike had been diagnosed with black lung disease.

Because of the size and severity of the scarring on his lungs, Mike could no longer do manual work, and the reality of his prognosis took a toll on his mental health. 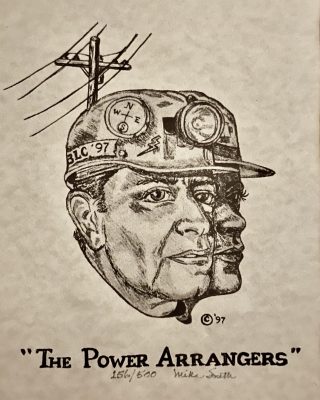 “The Power of Arrangers” drawing by Mike South representing coal miners working side by side for a common goal.

“I’m sure everybody [with black lung] goes through depression and a thought of uselessness,” Kathryn says. “They are lost for a while.”


The disease also affected his ability to make art. Kathryn recalls that, “he even had to change from oils to charcoal drawings because the oils had an odor” that irritated his breathing.

Unable to work, Mike threw himself into activism and community organizing with and on behalf of other miners impacted by the disease. He became the president of the Fayette County chapter of the Black Lung Association, and the National Black Lung Association, and traveled to Washington, D.C., several times, “trying to make everyone aware that black lung is rampant in the coal industry, and that [miners] are kind of like forgotten people,” as Kathryn puts it.

Mike enjoyed “having something to provide to make a difference,” she says. “It was his calling in life.”

On his trips to Washington, Mike made a big impact on legislators.

To bring in some badly needed income while the couple fought for Mike’s benefits, Kathryn began cleaning houses and working at her brother’s pizza restaurant. Meanwhile, Mike signed up for social security benefits, but the wait for compensation was long.

Kathryn also enrolled in classes at Virginia Tech.
“He was not gonna be around to support the family, so I knew I had to have a way of keeping myself going,” she says.

After earning a degree in health service administration, Kathryn got a job at Southern Appalachian Labor School, an organization in Beckley, West Virginia, focused on improving the lives of working-class Appalachian people.

Read about two current bills in Congress that would support miners with black lung and their families.

“I worked a lot with young people that have been thrown away by society, and we sort of gave them a second chance to get back the self-esteem they may have lost,” Kathryn says of her time at the labor school.

On July 19, 2001, Mike passed away in the University of Pittsburgh Medical Center’s Intensive Care Unit. He had gone through a failed lung transplant, and he had endured radiation treatment based on a misdiagnosis of cancer. Black Lung Association members from throughout the region attended his funeral, where they paid their respects beneath one of Mike’s original paintings, a depiction of Jesus being baptized by John the Baptist. 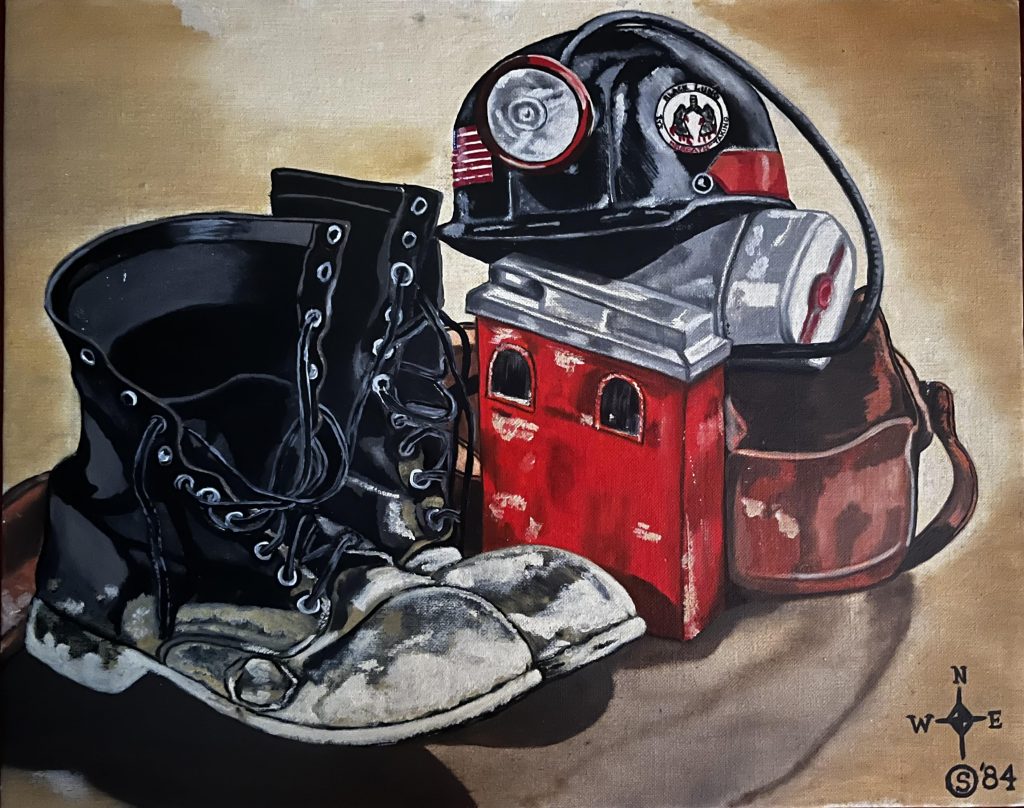 A portion of the equipment coal miners must wear daily is shown in the painting “Gear” by Mike South.

During the time that Mike spent at the hospital in Pittsburgh, Kathryn kept up her work with the Southern Appalachian Labor School remotely, staying on the phone and periodically traveling to conferences. After his death, she was able to stay at her job and maintain her income, but Mike’s medical services left her with an unthinkable financial burden.

“I was getting bills from pharmacies in Pittsburgh,” Kathryn says, “and one of them was for $400,000 and some dollars. And that was just one bill!”

For a while, Kathryn struggled to find someone who would take her case. In her view, this was because many attorneys were convinced that they would never earn much money on black lung claims. Eventually, her case was taken up by attorney Mary Natkin and her team of law students at Washington and Lee University’s free black lung legal clinic in Lexington, Virginia.

With the support of Natkin, her team, and the doctors who had diagnosed and treated Mike, along with “two huge notebooks of medical evidence,” Kathryn was able to prove her claim, and the administrative law judge granted her widow’s benefits, paid out by Armco Steel. The $400,000 pharmacy bill vanished, and took the prospect of personal financial ruin along with it.

Stories that Need to be Shared

Kathryn wants her story to be told.

“There need to be a lot more stories on the news, everywhere, and actually show people and widows in the mining industries because that’s an industry that is drying up,” she says.

Learn more and ask your legislators to support the bill!

As miners contract black lung at increasingly younger ages, it’s clear that the disease is not going away. Noticing the older age of a lot of people involved in the black lung movement, Kathryn calls on younger miners to join the struggle.

“A lot of people think, ‘Well, that’s never going to happen to me,’” Kathryn explains, but her husband’s case proved that younger miners need to be protected as well.

Kathryn criticizes the lack of regional investment in Appalachian people that the coal companies and their distant stockholders display, explaining how these companies “don’t know how [the workers] live or how they survive, or barely survive.” 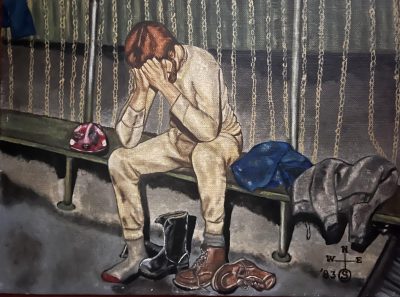 “Laid Off,” a painting by Mike South, depicts a coal miner who has just been let go.

But she applauds women in the mining community who are showing up in the black lung fight.

“Miners have always had to fight for every little thing they ever got, and it seems like there’s more women stepping up,” Kathryn says.

In National Black Lung Association chapters and advocacy organizations, “women are sort of taking the place of their husbands in those positions because their husbands have passed away.”

Remembering her own mother, who worked as a welder for the war effort during World War II, Kathryn recalls a tradition of working women allied with their husbands.

“I think women have kind of always been there in every situation.”

Willie Dodson contributed to this article.