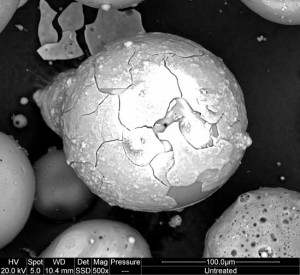 Lisenby, Tuberty and Babyak were among the first to release independent testing results after the disaster occurred (see our coverage in the Feb/March issue, available online at www.appalachianvoices.org). The data they obtained from their initial samples showed much higher levels of a number of toxic heavy metals than the data being released by TVA, leading them to request permits for further testing and partner with the Tennessee Aquarium for sample collection.

Their second round of testing was much more extensive, and included water sampling at seven sites, sediment collection, and tissue sampling of collected fish. The sample analysis indicates that the effects of the ash spill on water quality and aquatic ecosystems are serious and will probably continue to grow.

Second, electron scanning microscope images of the cenospheres (pictured above)–floating coal ash particles, which TVA has insisted are “harmless”–show a layer of what the report calls “secondary mineralization gel coating” encasing the particle; this hardened outer layer contains arsenic levels equivalent to 20,000 to 30,000 parts per million.

Finally, in their analysis of fish tissue they found elevated levels of selenium, a dangerous heavy metal responsible for birth defects and stunted development in aquatic life. According to the report, “the aquatic life in the river may be on the threshold of a toxic event.” This result is especially striking, as the samples were taken before the full window for bio-accumulation (typically 30 days after introduction) had passed, meaning that as selenium levels in the water rise due to the massive introduction of coal fly ash, the river ecosystem may cross the toxic threshold and see much more drastic changes as the metal bio-accumulates up the food chain.

The effects on aquatic life were also apparent in the team’s harrowing observations from on the water. They found fishes’ gills clogged with ash, and upon dissection found that ash had clogged the entire digestive system. One specimen cited in the report had so much ash in its system that ash comprised 7.7 percent of its body weight.

Information from the report has already been used in testimony from Renee Hoyos of Tennessee Clean Water Network during the March 31 hearing on the issue in front of the U.S. House Water Resources subcommittee. The report proves the need for ongoing study of and attention to the impacts of the disastrous spill.