Since March 2017, Becky Ellis of Putnam County, W.Va., has regularly visited area waterways, sometimes scaling down a steep bank with the aid of ropes to document the condition of local streams. Ellis, like scores of similar volunteers, isn’t a scientist — she has a full-time job in land title work — but she has been trained to collect water quality data as part of a network of individuals and organizations working to ensure pipeline companies follow environmental rules.

Volunteers like Ellis carefully note stream conditions before pipeline construction and document any changes during and after. Environmental watchdog organizations use the evidence to alert authorities, which has led to both informal arrangements where companies fix their mistakes and state-issued violations against pipeline companies. 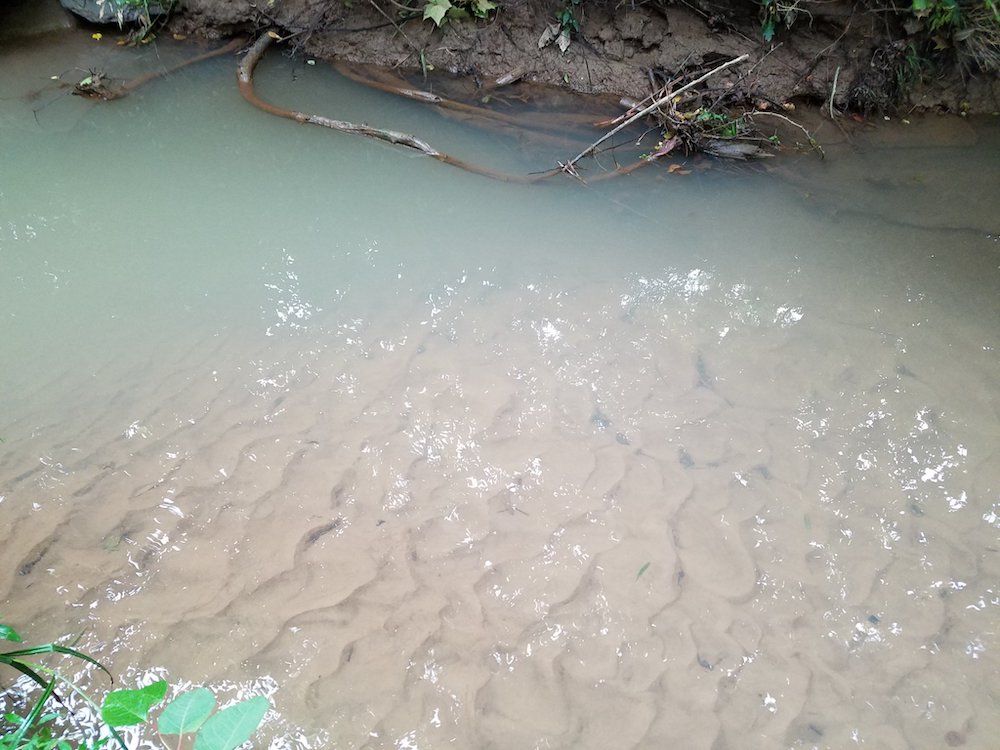 
Trainees learn to use conductivity meters, which can indicate the presence of dissolved solids in the water, and pH strips, which measure acidity. Fluctuations in conductivity and acidity can indicate the presence of toxins. If such changes are detected, program coordinators alert state regulators to conduct formal inspections. Monitors also learn to measure sedimentation and document visual changes, such as the amount of silt covering riverstones.

Ellis learned about the training through the West Virginia environmental group Ohio Valley Environmental Coalition, which has organized water monitoring volunteers across five of the state’s southwestern counties.

TransCanada Corporation’s 170-mile Mountaineer XPress pipeline follows the path of the SM-80, a pipeline built in the ‘50s and ‘60s and infamous for the 2012 explosion in Sissonville, W.Va., that destroyed three homes and damaged others.

OVEC Project Coordinator Robin Blakeman notes that while the MXP is officially terminating in Cabell County, the gas will then be sent to older SM-80 lines — a main reason the group decided to get engaged in water testing.

“They are replacing some segments of the old line through Cabell and Wayne counties, but not all of them,” Blakeman says. “So there will be some especially rural areas of those two counties that are going to be having higher pressure gas go through this old gas line.”

Get involved by participating in water monitoring or aerial surveillance along the pipeline routes. Pipeline CSI is also seeking volunteers to review aerial photos, which can be done remotely online. For links and resources, visit appvoices.org/pipeline-monitoring.

Teams of two have monitored many streams along the MXP route since 2016 to gather baseline data before construction. Ellis and her teammate monitor a stream near a four-lane highway that Mountaineer XPress developers are burrowing beneath. At one point, holding areas for excess water changed the area’s drainage system, damaging a local farm. Ellis and the landowner reported the incident to OVEC and Trout Unlimited, who then contacted state regulators, who brought the problem to TransCanada’s attention. The company then repaired the area.

She feels like the the extra scrutiny also encourages contractors to follow the rules more than they otherwise would. “They know we’re watching,” Ellis says

Despite some frustrations — one site became impassable after trees fell, so Ellis is seeking access from another landowner — Ellis finds satisfaction in observing a creek, reporting problems and seeing them resolved.

“It’s rewarding, you feel like you’re doing what you can to help,” she says. West Virginia’s environmental regulators are also stretched thin — it can take weeks for an inspector to arrive after an incident is reported.

“[It’s] another reason that we knew we needed extra eyes and ears out there to see what’s going on,” Blakeman says.

OVEC reports citizen complaints to the state, but Blakeman explains that regulators are stretched thin. Inspectors might not arrive until weeks after an incident and often don’t issue violations. “Usually we find the inspector wants to just work it out with the contractor who’s doing the construction so that they do things better,” she says.

According to Blakeman, volunteers will continue to monitor for erosion and hillside slippage up to a year after the line is buried and operational. The June 2018 explosion in Moundsville, W.Va., on TransCanada’s new Leach XPress Pipeline, was attributed to a landslide.

“With the success that we’ve had in getting volunteers engaged in the stream testing program, we are now hoping and planning and plotting to do an air quality monitoring program pilot project starting early in 2019,” Blakeman says. 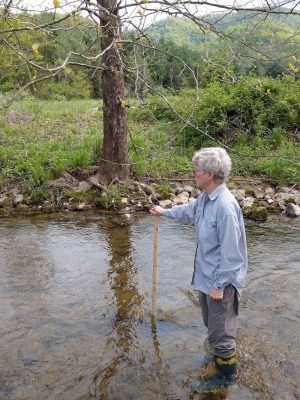 Construction along many sections of the Mountain Valley Pipeline in Virginia and West Virginia kept citizen water monitors busy in 2018. Among them is Elizabeth Struthers Malbon, a retired Virginia Tech religious studies professor who first learned about the pipeline when it was slated to cross her driveway.

The route shifted away from her home, but Malbon remained a staunch opponent and became involved in Preserve Montgomery County VA, a grassroots group that formed to fight the pipeline.

In April 2018, Malbon attended a water monitoring training organized by Appalachian Voices, the publisher of this newspaper, Trout Unlimited and West Virginia Rivers Coalition. Soon, Malbon was monitoring six sites as part of a team of eight.

Those sites include one on the North Fork of the Roanoke River that Trout Unlimited began monitoring more than a year before construction, providing evidence of stellar water clarity that, when muddied by rain, rebounded quickly.

Water clarity, also known as turbidity, indicates how much suspended material, like sediment, is in the water. Excess sediment has damaging effects on fish and other aquatic life, as well as humans. The data Malbon’s team collected in 2018 shows water turbidity upstream of construction followed the same pattern as the year before. But water quality downstream was consistently lower and did not fully recover after a storm.

“MVP has not met the requirement that all disturbed sediment be kept on the construction site,” reads a report Malbon prepared. It was filed with the Federal Energy Regulatory Commission in September as evidence of the company’s failure to follow FERC’s erosion and sedimentation requirements; copies were sent to the Virginia Department of Environmental Quality and the State Water Control Board, among others.

Malbon’s team also monitors a spring that provided drinking water to the property owners and two tenant households for generations. Monitors repeatedly documented clear water — but then the amount of turbidity increased dramatically.

The landowners were shocked, and dug two wells weeks later. The spring runs clear at times, but after a heavy rain sediment and other contaminants lodged in the porous karst topography can now flow into the spring.

“I don’t mind if we drink a little bit of dirt,” one of the owners told Malbon. But the couple was concerned about the chemicals in the lining of the pipeline potentially leaching into the water, as well as herbicides that MVP might spray to keep the right-of-way clear.

Serious water quality issues Malbon’s team identifies are submitted to Mountain Valley Watch, a project of the grassroots POWHR Coalition. In Virginia, Mountain Valley Watch conducts aerial surveillance and reviews citizen water quality reports to submit complaints to the relevant authorities, some of which have resulted in state-issued violations against the company. On Dec. 13, the Virginia State Water Control Board voted 4 to 3 to reconsider Mountain Valley’s state water permit.

“I feel like I’m trying to collect the cleanest data I can and write the clearest reports I can so that some lawyer will be able to call upon them someday,” Malbon says.

The Pipeline Compliance Surveillance Initiative, a project of Allegheny-Blue Ridge Alliance groups opposed to the Atlantic Coast Pipeline, monitors construction along the Atlantic Coast Pipeline’s route in West Virginia and is conducting baseline assessments along the proposed path in Virginia, where pipeline developers Dominion Energy and Duke Energy do not have permission to begin building.

In West Virginia, Pipeline CSI has found numerous problems through its combination of sophisticated mapping tools, water monitoring and aerial surveillance from drones and airplanes. The group has filed complaints with state regulators, some of which led to violations issued against pipeline developers.

On Dec. 6, Pipeline CSI filed an additional 18 complaints with West Virginia, including instances of runoff controls failing and construction occurring before controls were installed — common occurrences, according to project chair Rick Webb, a retired University of Virginia environmental scientist.

As of late November, federal rulings barred the Atlantic Coast and Mountain Valley pipelines from doing construction work in waterways. But an aerial image captured Nov. 21 from a Pipeline CSI plane showed crews boring beneath Dry Fork in Pocahontas County, W.Va. Concerned that developers were using a prohibited, environmentally risky method to circumvent the ban on crossing waterways, Pipeline CSI reported the situation to the state.

They learned that FERC had granted Atlantic Coast a variance allowing the developers to use the previously prohibited construction method.

“Dominion and the pipeline developers are quite adept at gaming the system and the agencies seem willing to play along with that,” says Webb. “So it’s very frustrating. It seems like if they can’t meet the requirements, then the requirements are waived.”

Longtime environmental advocate and aerial drone photographer Allen Johnson lives 600 feet from the pipeline route in Pocahontas County. A member of the local group Eight Rivers Council, Johnson’s monitoring along the pipeline’s intended path has led to one state-issued violation against the company so far.

By showing developers that the public is watching and capable of identifying improper construction methods, Johnson says they might do a better job.

In late fall, construction in Johnson’s area was already relatively quiet due to the federal stop-work orders, giving residents more time to prepare. And on Dec. 7, Dominion announced a voluntary halt to construction along the whole length of the pipeline in response to lawsuits that stripped pipeline operators of additional permits.

According to Johnson, about 20 people attended the most recent Eight Rivers Council meeting, and many expressed interest in joining the monitoring effort.

“I hope they still get shut down,” Johnson says. “But if [the pipeline] happens, we’ve got to be protecting our homeland.”

Editor’s Note: This article has been lengthened from the print version to include additional detail, including news developments following the Dec. 6 press date.

We asked Elizabeth Struthers Malbon with Preserve Montgomery County VA what she would say to people who were considering getting involved in monitoring pipeline construction.

On volunteering: “To anyone who wants to volunteer, you’re never on your own without support. … There are people willing to teach you, willing to work with you.”

“I didn’t have any skills in this area to start with, but I had transferable skills. It’s more about passion than about what your original skills were.

The other thing is you will meet some really great people — people that you might not have met before, that you wouldn’t have encountered in your normal, professional life, but you will be really glad you did meet them.

There isn’t any reason for anyone not to volunteer something, but it doesn’t all have to be the same thing. Some have more time than money, some have more money than time. But skills should not be a hindrance because once you inquire there will be something you are able to do. If a New Testament professor can become a water monitor and write turbidity reports, anything is possible.”

On donations: “One of the things that many, many people can give, not all, is money. People should not underestimate the value of money given to a good cause, because sometimes people who have high-power jobs don’t have much access to time, but maybe they have access to money — and that’s something that can be used to buy expertise. All the groups now have our legal fees, and we can’t all just jump up and be lawyers. I can be trained to monitor water, but I can’t be trained to practice law. So I would say, don’t underestimate the value of giving money. Not everyone has money that’s available, not everyone has time that’s available.”