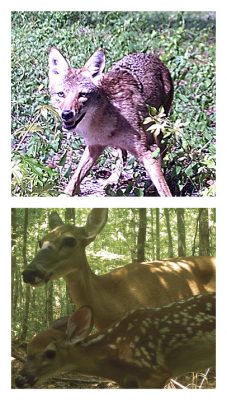 Cameras with the Candid Critters project in North Carolina took these images of a coyote and two deer. Photos courtesy of eMammal

Candid Critters, a North Carolina-based tracking study, equips volunteers to set up trail cameras in backyards or parks in the hopes of capturing elusive animals on video. The collected footage is then uploaded to eMammal, an online database for scientists and the public to browse.

“The main goals are to get some good data on these animals and compare across the state how common are they, what’s affecting their distribution,” says Roland Kays, project leader and head of the Biodiversity Research Lab at the Museum of Natural Sciences.

Information gleaned from the videos will be used for wildlife management and conservation in partnership with the North Carolina Wildlife Resources Commission.

The project will continue through 2019 and could be extended if funding is available.
Learn more and sign up online at nccandidcritters.org. — By Lorelei Goff

The Hunt for the Rusty Patched Bumble Bee 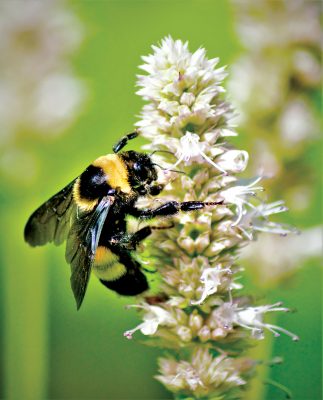 “It used to be really, really common,” Harris says. “We had 738 volunteer hours spent looking this year that provided 474 observations submitted to our project and we didn’t find one.”

According to Harris, five other bee species are at risk, two of which were identified among the 474 photographs submitted to the project. Volunteers can photograph the bees on flowers or capture them in jars and release them after taking the photos.

The project was spurred by the roughly 90 percent decline in the rusty patched bumble bee’s population across its range in parts of the East and Midwest. Harris plans to try again in 2019 in the hopes that one of these endangered bees will be located and the Southern Appalachians will be designated as critical habitat for the species.

The critical habitat designation would provide more protection for the lands that support the species, including lower pesticide use, minimal mowing of open areas and habitat maintenance.
Get involved at tinyurl.com/search-rusty-patched-bee. — By Lorelei Goff