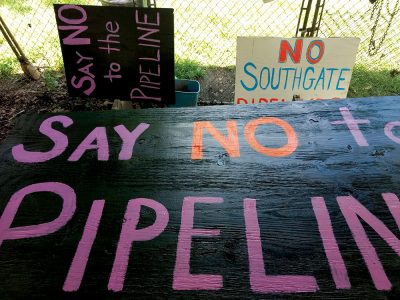 The project, known as MVP Southgate, would snake 73 miles from Pittsylvania County, Va., through North Carolina’s Rockingham and Alamance counties. While Mountain Valley can now seek permits from the state, it will likely face difficulty from the North Carolina Department of Environmental Quality.

On Nov. 5, the state agency sent a letter to FERC stating that many residents are “apprehensive of and sensitive to the possibility of another new pipeline” after last year’s approval of the Atlantic Coast Pipeline.

“We question whether the project satisfies the criteria for the Commission to deem it in the public interest, and whether it is essential to ensure future growth and prosperity for the residents of our State,” reads the state agency’s letter to FERC.

On Dec. 12, a coalition of environmental groups including the Center for Biological Diversity and Appalachian Voices, the publisher of this newspaper, filed a motion to intervene in FERC’s case on whether to approve the pipeline.

“This destructive pipeline would do immense harm to endangered species in North Carolina and Virginia as bulldozers clear a path through their habitat,” said Perrin de Jong, North Carolina staff attorney at the Center for Biological Diversity, in a press release. “MVP Southgate would also degrade air and water quality by accelerating fracking throughout West Virginia, Ohio and Pennsylvania.”

In September, Alamance County Commissioners unanimously passed a resolution opposing MVP Southgate. The resolution stated that stormwater and erosion control problems in Mountain Valley’s path in Virginia raised concern about Southgate’s impact on Alamance County’s riverfront terrain and other water bodies. The commission has no permitting authority over the pipeline.

The town council of Stoneville, N.C., narrowly passed a resolution against MVP Southgate on Oct. 2. Energy News Network reports that Stoneville citizens like Steven Pulliam are hoping to start a wave of action in Rockingham County.

“We’re really happy about it, this is the first in our county,” Pulliam told the publication. “I think this will set a chain of events off.”

MVP Southgate originally planned to build two high-powered compressor stations to pump gas through the pipeline, but reduced it to a single station in Pittsylvania County, Va. — By Kevin Ridder