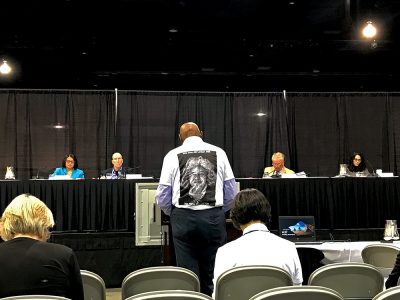 John Laury was one of several Union Hill residents who spoke before the Virginia Air Pollution Control Board on Nov. 8, 2018. Photo by Lara Mack

On Nov. 15, Virginia Gov. Ralph Northam replaced two members of the state’s Air Pollution Control Board less than a week after they offered critical comments and questions during a meeting to consider a compressor station for Dominion Energy’s proposed Atlantic Coast Pipeline.

The planned industrial facility, which would operate 24/7 to push fracked gas through the pipeline, would be located in the predominately African-American community of Union Hill in Buckingham County, Va. While the air board members’ term ended in June, Gov. Northam had allowed them to stay on, like the more than 200 other gubernatorial appointees whose terms are up.

On Dec. 19, the board voted to again delay a final vote on the permit, and opened a new public comment period to review new information submitted by the Virginia Department of Environmental Quality. Gov. Northam’s two new appointees did not attend the meeting. 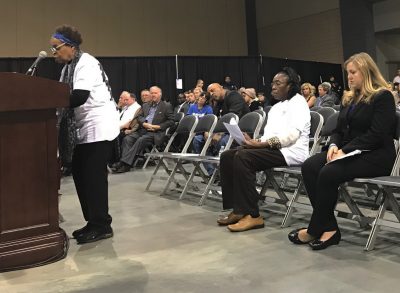 Residents of Union Hill have expressed concern in public comments and a public hearing regarding the facility’s air emissions, near-constant noise pollution and its impact on several nearby slave cemeteries. On Dec. 8, 100 Union Hill residents, state delegates and celebrities sent an open letter to the board describing “an undeniable pattern of dangerous, polluting industrial facilities being sited in poor communities of color across our nation.”

Gov. Northam also replaced two members of the State Water Control Board in November including Roberta Kellum, who attempted to pass a motion to revoke certificates for the Mountain Valley and Atlantic Coast pipelines. Robert Dunn, the other dismissed water board member, had voted in favor of pipeline permits. Environmental groups including Appalachian Voices, the publisher of this newspaper, were outraged by the governor’s action.

“Governor Northam has repeatedly promised that the Mountain Valley and Atlantic Coast pipelines would not be built unless they meet the strictest environmental standards,” said Appalachian Voices’ Virginia Program Manager Peter Anderson. “By removing three citizen board members who appeared to be holding the projects to those standards, the governor has undermined his own promise.”