Legal Action and Protests Against Pipelines 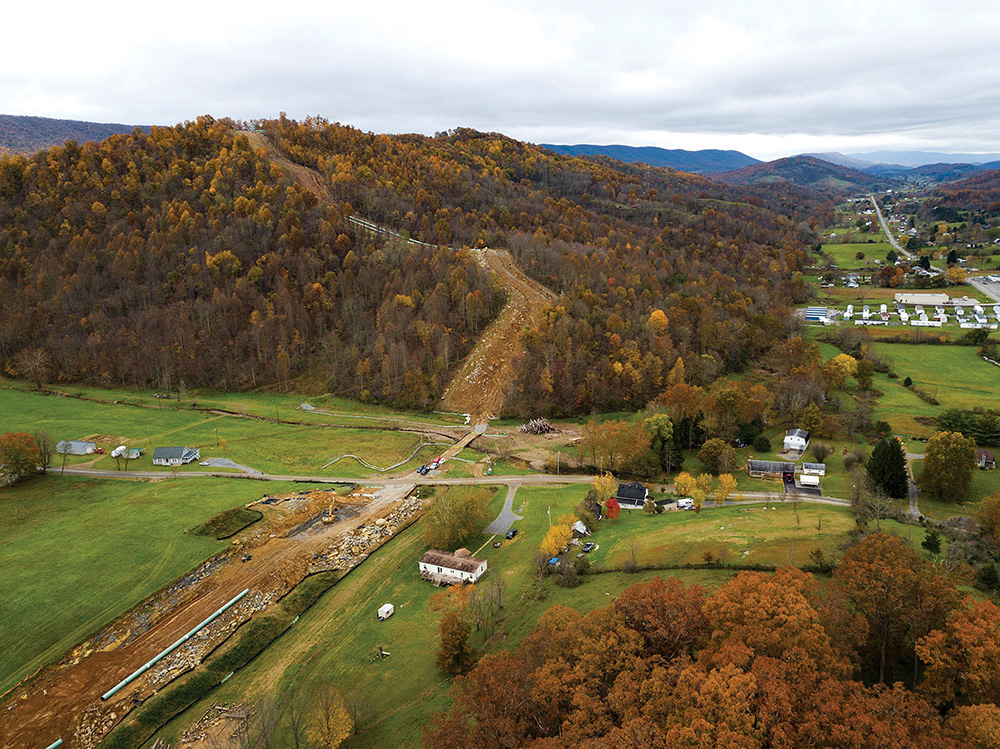 The Mountain Valley Pipeline cuts across a mountain in Monroe County, W.Va. Photo courtesy of Appalachians Against Pipelines

As winter settles over the mountains, construction on the Atlantic Coast Pipeline is halted altogether and work on the Mountain Valley pipeline is on hold in numerous locations, the result of multiple lawsuits.

Also on Dec. 13, the U.S. Fourth Circuit Court of Appeals struck down permits issued by the U.S. Forest Service that would have allowed Dominion Energy to build its proposed Atlantic Coast Pipeline across two national forests, the Appalachian Trail and the Blue Ridge Parkway.

In the court’s written opinion, judges wrote, “We trust the United States Forest Service to ‘speak for the trees, for the trees have no tongues,’” quoting “The Lorax” by Dr. Seuss.

“A thorough review of the record leads to the necessary conclusion that the Forest Service abdicated its responsibility to preserve national forest resources,” the ruling stated. “This conclusion is particularly informed by the Forest Service’s serious environmental concerns that were suddenly, and mysteriously, assuaged in time to meet a private pipeline company’s deadlines.”

On Dec. 7, the court suspended the U.S Fish and Wildlife Service’s revised permit which would have allowed Atlantic Coast Pipeline developers to burrow through the habitat of threatened and endangered species. Later that day, Dominion voluntarily suspended all construction along the pipeline’s 600-mile route.

According to the Richmond Times-Dispatch, Congress is considering amending the omnibus spending bill to allow federal agencies to circumvent the court and grant permission to Dominion to burrow under the Blue Ridge Parkway and the Appalachian Trail.

As of Dec. 18, pipeline resisters continued to delay construction at various points along Mountain Valley’s path, and both pipelines lacked necessary federal permits to do construction work in waterways in West Virginia, Virginia and North Carolina. Mountain Valley Pipeline developers expect to have the pipeline fully online by the end of 2019.

On Nov. 20, the U.S. Army Corps of Engineers suspended a key Clean Water Act permit for the entirety of the Atlantic Coast Pipeline. Without this permit, called Nationwide Permit 12, developers are prohibited from building through any of the 1,500-plus waterways and wetlands along the fracked-gas pipeline’s 600-mile route.

The permit suspension for the Atlantic Coast Pipeline follows an Oct. 2 order from the Fourth Circuit striking Mountain Valley’s Nationwide Permit 12. In its Nov. 27 opinion, the court explained that the Army Corps could not substitute its own condition in place of West Virginia’s requirement that all water crossings be completed within 72 hours. The court also held that the state could not change or waive its own 72-hour requirement without complying with public notice and comment procedures.

While Virginia and North Carolina don’t have that requirement, advocates persuaded the Army Corps to suspend its permits in those states unless and until a resolution is reached in West Virginia.

Dominion plans to have most of the Atlantic Coast Pipeline in service by 2019, and completed in 2020. In November, the company increased the cost estimate from $6.5 billion to $7 billion.

In Pennsylvania, Energy Transfer Partners plans to put their incomplete Mariner East 2 Pipeline into service by the end of 2018 by temporarily connecting finished portions of it with a pipeline built in the 1930s. That 70-plus-year-old pipeline has a history of leaks, according to StateImpact Pennsylvania, most recently in June when 33,000 gallons of gasoline seeped into a creek near Philadelphia.

“We have seen sinkholes created by the pipeline drilling, contaminated well water, and some subtle and not-so-subtle bullying of Chester County citizens by big corporate interests,” said Hogan in a press release announcing the investigation. “We expected the state regulators and the governor to step in and assure the safety of Pennsylvanians. They have not. So now the Chester County District Attorney’s Office will demand that every aspect of these pipelines be conducted safely, or we will bring into play all of the tools of the criminal justice system.”

Hogan added that the September explosion of Energy Transfer Partners’ Revolution Pipeline sparked his interest in opening the investigation and “changed speculation into tangible danger and destruction.”

On Dec. 12, Columbia Gas Transmission, LLC, asked the Federal Energy Regulatory Commission for approval to put most of their 165-mile Mountaineer XPress Pipeline into service before the end of 2018. If approved, Columbia would be able to transport fracked gas across nine West Virginia counties and activate a compressor station in Doddridge County, W.Va. State regulators fined Columbia $122,350 for 16 construction violations on Oct. 2, and required them to submit a plan of corrective action within 20 days.

West Virginia regulators are accepting public comment on the fine and violations until Dec. 23. 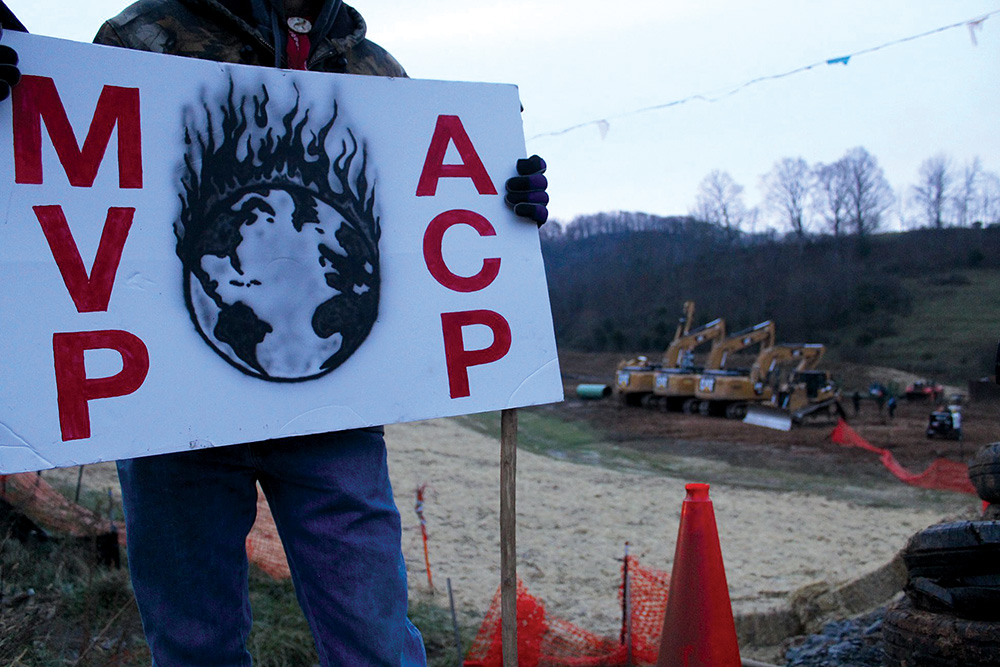 A sign supporting a Nov. 19 protest at an MVP worksite in Lindside, W.Va. Photo courtesy of Appalachians Against Pipelines

Protests have continued to spring up in Mountain Valley’s path. Six people were jailed after blocking traffic into a pipe yard near Beckley, W.Va., on Oct. 22. Appalachians Against Pipelines, a group that raises money to fund pipeline fighters’ legal fees, states that one of the resisters was in jail through Oct. 31. 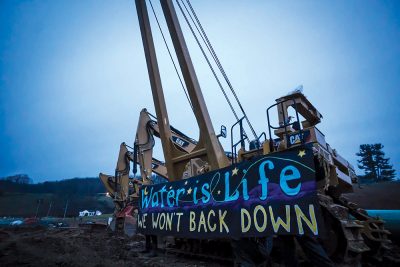 A protester climbed and hung banners from MVP equipment in Lindside, W.Va., on Nov. 19. Photo courtesy of Appalachians Against Pipelines

On Nov. 15, a Roanoke County, Va., judge dropped trespassing and other charges against Theresa “Red” Terry and her daughter Theresa Minor Terry. The pair gained national attention when they held tree-sits on their land in Mountain Valley’s path for more than a month in spring 2018.

According to Appalachians Against Pipelines, a Monroe County, W.Va., court dropped charges on Nov. 28 against Becky Crabtree, who blocked pipeline construction for several hours on July 31.

On Nov. 14, the tree-sitter known as Deckard — who occupied a stand on Peters Mountain and stopped Mountain Valley tree clearing for 95 days in early 2018 — was sentenced to 48 hours in jail, Appalachians Against Pipelines reports.

In Elliston, Va., a tree-sit that began Sept. 5 on Cletus and Beverly Bohon’s land in the path of the pipeline was ongoing in early December.