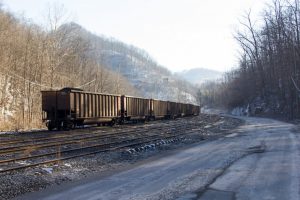 A train leads up to a Patriot Coal site in Kanawha County, W.Va. Photo by Foo Conner | Jekko.

What would a health care executive-turned-environmentalist want with the dying business of mining coal?

That’s the question some are asking after it was announced this week that Tom Clarke, a Virginia businessman, plans to acquire assets, and assume around $400 million in liabilities, from recently-bankrupt Patriot Coal through one of his companies, ERP Compliant Fuels.

The deal is part of an elaborate and untested business model that will allow ERP — an affiliate of the Virginia Conservation Legacy Fund — to continue mining Patriot permits in West Virginia, bundling this coal with “carbon offsets” accrued from planting trees, and selling these bundled products to electric utilities.

Because trees absorb atmospheric carbon, Clarke believes credits created through reforestation will help states meet carbon emissions targets set forth by the Obama administration’s Clean Power Plan. But the plan does not make clear that coal-carbon offsets will count towards states’ emissions targets.

According to The Roanoke Times, Clarke says he’s not in it for the money, but for the earth. But that isn’t clear from the available literature on ERP, which seeks to bring together a coalition of conflicting environmental and capital interests — “coal mining businesses, electric power producers, forestland owners, government, and the scientific community” — in order to reduce global CO2 emissions. In the same literature, Clarke and the ERP/VCLF tout their business partnership with Jim Justice, a notorious scofflaw mine operator who owes nearly $2 million in mine violation fines.

As if these relationships weren’t enough to raise suspicion, ERP/VCLF’s definition of a “carbon offset” is dubious. As The Roanoke Times points out:

It doesn’t matter that Clarke will target coal-fired electrical generating plants in the Ohio River Valley with his pitch, while the designated trees are in Central America and the U.S. South or would be planted in Appalachia. Carbon emissions spread in the atmosphere and the concentration evens out; a party that wants to offset its carbon output can fund tree planting or tree preservation anywhere and benefit the globe, he said.

If there’s no requirement that trees be planted on deforested land in Appalachia, what’s stopping ERP from destroying mountains and externalizing the costs onto Appalachian communities for the social mission of stopping climate change? How does ERP plan to address coal ash and mercury and the many other harmful externalities that are inflicted on communities as coal is mined, processed and burned? How will the company account for the numerous injuries, fatalities, and black lung incidences that result from both underground and surface mining? Coal’s impact goes far beyond CO2 pollution.

These are crucial questions to ask as the coal industry in central Appalachia undergoes massive structural changes. If the history of the coal industry in the region has taught us anything, it’s that we should be highly suspect of outside corporate interests looking to exploit the region’s natural resources.

This is just as true today, in an era in which investors and politicians stand to gain substantial material and social capital off of the region’s diversification.