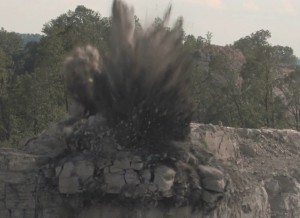 A recent study connects air pollution from mountaintop removal mines with health problems in nearby communities.

For generations, Appalachian mining communities have raised questions about local health problems, wondering whether or not they may be linked to air pollution from surrounding coal mines.

A recent study conducted by a group of West Virginia University researchers has confirmed that suspicion, reporting that potentially dangerous air pollution levels are more likely in areas surrounding mountaintop removal coal mines than in mine-free communities. This suggests a significant correlation between coal mining areas and rates of cardiovascular disease, birth defects and cancer.

Published last week in the Journal of Exposure Science and Environmental Epidemiology, the paper is the latest of more than 20 peer-reviewed studies dating back to 1991 examining the health impacts of mountaintop removal in Appalachia.

Explosives used during the mountaintop removal mining process are one of the suggested causes of increased particulate matter, a type of air pollution made up of very tiny particles that can easily be inhaled and become lodged in the lungs. With large blasts of rock and vegetation, mountaintop removal sends these particles into the air, where they are carried far beyond the site of the explosion and into surrounding communities. Previous studies have proven that contact with excess particulate matter is associated with breathing and heart complications, hospital admissions and even death. 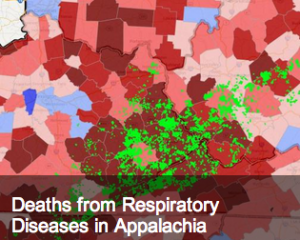 This map captures the correlation between deaths from respiratory disease in Appalachia and mountaintop removal coal mining.

Over the course of a year the researchers studied three West Virginia communities, two of which were near mountaintop removal mines, while the third was a non-mining site. By evaluating hospital records and the presence of airborne contaminants in the air, the WVU researchers calculated that there were significantly higher concentrations of dangerous particulate matter in the coal mining communities than in the mine-free zone.

Click here to learn more about the human cost of mountaintop removal.