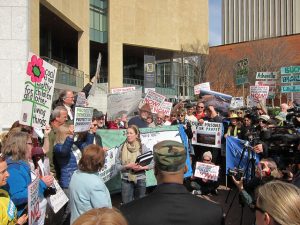 The vast majority of North Carolinians believe Duke Energy, not its customers, should be forced to pay for the cleanup of the Dan River coal ash spill and that state lawmakers should act now to prevent future spills, according to a new poll commissioned by the North Carolina League of Conservation Voters.

The poll, conducted by Public Policy Polling, surveyed 666 residents of North Carolina. Nine out of ten respondents had heard about the Dan River spill, and nearly half of those surveyed said they have heard a lot about the spill.

According to the poll, 93 percent of voters want state lawmakers to force Duke Energy to clean up the Dan River and 83 percent believe Duke should be forced to clean up all of its coal ash sites and move the toxic waste to dry landfills where it won’t threaten ground and surface water. Learn more about coal ash.

Notwithstanding state lawmaker’s claims that North Carolina’s coal ash problem needs to be studied more, 81 percent of those polled said lawmakers should “act now” to prevent the next spill by forcing Duke Energy to move its coal ash away from water sources and into safer lined landfills. More than three-quarters of respondents said they are more likely to vote for a state lawmaker that “gets tough with corporate polluters like Duke Energy.”

“The people have spoken and they demand swift and forceful action from our state lawmakers to require Duke Energy to clean up its mess,” said Dan Crawford, director of governmental relations for the North Carolina League of Conservation Voters. “While another disaster is just waiting to happen, Gov. McCrory and state legislators should not wait any longer to take the necessary steps to ensure these coal ash sites are cleaned up immediately.”

The poll also points to strong support for rooftop solar in North Carolina. When told that Duke Energy made $2.7 billion last year but still wants to reduce how much it pays North Carolina ratepayers that generate solar energy, more than half of those polled said they were “very concerned” with Duke’s approach.