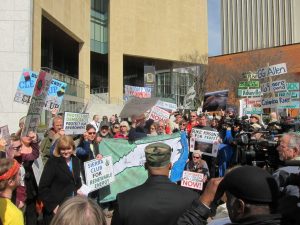 Amy Adams of Appalachian Voices smiles as the crowd echoes her call for “No More Coal Ash!”

Tuesday afternoon, more than 150 concerned citizens gathered at Duke Energy’s headquarters in Charlotte, N.C., to demand that the company take action to clean up its toxic coal ash. Coal ash, which is the byproduct of burning coal for electricity, is currently stored by Duke Energy in unlined, dangerous dams, next to vital waterways across the state.

The diverse crowd came together to deliver more than 9,000 petition signatures to Duke Energy CEO Lynn Good. The petition asks that Duke take full financial responsibility for cleaning up the devastating coal ash spill into the Dan River, and that the company agree to move the rest of its coal ash, stored in 31 ponds at 14 sites across the state, to dry,lined storage facilities away from rivers and lakes.

The event was the result of an amazing collaboration between a variety of environmental and social justice groups from the states affected by the Dan River spill — North Carolina and Virginia — as well as national interest groups. Appalachian Voices, Greenpeace, and Sierra Club collected petition signatures and planned the event along with Charlotte Environmental Action, Keeper of the Mountains, and NC Conservation Network. The official sponsors of the event also included We Love Mountain Island Lake, Democracy NC, Action NC, and NC WARN.

Chants about the importance of clean water and the dangers of coal ash opened the event. Citizens held signs with images of the massive coal ash ponds that plague North Carolina, some wore t-shirts describing the health effects of the different heavy metals found in coal ash, others carried banners and pickets, and a few drummers backed the chants.

The Green Grannies, a group of concerned women from Asheville, sang a few songs about coal ash and water, and the Reverend Nancy Hardy, from North Carolina Interfaith Power and Light said a prayer about peace and hope for change.

Amy Adams, the N.C. Campaign Coordinator for Appalachian Voices, gave a rousing speech emphasizing that the spill into the Dan River was completely preventable, and that Duke must be held accountable for the damage they have caused. Adams’ speech was received with cheers from the crowd, who eagerly echoed her call for “No More! No more coal ash in unlined ponds! No more leaks and seeps into our drinking water! No more stalling and no more excuses!” 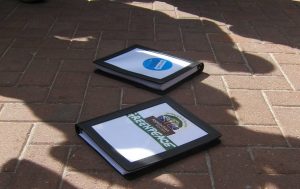 Over 9,000 petition signatures collected by Appalachian Voices, Greenpeace, and Sierra Club asking Duke to clean up its coal ash.

Sara Behnke, a mother, cancer survivor, and founder of We Love Mountain Island Lake, followed Adams with a wonderful speech about her family’s experience living next to Duke’s coal ash ponds at the Riverbend Steam Station. Behnke expressed outrage that Duke’s coal ash ponds are leaking arsenic-laden water into Mountain Island Lake which supplies the drinking water for 860,000 people. Behnke drew connections between the recent chemical spill in West Virginia and the similar threat that coal ash poses to drinking water.

Following Behnke’s speech, Elise Keaton from the West Virginia Keeper of the Mountains expressed solidarity for the need for clean water in both states. Luis Rodriguez from Action NC followed by calling on Duke to pay for the Dan River cleanup without raising customers rates. Rodriguez was joined by Cora Little, a senior member of Action NC who has spoken out against Duke’s recent rate hikes.

The final event speaker was Mary Anne Hitt, the director of Sierra Club’s Beyond Coal campaign. Hitt reiterated the need to protect North Carolina’s waterways from further coal ash pollution. She was joined by Amy and Cora to present two thick binders full of thousands of petition signatures to Duke security guards.

Although a Duke Energy representative had previously given the group permission to send three representatives into the building, a few minutes before Hitt’s speech concluded, security notified the crowd that Duke would not accept the petitions and that no one was allowed inside the company’s office.

In response, the crowd began circling in front of Duke Energy’s headquarters, chanting “Hear the voice of the people, accept the petitions now!” After about twenty minutes, as the group was beginning to disband, Hitt was about to leave the petition notebooks on the public side of the sidewalk in front of the company building, when a Duke Energy representative ran out and took the petitions inside.

While Duke Energy may have accepted the complaints of more than 9,000 people, concerned citizens, environmental groups, and social justice groups promise to be back with the same message: Duke Energy — clean up your toxic coal ash!