Common Sense, Nonsense, and a Climate Fight in the Making in Richmond 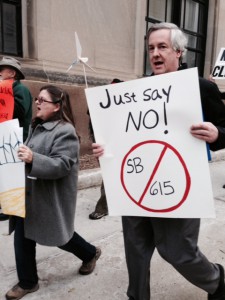 Days into the legislative session, a slew of pro-coal bills have been introduced to the Virginia General Assembly, including SB 615, a bill to undermine the EPA’s authority to limit carbon pollution from existing power plants in Virginia.

The 2014 session of the Virginia General Assembly is underway, and state lawmakers are wasting no time! We are tracking their activities and want to make sure you have all the information you need on several important bills coming up this session. Check back for regular updates and watch your inbox, we will be sending rapid response email alerts when important votes are coming up.

Legislation this session falls into two categories: the bright ideas that bring Virginia closer to a future of safe and reliable clean energy, and the downright crazy bills that do the opposite and must be stopped. Here is the breakdown, with a debt to the blog Power for the People for many of the details.

Currently, the rules around this matter are lax, allowing utilities to save up their RECs indefinitely and purchase them only rarely, which defeats the program’s purpose of spurring new renewable energy development. HB 822 and SB 498 would address this problem by essentially stamping a “use by” date on RECs so that utilities have to use RECs within five years. This change would result in utilities purchasing RECs in the market more regularly, incentivizing emissions-free sources.

Energy efficiency is the cheapest way Virginia can reduce its dependence on carbon-emitting fuels. Yet electricity providers in the commonwealth offer little to no opportunity for their customers to invest in energy efficiency measures for their homes. Instead, customers are left having to do it on their own. HB 1001 would require power companies and cooperatives to adopt such programs — particularly benefiting folks with low or fixed incomes.

In addition, several proposals are being considered this session that would break down longstanding obstacles to clean energy installation. Some homeowners associations still have neighborhood rules against residents putting up solar panels, and as long as individual rules was in place before 2008, they are valid and legal. SB 222 would remove such a ban, although restrictions on size and placement would still be allowed.

Two innovative approaches to clean energy project funding are also in the works. HB 880 and SB 351 make it easier for a larger number of Virginians to put up money to crowdfund any community endeavor, including a community-owned solar project. Excitingly, HB 1158 would facilitate a grassroots approach to sharing the cost and benefits of a solar installation by allowing “virtual net metering” so the clean energy generated can be divided among participating residents, similar to a server splitting a check evenly between members of a large party.

Then there are the bad bills. Every year, a handful of pro-coal bills are introduced that perpetuate the coal industry’s “war on coal” mantra. Of particular concern is SB 615 which would cripple the U.S. Environmental Protection Agency’s authority to set limits on carbon pollution from existing power plants in Virginia. We are starting to see similar bills pop up around the country as part of a national effort to thwart the EPA’s plans to regulate carbon pollution. To voice our concerns about the bill, Virginians gathered in Richmond on Monday and marched for action on climate change. The march was coordinated with Virginia Conservation Network’s Annual Lobby Day, which brings citizens together to meet with their representatives on a whole host of legislation that impacts conservation, transportation and environmental issues in the commonwealth. SB 615 could come up in committee as early as this week.

Yesterday, citizen champions for clean energy and environmental protection assembled to hold briefings on the issues, visit legislator’s offices, and finally marching on Capital Square for climate solutions. Our fight isn’t confined to one day, but continues through the end of this legislative session and beyond, so keep an eye on this blog (and on your email inbox) and stay involved!