Realities on the Ground in the West Virginia Water Crisis 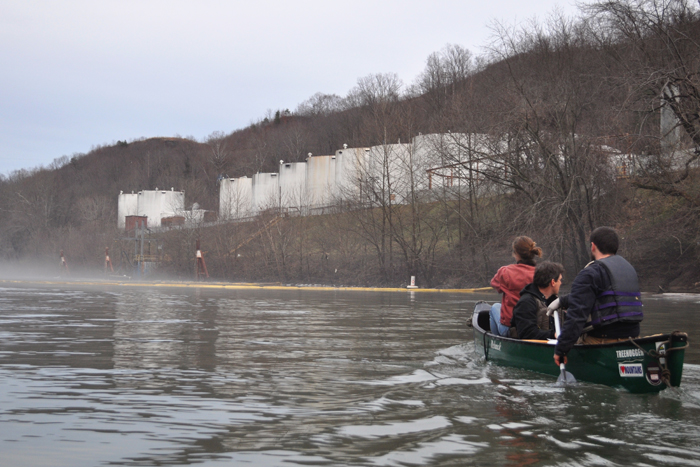 I checked Facebook early on the morning of January 9th, cursing my mild addiction to social media, and was suddenly glad that I had. I saw a news report of a chemical spill in Charleston, W.Va., which I quickly emailed to the rest of the staff at Appalachian Voices. I then packed a bag anticipating the potential to be gone for several days. I knew as little about what I might be doing through my work with Appalachian Water Watch as I did about what exactly had happened in Charleston.

As the morning continued, we learned more through news reports and our friends on the ground in West Virginia. A chemical storage facility had leaked a substantial but still unknown quantity of a coal-processing chemical, 4-methylcyclohexane methanol. The spill occurred in the Elk River, originating at a chemical company called Freedom Industries located just upstream of a drinking water intake for West Virginia American Water that serves more than 300,000 people. The Appalachian Water Watch team decided to collect samples at the spill site. We feel that it is important to obtain independent samples and test results in many cases, as self-reporting by industry is not always reliable. 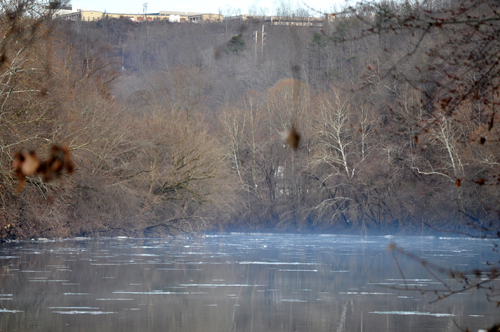 Blue haze over the Elk River, likely at least partially from the crude MCHM spill. Ice is visible on the river as well.

When we arrived at the Elk River, Rob Goodwin of Coal River Mountain Watch was there to meet us and orient us to the situation. At the river, we noticed the distinct sweet, licorice-like smell that first alerted nearby residents to the presence of Crude MCHM. There was also a low fog over the river, which might have seemed unremarkable except for its unusual blue tint. We were able to paddle down the river from the boat launch to the drinking water intake for West Virginia American Water, and then upstream to just below the spill site at Freedom Industries. We sampled at both locations, and are still waiting for the results. 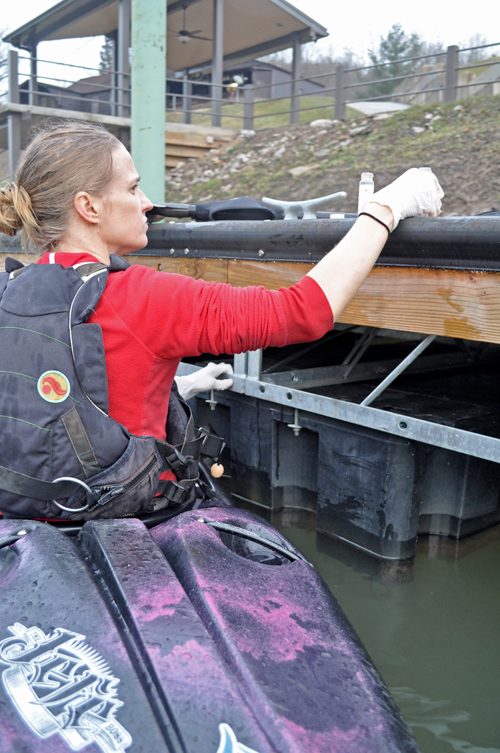 While on the water, we encountered a small boat that was presumably driven by employees of Freedom Industries. They strongly suggested we get off of the river “because of the smell.” A West Virginia Department of Environmental Protection boat also passed by. We paddled upstream as safely as possible, trying to limit our direct skin contact with the water, but were unable to limit our exposure to the fumes from the chemical. We recommend that others not visit spill sites without proper information and training.

I returned the following week, once the water ban lifted in communities surrounding Charleston to test tap water in homes. We worked with several other people from local nonprofits and universities to combine our efforts in collecting data throughout WV American Water’s service area. I tested water at several local residences and churches in rural communities in Boone and Kanawha counties. I was able to test in communities where the water ban had been lifted, and communities where the ban was still in effect. In the houses where I tested, some people had flushed their water lines but others had not. One trend I noticed was that it was much easier to smell the chemical when the hot water tap was running, even in households that had flushed their systems.

Armed with a small supply of gallon jugs of water, I stopped at several local water distribution sites to inquire about opportunities to test water in homes. Several communities had active water distribution sites, supplied with water from both state or federal agencies, and from local nonprofits. As more areas were deemed “safe” by WV American Water and water distribution decreased, many individuals still did not feel comfortable drinking the tap water and began to rely more heavily on the water supplied by volunteers. 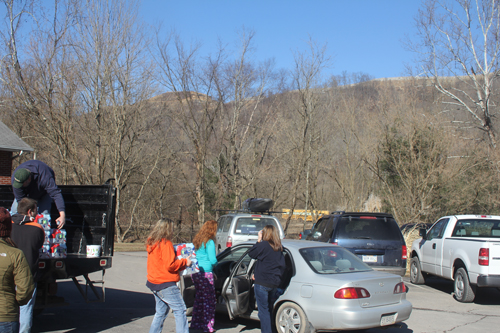 Water distribution in Ashford, W.Va. There is a mountaintop removal site visible in the background.

While most people I met with seemed well stocked with bottled drinking water, other problems arising from completely unusable tap water became apparent. This water ban was not just a ban against drinking the water, but also other uses, including bathing, washing dishes or doing laundry. I met families struggling to keep up with household chores that required water to complete. Laundry and dishes piled up, especially for families with many children.

Once back at the office, it became evident that though many officials were treating the problem as solved, residents were having ongoing problems with their water. We began to use our water pollution reporting site, appalachianwaterwatch.org to record the experiences of those on the ground and to share any new factual information that continued to trickle out. Over the last week, we have fielded calls and emails from people in Charleston and in the outlying areas, who continue to encounter the smell of the Crude MCHM in their water and experience health complications from exposure. One report indicated that children in the household had experienced a rash after coming in contact with the water on January 7 — two days before the spill was reported. Several callers asserted that the only apparent solution was to move out of West Virginia. All expressed continued uncertainty about the safety of their tap water.

As results of water sampling we conducted come in, I struggle with what to tell the people whose tap water I tested. Even when the results indicate no presence of the chemical, I can’t be sure that the chemical won’t work its way through miles of water lines, only to show up at their houses later. If the levels come back below the recommended 1 part per million, should I tell them the water is safe to drink? The chair of the Chemical Safety Board has commented that Crude MCHM and PPH should not be in drinking water at any level. People may be able to continue drinking bottled water, but what about all of the other daily activities they need water for — washing clothes, bathing, washing dishes? With so little information available, people are going to have to decide for themselves how much risk they can tolerate. Inevitably, those with less ability to change their situation may be the people who suffer the highest consequences because they can’t afford to move or even to continue buying bottled water.

A few positive developments have come out of an otherwise terrible situation. As local nonprofits work to provide water, neighbors who may not have seen eye-to-eye on environmental and public health issues before are beginning to talk. Existing citizens groups are increasing their collaboration through projects like the WV Clean Water Hub, and new groups are being created. Additionally, Appalachian Water Watch’s latest initiative, the Appalachian Water Watch alert site, has been getting steady use by impacted residents who want to share their stories.

We hope that providing a public platform to share the ongoing water contamination will help to urge agencies and politicians to find solutions.