Editor’s note: This story provides an update to A Cloud of Coal Mine Dust Over a West Virginia Community Points to Regulatory Shortcomings, a story that first appeared in The Appalachian Voice in March 2022.

“I’ve lived in this same house for 30-some years and I never had this problem before the mines came in over here,” says Rick Jones of Eunice, West Virginia.

Eunice is a tiny community in the Coal River Valley about an hour northwest of Beckley. From Jones’ back porch, he can see a portal, stockpile area and other components of the Black Eagle Deep Mine, an underground coal mine operated by Alpha Metallurgical Resources. Along with many of his neighbors, Jones is upset about the dust that blows off the mine and into his community.

“You can’t keep nothing clean around here,” Jones says. “That’s for sure.” 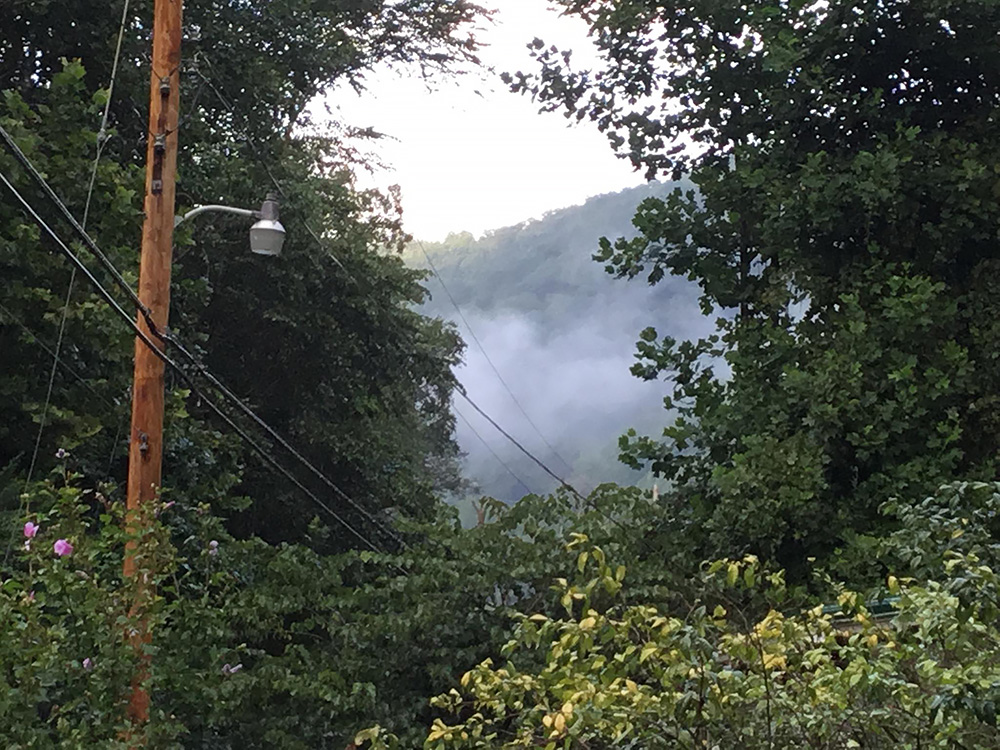 Clouds of coal mine dust intrude into the lives of residents of Eunice, West Virginia, as particulate matter from the nearby Black Eagle Deep Mine operated by Alpha Metallurgical Resources blows off the mine and into the community. Photo by Shelia Walk

Fugitive coal mine dust consists of particles of coal, rock and dirt, which become airborne and exit the boundary of mine property. In the case of the Black Eagle Deep Mine, much of this dust settles on and hovers over the residential area bordering the operation.


Shortly after the mine opened in 2018, Jones noticed what looked like dusty black cobwebs forming on picture frames and other surfaces inside his house. He went so far as to replace his furnace in hopes that the upgrade would better filter out the dust, but he says that didn’t help at all.

“Now I just clean the filter every month and change it out every two months,” he says. “It’s just aggravating trying to keep the place clean.”

In recent years, community members have filed numerous complaints with the state’s Division of Mining and Reclamation, asking regulators to force the mine to control the dust. To date this has not happened, and in June of 2022, 18 of the mine’s neighbors, along with Appalachian Voices, sent a letter to the state’s Division of Air Quality. The letter requested that the state install an air monitoring station in Eunice and that air quality officials confer with the state’s mine inspectors — all personnel within the West Virginia Department of Environmental Protection — to address the problem. This request was denied.

Shelia Walk lives in the second-to-last house in Eunice going towards the Black Eagle Mine and its coal stockpile, conveyor belts and access road. She estimates upwards of 350 coal trucks leave the mine each day, adding to a steady stream of coal trucks zooming by on WV Route 3 carrying coal from other mines to a nearby processing plant.

The result of all this traffic is that dust is continually deposited onto the public road and whipped up into the air by passing vehicles. 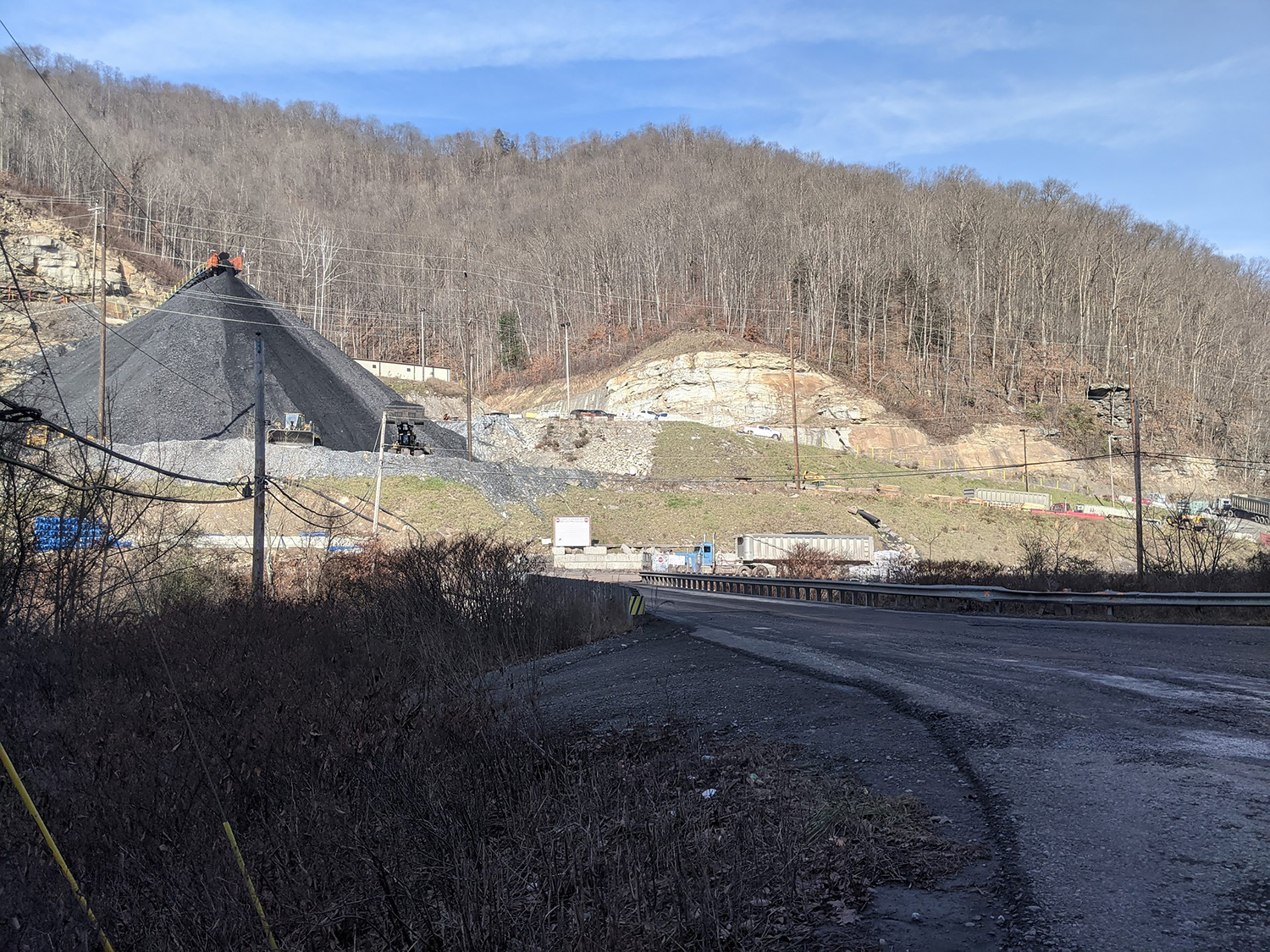 The stockpile area at the Black Eagle Deep Mine sits just a few hundred feet from the heavily traveled haul road used to transport coal away from the site. Photo by Willie Dodson

Walk’s primary concern is the health of herself and her neighbors, who have to live and breathe under this cloud of particulate matter.

Under the Clean Air Act, the U.S. Environmental Protection Agency sets ambient air quality standards, or targets, for the maximum concentration of various airborne pollutants. One of these pollutants is particulate matter with a diameter equal to or less than 2.5 micrometers, known as PM 2.5. Currently, the PM 2.5 standard is set at an annual average of 12 micrograms per cubic meter.

The EPA is currently reviewing the effectiveness of this standard in light of current scientific evidence, and is planning to update the rule by spring 2023.

Weigh in on air quality!

Weigh in on air quality!
In 2022 and 2023, the EPA will be reviewing standards for ozone and two different sizes of particulate matter, PM 2.5 and PM 10. Stay informed about future action opportunities on clean air issues and coal-related health concerns by subscribing to Appalachian Voices’ monthly e-newsletter, The Appalachian Advocate, at AppVoices.org/sign-up.

Does the Clean Air Act Matter in Mining Communities?

While changing the PM 2.5 standard from 12 to 8 micrograms would have a positive effect on public health on a national level, it is unlikely that this change would improve conditions for the residents of Eunice, West Virginia, at least in the near term. This is due to nuances in how the Clean Air Act works, as well as the vagueness of mining permits.

“The Clean Air Act is not designed to work quickly,” Mehalik says. “It’s designed to work over time to allow industries to install technologies that reduce pollution. Emissions go down over a 5- to 10-year time frame. But it often doesn’t help very much in very short-term exposures or spikes in pollution, unless they average out above a limit of 35 micrograms per cubic meter over 24 hours (midnight-to-midnight), which often is not the case for pollution spike events.”

Under the Clean Air Act, ambient air standards do not apply to specific facilities, but instead serve as benchmarks for overall air quality, measured at the state level. The EPA and state regulators rely on a series of air quality monitoring stations in order to determine whether a state is meeting these benchmarks.

In West Virginia, there are 13 of these monitoring stations measuring PM 2.5, but none are located in the state’s southern coalfields where fugitive coal mine dust is present. 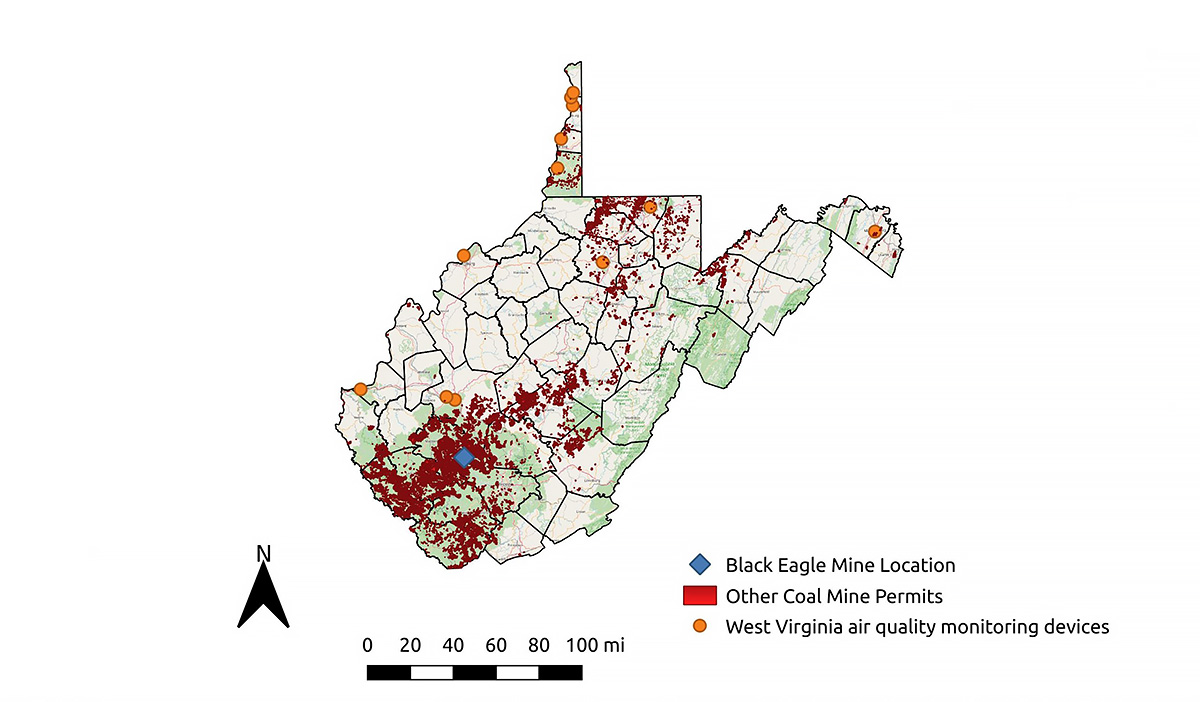 This map shows the locations of West Virginia air quality monitoring devices compared to the Black Eagle Deep Mine and other coal mine permits. Map by Matt Hepler

The June 2022 request by Eunice residents that one such station be located in their community was submitted as part of a public comment process for the state’s annual Air Monitoring Network Plan. WVDEP’s explanation as to why they denied this request cited a 10-year-old study of fugitive dust on a different mine, and 9-year-old data from a now-removed air monitor about 20 miles away, on the opposite end of a more than 3,000 foot-tall mountain.

The agency’s response also explained that industrial facilities that are expected to emit significant airborne pollution are required to obtain permits that impose hard limits on airborne pollutants like particulate matter. But WVDEP’s explanation did not acknowledge that this requirement is not generally applied to coal mines in the region, and no such permit has ever been required of the Black Eagle Deep Mine.

In the absence of stand-alone air quality permits, measures to control fugitive coal mine dust are included within mining permits. For the Black Eagle operation, like other coal mines, the mining permit describes broad strategies for reducing excessive dust, such as using water sprays on haul roads, but lacks any specific requirements or enforceable limits.

This means that even the acknowledgement of fugitive coal mine dust, let alone enforcing dust limits, depends on the diligence and judgment of mine inspectors. To date no citations related to dust have been issued against the Black Eagle Deep Mine.

As regional and national efforts to strengthen ambient air quality standards continue to build, the inaction of West Virginia regulators is wearing on individuals in Eunice.

“We just want [the DEP] to listen to what we have to say,” Walk says. “What if it was their parents, great grandchild, grandchild, child, or siblings living here?”

Exasperated with Alpha’s operations and the DEP’s inaction, Walk says, “We are at the point they can buy us out, or relocate us away from it.”

Rick Jones has arrived at a similar conclusion.

“Maybe they can buy us out and let us find someplace else to live,” says Jones. “But living in this community right here —- it didn’t used to be this way. I know years ago people lived like this in the coal camps, but this is 2022.”

Reflecting on his own upbringing in a heavily industrialized part of Pittsburgh, the Breathe Project’s Mehalik sees many commonalities with coalfield residents who are subjected to clouds of mine dust. Mehalik describes a swath of manufacturing centers and mining communities as “the industrial heartland of Appalachia” where air pollution from various sources leads to “very high rates of cancer, high rates of cardiac disease and respiratory disease, lower than average lifespans, disruptions in families and disruptions in communities.”

“It’s not fair for your family or community to have to bear this burden,” Mehalik says. “Demanding a higher quality of life is not unreasonable at all. In fact, it’s essential and it should be a starting point for how communities function.”