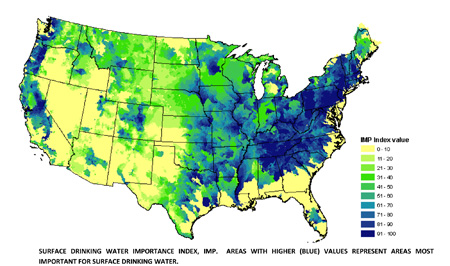 Plans to expand fracking in Virginia and East Tennessee could pose a threat to some of the Southeast’s most significant watersheds. In this map created by the U.S. Forest Service’s Forest to Faucets project, areas most important for surface drinking water are identified by higher blue values. Map from fs.fed.us

When the U.S. Department of the Interior released updated draft rules to regulate hydraulic fracturing on public and Indian lands, environmental advocates responded much as they did when the initial draft was released in 2012 — with disappointment.

In the days following the Interior’s announcement, federal officials and Secretary Sally Jewell were criticized for ignoring suggestions to improve the rule’s ability to protect air, water and public health. Environmental groups claim the rules remain riddled with loopholes and may even be weaker than the original draft. Natural Resources Defense Council president Frances Beinecke told The Washington Post that the new draft is a “blueprint for business-as-usual industrialization of our landscapes.”

The proposed regulations do not require companies drilling on public land to disclose chemicals used in the process, disregarding the frequent complaint that allowing companies to keep “trade secrets” may pose an unknown risk to communities near drilling sites. Instead, companies would be allowed to wait after drilling to disclose chemicals using FracFocus.org, a privately run website used to satisfy disclosure requirements in certain states.

Testifying before the U.S. House of Representatives Committee on Natural Resources, the founder and president of the digital mapping non-profit SkyTruth addressed this shortcoming. Since “no mechanism for effective public disclosure currently exists,” John Amos told committee members, a user-friendly, government-operated website should be developed to encourage the public to use and share data without restrictions.

In addition to Bureau of Land Management property in the western United States, the rules would apply to drilling in national forests in the East. In Appalachia, opponents of fracking are fearful of what that could mean for George Washington National Forest, which contains the headwaters of the Potomac and James rivers and the source of drinking water for four million people, including Washington, D.C., and northern Virginia.

According to a handout released by the Southern Environmental Law Center, 10 local governments surrounding the George Washington National Forest and two major metropolitan water suppliers in the area have submitted comments stating that fracking in the forest is not worth the risk. The Forest Service is expected to announce whether it will allow fracking in the national forest sometime in June.

Fracking is already taking place along the Cumberland Plateau in East Tennessee, and in March the University of Tennessee received approval to drill in the Cumberland Forest. University researchers plan to use the site study fracking’s environmental impact while also generating revenue to finance additional research. A report released by the National Parks Conservation Association in April identifies East Tennessee’s Big South Fork National River and Obed Wild and Scenic River as significantly threatened by the practice.

According to the Interior Dept., approximately 90 percent of drilling on federal lands uses hydraulic fracturing, but current regulations have not been updated in more than 30 years and were not written to address modern drilling technologies.