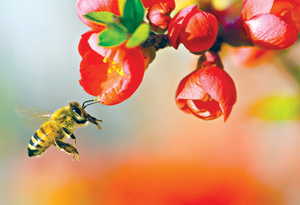 More than 30 percent of managed bee colonies in the United States perished this past winter, and beekeepers are looking for answers. While parasites, viruses and malnutrition can be factors in entire hives dying, evidence is building that pesticides are one of the major culprits.

Danny Jaynes, president of the N.C. State Beekeepers Association, says one insecticide, Bayer’s Sevin Dust, is known to cause bee death in the region. “Bees do not distinguish between the dust and pollen,” he says, and thus can unknowingly feed the poison to larvae. According to Jaynes, if Sevin Dust were used in a liquid form and at night when honey bees are not foraging, the insects would be protected, but few growers apply it in this manner.

A class of pesticides called neonicotinoids are also on beekeepers’ radars. These chemicals are dangerous to bees because, like Sevin Dust, they often won’t kill the bees outright, but contaminate foragers who then return to and infect a hive. Bee associations across the country banded together to sue the U.S. Environmental Protection Agency in March, calling for neonicotinoids to be banned.

Christmas tree farms could be another contributor to bee deaths in the region. Farmers often plant clover around their conifers to restore nitrogen to the soil, and since insecticides are used on the trees and the clover, pollen-collectors can easily be contaminated.

Beekeeping has become a tradition in Appalachia. Apiaries don’t need flat land and regional bees produce colorful honeys from blackberry and others tree blooms. With the current trend of bee deaths, however, keepers are worried about the future of mountain honey.

Read more about the legacy of pesticides in Appalachia here.