Hiker Overcomes Medical Condition to Complete Final Leg of AT 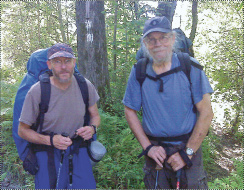 Ken Bordwell (right) and his occasional hiking companion, Joe Shelton, on the Appalachian Trail in New Hampshire. Bordwell’s advice to fellow hikers is simple. “Enjoy it!” he says. “I think everybody wants to do it a little too fast and would have more fun if they slow down a little and not expect so much of themselves. It’s hard work.” Photo by Mindy Wallace

Exploring the mountains wasn’t a part of Kenneth Bordwell’s childhood in Dayton, Ohio. His father read news clippings about Grandma Gatewood, a remarkable woman from southeast Ohio who hiked the Appalachian Trail from Georgia to Maine three times, but Bordwell didn’t step foot on the fabled path himself until his honeymoon.

During that Smoky Mountains vacation in 1965, he covered a mere 2.5 miles of the 2,200-mile trail. That was all it took to draw him back. While on a return trip several years later, he picked up a book documenting a thru-hiker’s adventure. After that, Bordwell started traversing the renowned trail in earnest, section by section.

“There’s something about the Appalachian Trail — when you get the bug you’ve got the bug,” says Bordwell, who now lives in Cincinnati. “Appalachia’s the same way. It’s lovely country, from one end to the other.”

He tackled the trail intermittently throughout the years, beginning with the southern portions. Bordwell’s favorite section is somewhere in those central and southern latitudes — he says it’s either Tennessee’s Laurel Falls, or the Mt. Rogers area of southwest Virginia. Or it could be the commonwealth’s Grayson Highlands State Park, or the Nantahala range in western North Carolina. Or maybe it’s the Smokies.

His ambitions hit a speed bump when he went to the hospital for back pain in 2008 and an X-ray of his spine incidentally uncovered a life-threatening weakness in the wall of his aorta, the body’s main artery. An estimated 1.2 million Americans have this condition, known as abdominal aortic aneurysm. If the aorta wall fails, the consequences are often fatal, particularly for men like Bordwell who are over 60.
At the time, doctors said operating would be premature and risky. Instead, they monitored his aorta every six months while Bordwell pushed onward, following the trail along the East Coast’s spine.

Three years later, his condition had developed into a bulge that was close to rupturing. He was presented with a choice: go through surgery to replace the aorta, or try a new treatment where a stent is inserted into the artery near the thigh, threaded up to the troubled area, and expanded to seal the aorta.

He went with the latter, scheduling the procedure for December so as to not interfere with peak hiking season. At that point, he was 100 miles shy of completing his goal.

Bordwell acknowledges that the ensuing days and weeks were “a little rough.” Six weeks after the stent was inserted, however, he was fit enough to resume stacking firewood.

That spring, he strapped on his backpack and returned to the landmark trail’s northern reaches. On Aug. 24, 2012, at 70 years old, Bordwell completed the Appalachian Trail.

With that goal accomplished, Bordwell is ready for a change of pace. His next adventures will also be on long-distance trails, but this time he’s taking a bicycle.