Seeing the Forests Because We Left The Trees 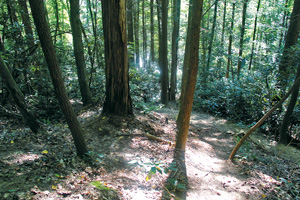 The region of central and southern Appalachia has more national land of any other region east of the Rockies.

If you combine just two of our eight national forests—the adjacent George Washington and Jefferson national forests—you have one of the largest chunks of public land in the eastern U.S. That region encompasses 39 counties in Virginia, West Virginia and Kentucky and includes notable spotlights like Shenandoah National Park, Rapidan Wildlife Management Area and Douthat and Grayson Highlands state parks. With 2,193 hiking and biking trails—including 330 miles of the Appalachian Trail—in these two forests alone, even the most rabid eco-tourist should have plenty do to for a while.

The parks and forests of Appalachia bring tourism, and tourism brings tourist dollars which help to boost the economies of our small mountain communities. Areas that had no major industry or relied on agriculture or a single industry before the 1970s have either dwindled or flourished, depending on which side of the tourist fence they now stand on.

After the railroads were closed in the late 1970s, the construction of the 34-mile Virginia Creeper biking trail on an old railroad bed and the embracing of Appalachian Trail thru-hikers virtually transformed the dying town of Damascus, Va., into an outdoor mecca today, complete with an annual Trail Days Festival which draws thousands of visitors.

“The trail completely changed [Damascus] from empty store fronts to a bustling town,” said Nancy Lamb, an active resident also known by some as Mrs. Damascus. “The difference was the leaders who put it together. They were very farsighted.”

In contrast, the small hamlet of Lansing, N.C.—located on the same old railroad line as Damascus—elected not to continue the Creeper Trail into their area. Today, Lansing storefronts sit empty and the once charming mountain town has a sad, neglected feel.

But although we have a wealth of state and federally-designated land, Appalachia is also faced with serious issues that threaten the tranquil beauty that has helped some communities prosper.

In the eastern part of West Virginia, near the George Washington National Forest, mining towns like Fayetteville and Ansted experience economic stability and diversity in spite of the mining threatening their towns, thanks to the yearly influx of hikers, kayakers, climbers and car campers that come to the national forest and New River Gorge area to vacation.

Yet if you look at map of western West Virginia or eastern Kentucky—where mountaintop removal coal mining is the most prevalent—you would be hard-pressed to find much of the green that designates national and state forests or parks. If you compare this to a map outlining the most poverty-stricken areas in those states, the correlation would be strikingly clear.

Towns like Benham, Ky., which once grew a thriving tourism trade, are now being threatened as dwindling coal supplies force companies to move extraction sites closer to populated areas. Outdoor recreation destinations such as Boone, N.C., cave to pressure from state agencies against items such as providing bike lanes to enhance the town—perks that would elevate Appalachian towns to rival the tourist meccas of the country’s western states.

But as long as the blue and green misty mountains of Appalachia stand strong, people will come.

People will come to escape the heat of the southern cities, to let the cool mountain breezes and soft summer clouds invade their senses. People will come to sit beneath majestic old trees and peer deep into the valley far below, to contemplate how small they are in this enormous world. People will come to wade in our streams and marvel at the cold, crisp waters, to listen to mountain music and to revel in the ethereal, eternal and ancient beauty that is Appalachia.

Yes, as long as we preserve our mountains, people will come.