The Southern jewel of the Appalachian range offers as stunning a landscape as any of its northern neighbors.

The Simple Sweetness of Amicalola Falls 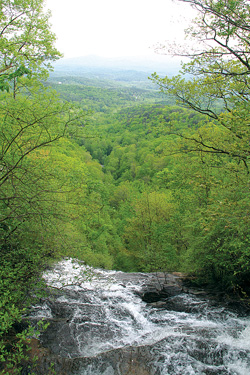 Looking off the 700+ foot drop of Amicalola falls. Photo by Jamie Goodman

Cradled at the base of the Appalachian mountains in northern Georgia, Amicalola Falls State Park is backcountry hiking, car camping, bio-exploring, luxury dining and day tripping all rolled into one.

At only 829 acres, this small state park nestled in the Chattahoochee National Park packs a tremendous amount of beauty into one small space. The centerpiece is the aptly named and stunning 729-foot Amicalola Falls, tumbling down the south face of the southern Appalachians into the rolling foothills of Georgia (Amicalola means “tumbling waters” in Cherokee). Visitors seeking to join the Canyon Climber’s Club can climb the steep trail—including 604 steps—up to the top of the falls.

An 8-mile trek through the park starting at the base of the falls provides one of two access points to Springer Mountain and the southern terminus of the Appalachian Trail.

In addition to the traditional and well-maintained state park facilities, two bonus finds are the luxurious but surprisingly affordable 56-room lodge and dining facility perched on the rim and the Len Foote Hike Inn, an eco-friendly, full-service backcountry lodge accessible only by a 5.5 mile moderate trail. For the Hike Inn, all you need to bring is your toothbrush and a change of clothes—they provide the hearty family-style meals!

The nearby towns of Ellijay, Dahlonega and Clarkesville—all nestled along the southern edge of the Chattahoochee—are remarkably charming and offer starting points for afternoon or multi-day adventures into the backcountry.

Visit amicalolafalls.com for more details on the area.

Spectacular vistas and rugged geology mark the beauty of Cloudland Canyon State Park. Cut into the side of Lookout Mountain, Cloudland’s dramatic gorge plunges more than 1,000 feet in places. Two waterfalls cascade through the bottom of the gorge, and more than 20 miles of trails wander through the 3,400 acre wilderness. Visit Cloudland Canyon. Photo by R. McClenny

Rome: The Mid-Sized City That Could 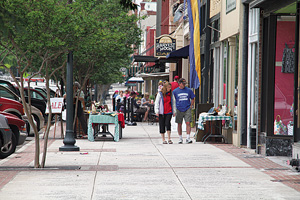 I’ll refrain from making the usual jokes about “when in Rome,” because Rome, Ga., is a city unto itself.

This mid-sized burg (pop. 34,980) at the southern end of the state’s “High Country plateau” is the largest urban area in northern Georgia and is most notable for its history and proximity to beautiful places. Rome is situated at the confluence of two Appalachian-born rivers—the Etowah and Oostanaula—which meet in the historic downtown to form the Coosa River. 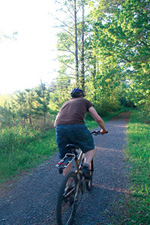 Known as a rich historical tourism destination—and home of the minor league baseball farm team, the Rome Braves—this bustling little town’s eco-tourism opportunities are beginning to peek through. Plans are underway, courtesy of the Coosa River Basin Initiative, to create a 160-mile paddling trail on the scenic Etowah River, starting in Dawsonville and ending in downtown Rome (the entire section currently has only five public boat launches).

Rome also boasts 40 miles of prime mountain biking paths, located on the largest college campus in the world—the mostly untamed 26,000-acre Berry College. With less than 2,000 current students, Berry has plenty of wilderness trail to share: from gentle, flat riding beside picturesque, teeming ponds, to the remote level 5+ Hurtin’ Gator. Be forewarned, these trails are not well-marked and the map is a little confusing, so make sure you have plenty of daylight to explore, or you may be riding back to your car in the dark.

Just a few minutes from Rome is the quaint town of Cave Spring. A mere $2 will buy you a tour of the namesake cavern and a chance to sample some of the most delicious spring water I have ever tasted. Bring your own jug.

Learn more about this “Appalachia meets the South” town at romegeorgia.com.

According to Coosa River Basin Initiative executive director Joe Cook, the biggest threat to rivers in north Georgia is damming. With the continuously thirsty metro Atlanta area less than two hours away, demand for water sources is on the rise. Currently, the Appalachia region of Georgia is home to more than a dozen major reservoirs, with proposals on the books to create more—four in the Etowah River watershed alone.

The damming of rivers not only fragments habitat for indigenous fish, the daily water releases of dammed sections such as the lower Etowah below Allatoona Dam create such unnatural fluctuations in water temperature and flow that many sensitive species have literally been washed away.

“There used to be more than 70 species of fish on the Lower Etowah, about half of those are no longer [there],” said Cook. “The mussels have taken an even greater hit. Biologists say there used to be 51 species in the Etowah Basin. Today, you can’t find any of those in the 48 miles [below the dam].”

A proposed highway system in north Georgia has the potential to plow through some of the most pristine landscapes of Georgia, North Carolina and Tennessee. One potential route of the I-3 interstate—intended to connect Savannah, Ga., to Knoxville, Tenn.—would drive the corridor past the picturesque tourist towns of Ellijay and Dahlonega, Ga., before plunging into the Chattahoochee and Nantahala national forests, finally tearing along the edge of Great Smoky National Park. For more information, visit wayssouth.org