As the Old North State embraces ecological protection and heritage tourism, visitors flock to the mountains and foothills.

Hot Springs: Peace and Quiet With A Splash of Adventure

Resting between two ridges in western North Carolina, Hot Springs is a rustic town well-known for playing host to Appalachian Trail hikers. Hot Springs has quietly placed itself on an area smaller than a city block, yet offers travelers more than enough adventure to keep busy—if you can rouse your mind away from the tranquility of the stunning vistas.

The center of town holds, in its modest streets, ArtiSun Gallery, where I stop to admire pottery, jewelry and other local art. As I walk down the street, I pass locals selling crafts outside of the Harvest Moon Gallery and Gift Shop. I buy a cup of fresh squeezed lemonade and talk to the owner.

He tells me that if I want a bit of nightlife later on, some live bands usually play at The Iron Horse Station, a restaurant and hotel in town. But, for afternoon entertainment, he suggests a few hiking trails and off I go. 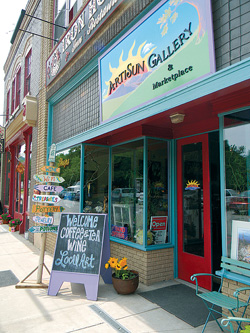 Lover’s Loop is my destination for a short afternoon hike. As I enter the trail, I am greeted by the river meandering along. I meet a few backpackers camped out along the way—I assume from their rugged appearance they are thru-hiking the Appalachian Trail, which runs almost directly through town.

At an opening along the path, I catch a screenshot of some tubers floating down the river. I watch as they laugh, splashing down a small rapid. I wish I was out there with them. The French Broad River offers some great moderate level rapids for those wishing to raft, canoe or kayak.

I head back to town after my hike and hit up Bluff Mountain Outfitters, an outdoor recreation store named after Bluff Mountain—one of the highest peaks in the area and a great place for hiking and mountain biking. In 1997, local groups fought hard to stop the mountain from falling to the hands of timber harvesting.

I grab a bite to eat and, as dusk falls, I head down to the Hot Springs Resort and Spa. Discovered by Native Americans, the healing mineral springs have attracted visitors for 200 years. A reservation is recommended for those wishing to take a dip in a jacuzzi-style hot tub. I relax into the water. For Appalachian Trail hikers and lovers of mountain soaks, it just doesn’t get any better than stretching out in a tub of warm mineral waters next to a meandering river—all wrapped in the ridges of some of Appalachia’s most resplendent mountains.

Located near the Pisgah National Forest, Blue Ridge Mountains, Appalachian Trail and the French Broad River, Hot Springs is perfectly placed, unimposing and offers travelers a unique, relaxing and active place to spend a weekend or a week.

Visit: hotspringsnc.org/index.php for a detailed list of activities and eco-friendly places to stay.

The North Carolina Department of Transportation is planning to construct a ten mile stretch of four lane highway that would cut through the Nantahala National Forest in Graham County, N.C.

The highway, known as Corridor K, would run from Robbinsville to the community of Stecoah, including a 2,870 foot tunnel blasted into Stecoah Mountain.
Graham County residents are debating the necessity of this $378 million construction in public hearings.

“Like a lot of the communities in this area, Graham County has adopted economic development plans that focus on increasing heritage tourism, not the kind of heavy industry that looks for a four-lane highway,” said Bob Grove, a member of the Western North Carolina Alliance.

Written comments on the project are being accepted by NCDOT until June 20. Email project coordinator Ed Lewis at elewis@ncdot.gov and visit wayssouth.org to find out more.

Vacationers looking to immerse themselves in Appalachian history, craft, music and dance in a peaceful mountain setting should look no further than John C. Campbell folk school in Brasstown, N.C. 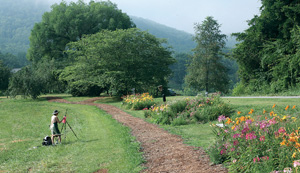 The school offers a catalog full of week-long and weekend classes in subjects that offer a broad understanding of Appalachian mountain heritage. Students can learn to weave or spin, blacksmith, play the banjo, contra dance, garden or forage for edible forest plants–and that’s just the beginning.

The school was founded in 1925 by Olive Campbell in memory of her late husband John. During her travels in Europe, Olive visited the folk schools of Denmark and Sweden, and resolved to bring the concept to Appalachia.

A folk school, she reckoned, would help to preserve mountain crafts and offer a source of education and moneymaking that did not require students to abandon the family farm or their traditions.

With enthusiastic support from southwestern North Carolina residents, land was donated and buildings constructed, and the folk school began. To honor the original mission and the Brasstown natives who were essential to the founding, the school still offers tuition discounts and scholarships to local residents.

While traditions at Campbell still remain much the same as in its infancy, school administrators have not been afraid to veer slightly into the 21st century. Recently, construction was finished on the campus’ first Energy Star rated building, featuring a solar water heating system.

The folk school is also collaborating with Young Harris College to study the effects of a predatory beetle on the woolly adelgid, the invasive pest that has been devastating old growth hemlocks in Appalachia, including the school’s grove.

To begin your journey to the heart of Appalachian handicraft , both traditional and modern, visit folkschool.org.

The Train Depot in Bryson City. Photo by Brian Stansberry

For those looking to explore the quieter side of the Great Smoky Mountains, Bryson City, N.C., provides the perfect hub.

The thriving town is located just outside the eastern boundary of the national park, and is bordered to the south by the Nantahala National Forest and the Cowee Mountains.

To the east of town, the 469-mile Blue Ridge Parkway reaches its highest point at the 6,053-foot Richland Balsam overlook.

The Great Smoky Mountain Railroad departs daily from Bryson City for tours through the Nantahala Gorge or by the Tuckasegee River. The railroad follows the path of the historic Murphy Branch rail line originally laid in 1884. Visit greatsmokies.com for more information. 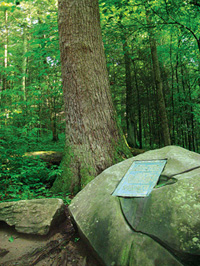 By Meg Holden
Joyce Kilmer, author of the poem “Trees,” inspired many people to take pleasure in the natural world around them. The Joyce Kilmer Memorial Forest was established to honor Kilmer’s works and service, and is part of the Joyce Kilmer-Slickrock Wilderness—18,000 acres of virgin wilderness in North Carolina and Tennessee. Some trees within the forest are over 400 years old. An easy, figure-eight shaped trail loops through the forest. The lower loop, 1¼ miles long, passes the memorial plaque, while the ¾ mile upper loop passes by a stand of yellow poplars that are over 20 feet around. Visit: Joyce Kilmer Memorial Forest.