400 hundred years of U.S. history and an eternity of natural wonders run from the Appalachian Mountain Ridges to the Shenandoah Valley and on to a coast that is one of the south’s finest. 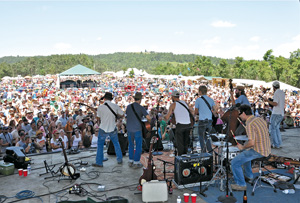 Playing to the crowd at the 2010 FloydFest. Photo by Russ Helgren.

By Bill Kovarik and Jason Coleman

If there is a poster child for music, art and recreational tourism in Appalachia, it would have to be Floyd, Virginia.

For most of the 20th century, Floyd County was just another sleepy farming community along the Blue Ridge Parkway, known for little more than high-octane moonshine.

But over the past two or three decades, as retirees and other refugees from urban life settled here, a thriving music, arts and crafts scene came together in a dozen different venues.

Floyd’s musical reputation goes back to the dawn of the bluegrass era. In the 1980s, local bluegrass bands began playing at the Floyd Country Store every Friday night. The store became a fixture of bluegrass culture and, recently, an important anchor for the “Crooked Trail” heritage music tourism route through southwestern Virginia.

Another major contributor to the music scene is Floyd Fest, celebrating its tenth anniversary this year. Kris Hodges and Erica Johnson, restaurant owners in Floyd, wanted to bring world-class entertainment to the New River Valley. What began in 2001 as a gathering of 1,500 like-minded rock and bluegrass lovers has grown to about 12,000 people enjoying entertainment from around the world.

Mining the Beauty out of the Mountains

By Jillian Randel
Virginia, with all its natural wonders, is not immune to the same threats as neighboring states, West Virginia and Kentucky. Mountaintop removal practices plague the southwestern part of the state. A permit is currently pending for Ison Rock Ridge, a surface mine that, in addition to exacerbating health effects associated with current surface mining practices, would destroy three miles of streams and fill nine valleys with more than 11 million cubic yards of rock and dirt. Visit: samsva.org for more information.

“Our vision was to produce a world music festival for the entire family and that’s not just a catch phrase, we mean it,” said Linda DeVito, operations director for Across the Way Productions. “We pride ourselves in the fact that most of us have kids, we wanted to provide a festival where a patron, even us, would feel comfortable in bringing our kids to.”

Still other music venues include the Dogtown Roadhouse with concerts every weekend, the June Bug music education center and the National Music Festival, a classical music festival starting this May that, organizers hope, will be an annual event.

Floyd is also known as a Mecca for serious artists and crafts folk, and their anchor is the Jacksonville Center—an old barn near town that was converted ten years ago into an art studio with a gallery featuring pottery, textiles, painting and crafts shows.

According to Lydeana Martin, the county’s community and economic development director, music and arts tourism brings an estimated $18 million a year and at least 200 jobs to Floyd.

Efforts to take advantage of tourism and broaden the county’s economic base include an expanded farmers’ market and two new county task forces to address land policy and agriculture and forest economic viability. 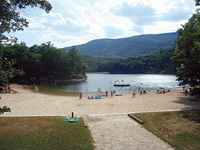 By Jamie Goodman
Tucked away in the Allegheny Mountains in western Virginia, Douthat provides a sturdy blend between moderately outdoorsy and activity-based family vacations. The 4,493-acre park offers 40 miles of wildlife-rich hiking/biking trails, a 50-acre lake with swimming and boating and a full-service restaurant. Those seeking more remote excursions can explore the surrounding George Washington National Forest, which boasts hundreds of miles of hiking trails and more than 30 campgrounds ranging from primitive to full-hookups. Visit: dcr.virginia.gov/state_parks/dou.shtml.

Historically rich and classically pastoral, the Shenandoah Valley of Virginia is searching for sustainability through agricultural tourism.

On a Shenandoah farm just north of Lexington, Cyrus McCormick launched an industrial revolution in agriculture by inventing the first mechanical harvester in 1831.

A dozen miles away, in the shadow of the Appalachians, farmer-philosopher Joel Salatin launched a different kind of revolution on Polyface Farms. Sustainable agriculture, he hopes, “will see thousands and thousands of diversified farms serving their bioregional locavores.”

Although separated by 180 years of social change, McCormick and Salatin would feel more at home on each others farms than on the sprawling industrial poultry complexes that dominate the landscape further up the valley.

Many of Salatin’s farm neighbors feel the same way—they are not entirely happy with the sprawling suburban developments that threaten the pastoral vistas and the farming way of life. Nor has it been easy to compete with industrial scale farms that produce high quantities of food at the expense of quality and the environment.

The idea of rolling out a big green welcome mat for agri-tourists is, in large part, a hope that small and moderate sized farmers can supplement their income with a wide variety of activities that fall into the category of agri-tourism.

The activities range from farm-stay family vacations to wineries and horse farms that offer deluxe catering for weddings and special occasions. They also include the increasingly familiar activities like U-pick farms, corn mazes, tractor rides and pumpkin patches.

To become better known as a major agri-tourism destination, a group of county and regional planners, working with farmers, is launching a program called Fields of Gold. They hope it will be to agri-tourism what the Crooked Road of southwestern Virginia is to music. The state agriculture department recently approved planning funds for the first stage of the initiative, with every county in the central valley chipping in.

Anchoring the agri-tourism concept is the Frontier Culture Museum, a state-supported living history museum where farm life from Africa, Europe and early North America is re-enacted daily. Offering museum-like tours and summer camps for children, the museum recently faced drastic state funding cuts. The McCormick museum, half an hour south on I-81, also offers a link to the past.

Tourism is not new to the Shenandoah. The region has long been known for its caverns–Luray, Shenandoah, Grand, Skyline and Endless, among others.

The area is also gaining attention for the Shenandoah Valley Wine Trail and for dozens of other destinations that fall under the label of agri-tourism. The process of organizing and marketing animates the Fields of Gold initiative.
“This area has a rich history and culture that surrounds land based economies,” said Monica Plecker, a planning assistant with the Central Shenandoah Planning Commission. “There is an identity, a sense of rural living, that some feel is dwindling. The initiative will brand the region as agri-tourism destination with a variety of options.” 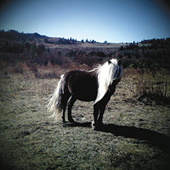 A wild pont of Grayson Highlands, Photo by Katie Boyette

Stunning views, unusual geologic formations and wild ponies—Grayson Highlands State Park in the Jefferson National Forest has all these and more. Located on US 58 between Independence and Damascus, Va., Grayson Highlands attracts hikers, campers and equestrians from all over the U.S.

The state park is home to forests, as well as balds, high-altitude meadows with rocky outcroppings and low vegetation. Balds such as the ones in Grayson Highlands threatened to disappear in the early twentieth century, when state and national parks prohibited large-scale livestock grazing. Surrounding forests began reclaiming the exposed grassy and heath balds until maintenance measures were enacted.

The Grayson Highlands balds are maintained by a herd of introduced wild ponies. These ponies are accustomed to visitors and will not shy away from humans, but should not be petted or fed.

Camping, horseback riding, fishing and hiking are permitted in Grayson Highlands. A fall festival is held every year and includes live music, demonstrations of pioneer life, a craft sale and an auction for excess colts from the pony herd. More information is available at dcr.virginia.gov/state_parks/gra.shtml.