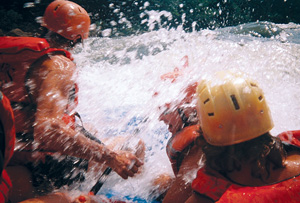 Once a booming coal town in southern West Virginia, Fayetteville thrives today because of the outdoor recreation and tourism industry. Yet mountaintop removal threatens the town as coal once again creeps closer to Fayetteville.

“As coal mining waned, tourism picked up the slack and boosted the economy,” said Mark Lewis, executive director of West Virginia Professional River Outfitters. “Most of the places in southern West Virginia where mining occurred didn’t have that. They didn’t have the New River Gorge to fill the void.”

“We have the New River and the Gauley, two of the best rafting and kayaking rivers in the country, and they are only about 15 miles apart,” Lewis said.

Last year, commercial rafting outfitters guided 140,000 people down the New and the Gauley.

“A lot of the commercial activity is due to the rafting industry, [but] private kayakers, as well as the climbers, make up a significant part of the economy,” Lewis said.

Climbing didn’t prosper in the New River Gorge as early as whitewater did, but the area, with 1,600-plus rope routes, draws thousands of climbers throughout the world each year.

The shift to an economy based on outdoor recreation and tourism altered the town’s demographic and culture. Lewis described Fayetteville as a sleepy town in the ‘80s, where most of the activity revolved around the courthouse.

A timber management project introduced in the Monongahela National forest doesn’t come without controversy. The Upper Greenbrier North Project will include timber harvesting and regeneration projects, and has citizens complaining about possible risks to the environment. The project fails to address a number of threatening concerns. Regeneration efforts include fencing off certain areas to keep out deer, while failing to address the greater problem of deer overpopulation; extensive use of herbicides that are not favored for heavy applications; and stream restoration plans that fail to address riparian systems as a whole. The project also fails to address the endangered northern squirrel population that relies heavily on the Monongahela Forest to repopulate. Visit: Greenbriar North Project Comments to comment.

“There weren’t near the number of restaurants or little businesses in town,” said Lewis. “It’s very different than most towns you’ll find in southern West Virginia because of the whitewater and climbing. This is a unique little eclectic community. It really transformed the town.”

In 2006, Outside magazine named Fayetteville a top-ten destination in the country for its paddling, climbing, biking and trail running.

But that isn’t the only top-ten list the area made. In 2010, American Rivers, a conservation organization, named the Gauley among America’s Most Endangered Rivers because of the devastating effects of mountaintop removal.

As mountaintop removal creeps closer towards Fayetteville, the town, and in turn the economy, may be ruined.

“People of Fayette County are really concerned,” said Stephanie Tyree, organizer for Ohio Valley Environmental Coalition (OVEC). “It’s one of the few areas in the state where tourism has really taken off. You see our state propaganda, ‘Wild and Wonderful,’ yet, just in the backroom, they are blowing up the mountains.”

Unfortunately, the backroom is only 3 ½ miles from town. In the past, surface mining took place on the edges of Fayette County.

“[This] is the first time surface mining has been right in the center of the county,” Tyree said. “It basically surrounds Fayetteville and the New River and is creeping closer.”

Frasure Creek Mining, a subsidiary of Trinity Coal, which is owned by the Indian conglomerate Essar Group, has three active surface mining permits, with six more pending or under review, near Fayetteville.

“[This is] the number one recreation destination in West Virginia,” said Vivian Stockman, project coordinator for OVEC. “And now we have an Indian company buying up all these mountaintop removal permits and with them, they are going to blast away this beautiful tourist hotspot.”

The New River Gorge offers some of the best sandstone climbing in the country. The area, known around the world for its 1,600-plus rope climbs, has limitless bouldering and hundreds of deep water solo routes on the cliffs above Summersville Lake.

The 70,000 acre New River Gorge is so vast and relatively new, compared to other U.S. parks, that there is still much unclimbed territory.

One popular climbing “spot” is The Endless Wall, aptly named because it is 4 miles long. Many of the Endless Wall cliffs range from 80 to 140 feet tall. First ascents abound. 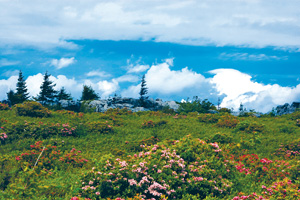 If you’ve never been to eastern West Virginia, you might wonder why the Mountain State is nicknamed “Almost Heaven.” If you have been, you’ve probably wondered why anyone ever included “almost” in the phrase.

The highlands country of West Virginia is part of the Allegheny Mountains that run north into Maryland and Pennsylvania. The name Allegheny comes from a Lenape Delaware word for the mythical peoples who first inhabited the area thousands of years ago.

This highlands region falls into the Monongahela National Forest (the “Mon”), which makes up the heart of the central Appalachians. Like the Blue Ridge of southern Appalachia, they construct the Eastern Continental Divide, creating an especially rich, lush ecosystem to the west of the high elevation ridges. The frigid spruce-fir forests of the far north, the north woods of New England and the extremely diverse mixed-mesophytic (moist) hardwoods of Appalachia all meet here.

The northern part of the Monongahela is home to the Dolly Sods Wilderness. The wilderness area is composed of a high elevation plateau that makes up part of the continental divide, and is the highest plateau of its type east of the Mississippi. It includes an area of 10,215 acres of wilderness for backpackers to explore. Covered with extensive rocky plains, upland bogs and sweeping vistas, it is the most popular wilderness area in the state.

The area’s unique microclimate is extremely cold and thus the plants and animals there are similar to ones found about 1,600 miles farther north. Dolly Sods is adjacent to other natural treasures like the Canaan Valley National Wildlife Refuge, which hosts some of the best cross-country skiing on the east coast, and the Seneca Rocks-Spruce Knob National Recreation Area, home to world-renowned rock climbing.

This area, like all of the Allegheny highlands country, is filled with small farms, tourism and a strong sense of Appalachian old-time culture—but it is currently under threat. Located over the Marcellus shale seam that contains natural gas, Dolly Sods is near several permitted sites to drill for natural gas using hydraulic fracturing methods, or hydro-fracking—a technique of drilling that injects liquid slurry into drilling sites to break up shale rock formations and allow more natural gas to be released.

Although the industry lobbied against disclosing what the fluids contain, congressional and EPA reports have found that many of the chemicals in the slurry, such as benzene, are known carcinogens, endocrine disruptors and generally hazardous to human health. Studies have shown that the process can pollute local water supplies with heavy concentrations of volatile organic compounds and heavy metals, like arsenic, lead and copper, which also cause cancer, kidney failure and fertility problems.

West Virginia is known for its natural beauty and rugged mountains, but it is also known for its poverty and history of exploitation in the coalfields. The Allegheny highlands and plateau provide an alternative economy to yet another extractive industry. The Dolly Sods Wilderness area is a unique place, as is the rest of the Mountain State. Protecting these mountains from destruction and using them for positive economic development will help ensure their future. 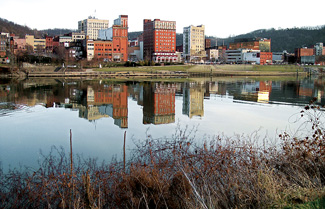 Wheeling, located in the northern panhandle of West Virginia, has a rich and diverse history. Founded in 1769, trade along the Ohio River and the National Road transformed this frontier town into “the gateway to the West” by the mid-nineteenth century. The Wheeling Convention established West Virginia’s independence from Virginia in 1863. Iron and steel mills on the banks of the Ohio River helped Wheeling become a center of industry by the late 1800s.