The mountains of Ohio and Pennsylvania straddle the line between central / southern Appalachia and the cooler climes of the north country peaks.

A Migration Corridor in Need of Federal Designation

“The Broadwing is dive bombing the Red Tail!” cried an enthusiastic young volunteer as she looked through a pair of binoculars at Pennsylvania’s internationally renowned Hawk Mountain Sanctuary.

On a recent afternoon trip to Hawk Mountain, gazing out from the South Lookout at the forests below and a broad swath of white amid the trees known as the River of Rocks, I was treated, along with other visitors enjoying a Mother’s Day hike, to the site of a Broad-winged Hawk and a Red-tailed Hawk locked in a battle for territory amid the usual Turkey Vultures gliding between the mountains.

Autumn is generally the best time to see annual hawk migrations in the sanctuary. Each year draws close to 70,000 visitors to witness the event.

Organizers of the Kittatinny-Shawangunk—the name of the migration corridor where the hawks and other species travel—National Raptor Migration Corridor Project are hoping these unique wildlife interactions will ultimately convince U.S. Secretary of the Interior Ken Salazar to give the corridor federal designation. From an ecotourism standpoint, the designation would not only be a boon for raptor conservation efforts, but it would strengthen the local economy.

“Any designation would make the locations along the corridor something viewed as more attractive to visitors,” said Dr. Keith Bildstein, Hawk Mountain’s Sanctuary Director of Conservation Science.

Hawk Mountain is just one of a number of locations along the migration corridor that stretches up to the Mohonk Preserve in New York State. According to John Rogers, Principal of the Keystone Conservation Trust, the eastern edge of the Pennsylvania Appalachian range generates $460 million in recreational activities per year. 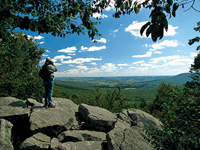 “Forty-two percent of Berks is still in woodlands, so it’s a rich resource from a recreation standpoint,” Rogers said. “The higher quality the resource has, the higher its value as a destination.”

Hawk Mountain is already seeing the benefits of conservation efforts in the increased numbers of hawk species reported in 2010, an above-average 20,498 birds of prey, according to a press release. But the second goal in these efforts towards attaining federal designation is to preserve and boost that local economy.

Rogers says there has been something of a flaw in economic prioritization in the area—business developers believe the land is valuable only if it is developed.

“But we should only develop if there is a clear value,” he said. “We’ve lost a lot of important areas without realizing it.”

Rogers recently conducted an economic assessment of the area and concluded that 50 percent of people surveyed were planning to increase their outdoors use, and kids are exhibiting more interest in outdoor activities. Preserving the sanctuary as part of the Migration Corridor initiative could greatly help and expand business in the area connected with outdoor recreation.

“If Hawk Mountain became developed, it would lose its value,” Rogers said.

Superfund Sites Not So Super

By Jillian Randel
Pennsylvania has one of the highest concentrations of superfund sites in the country. Superfund sites are abandoned places where hazardous waste has been located and then designated for cleanup and remediation effort. Many of the sites have caused negative impacts on human and environmental health. A result of heavy industrial practices, superfund sites are the cause of groundwater leaching of toxic metals and high rates of cancer and other related diseases. For more info: epa.gov/superfund/sites.

Take a Walk on the North Side

The North Country Trail was designed to weave in and out of national parks and wilderness trails across the northern U.S. In northwestern Pennsylvania, the trail passes through the Allegheny National Forest, and Heart’s Content Scenic Area, a unique old growth forest.

As the trail dips down into Ohio, following the state’s southern border and gliding back up along the western border, hikers have the opportunity to pass through the Wayne National Forest, which covers over a quarter million acres of Appalachian foothills and has over 300 miles of trails for hiking, mountain biking and horseback riding.

The North Country trail also encompasses parts of Ohio’s famous Buckeye Trail—a 1,445 mile trail that follows the entire outer edge of the state. The trail has many shorter section hikes that are great for day or weekend hikes.

Few people have thru-hiked The North Country Trail, but many folks, attracted by the accessible camp spots and vast outdoor recreation options, are drawn to use sections of the trail. Visit: northcountrytrail.org.

Meigs County, Ohio, is home to 18 coal-fired power plants—the second largest concentration of coal ash ponds in the country. Community members report that coal ash lines their yards, porches, windowsills, cars and entire communities. The county suffers from some of the highest respiratory and cancer rates in the state. Visit: sierraclub.org/coal/coalash.