Keeping a National Landmark from Being Loved to Death 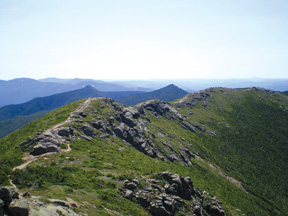 The Franconia Ridge on the New Hampshire section of the AT. Photo by Paul Rago, used by permission under the GNU Free Documentation License


This winter, as three million enthusiasts check their gear and prepare for spring on the Appalachian Trail, they’ll be happy to know that more protection and an expanded trail network are on the way.

Also on the way is a better understanding of the trail’s problems through the AT Mega-Transect project.

These are only a few of the things that are needed, experts say, to keep the beloved trail from being loved to death.

Legislation protecting 53,000 acres of land alongside the Appalachian Trail in southwestern Virginia passed the U.S. Senate in January 2009 and was expected to pass the House.
The land would be accessible for hiking, hunting, fishing and other recreational use, but is protected from development. The legislation was first introduced in 2004.

Many walking trail expansions are shovel-ready, and would be a welcome part of the economic stimulus package, according to Greenways Incorporated founder Charles Flink. Writing recently in the Raleigh News & Observer, Flink said that many trail and greenway projects could be developed quickly.

Such projects “would provide jobs in construction and in the manufacturing of materials such as concrete, asphalt, bridges, boardwalks, signs, hand tools and heavy equipment.” One major suggestion is the Mountains-to-Sea Trail across North Carolina, a 1,000-mile walking trail stretching from the Great Smoky Mountains to Jockey’s Ridge State Park on the Outer Banks.
More walking trails would also provide work along the Civilian Conservation Corps model introduced by President Franklin D. Roosevelt 75 years ago.

Because the Appalachian Trail is so close to 120 million Americans on the East Coast, it is an ideal indicator for environmental problems, according to managers of a collaborative project called the AT Mega-Transect.

For example, AT thru-hikers are currently exposed to high levels of ozone for weeks at a time, and backcountry rangers in Great Smoky Mountains National Park are not allowed to go in the field on high ozone days, the Appalachian Trail Conservancy said, describing the need for the project.

Additional help is needed to monitor birds and other wildlife along the trail. The ATC notes that up to 2,000 endangered species are found along the trail from Maine to Georgia.
The term “mega-transect” was coined by Michael Fay of National Geographic to describe a way to examine a suite of environmental variables on a continental scale. A consortium of groups, including the National Park Service, the U.S. Geological Survey, the ATC and others serve on the AT Mega-Transect project.

“Because of the magnitude of the project, volunteer engagement is vital to this effort,” a recent Mega-Transect report said. “Citizen scientists will play an active role, participating in monitoring activities and providing policy-makers, scientists and land managers with the data needed to further protect the Trail.”