Energy Savings for the High Country 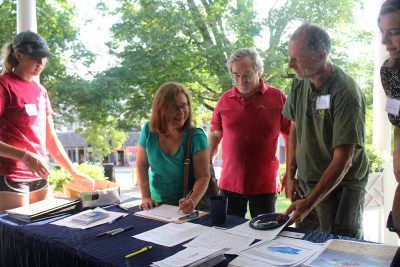 The High Country region of Western North Carolina is served by two electric membership cooperatives — Blue Ridge Electric and Mountain Electric — and one municipal-owned utility in the town of Boone, New River Light & Power. Appalachian Voices is promoting energy efficiency on a community level and working to expand access to low-cost financing for home energy improvements throughout the service areas of all three utilities.

We’ve made this commitment because many residents throughout the region are do not have the money to pay for energy efficiency upgrades or do not qualify for traditional loans, yet struggle with high energy bills due to living in homes with poor insulation, older appliances and other inefficiencies.

Interest in on-bill finance programs is growing among electric co-ops across the state, partly as a result of our community outreach in the High Country and our work with partners statewide. For instance, Roanoke Electric Cooperative, a small community-oriented co-op serving eastern North Carolina, launched its Upgrade to $ave program in early 2015 and has been extremely successful so far.

We carried out a successful two-year campaign that involved a strong community outreach effort, including our 2014 High Country Home Energy Makeover Contest, through which three families received substantial home energy efficiency improvements, resulting in a 15-30% savings on their energy bills.

We also gathered more than 1,000 signatures from Blue Ridge Electric members and more than 20 letters from local energy efficiency businesses, service organizations and other stakeholders — all supporting the development of an on-bill finance program in the BRE area.

As a result of this outreach and support from the community, as well as numerous discussions with co-op management, BRE announced in early 2016 its pilot Energy SAVER Loan Program. Qualified BRE members can borrow up to $7,500 to make energy efficiency improvements such as insulation, air sealing and heating and cooling system upgrades, and will pay back the loan through a new monthly charge on their electric bill. We applaud the co-op for its leadership, and hope to see the program made permanent and expanded to serve hundreds of families each year, which would not only benefit participating members, but also generate economic benefits for local communities.

If BRE were to provide just 1% of its residential members with $7,500 in home energy improvements over the next five years:

Operated by Appalachian State University, New River Light and Power (NRLP) is a state-owned electric utility serving 6,000 residential customers in Boone, N.C. Given that Boone is a university town, the large majority of housing is rental property, which makes on-bill financing both necessary and ideal for addressing energy waste. It also poses barriers for community buy-in and for making an on-bill finance program cost-effective for a large number of properties.

Appalachian Voices is working with residents and stakeholders to identify ways to overcome those barriers and explore complementary or alternative solutions that will help NRLP and the town of Boone meet their commitment to achieving 100% clean energy by 2050.