Like other states in the Southeast, Virginia has a utility monopoly problem. For every resident of Virginia, where they live determines what corporate or local utility will provide their electric service. This lack of choice perpetuates inequality by contributing to climate change, imposing burdensome electric rates on members or customers, and preventing them from participating in critical decision-making.

For starters, Appalachian Power Company, Dominion Energy and Old Dominion Power have state-sanctioned control over a defined service territory and don’t have to compete for their customers’ business. This captive customer base means that the utilities worry less about keeping costs competitive or maintaining customer satisfaction around the type of power they generate. As a result, customers of these three utilities buy some of the most polluting electricity in the country, and pay some of the highest bills for the “privilege” of doing so.

Member-owned electric cooperatives and locally-controlled city, or municipal, utilities in Virginia also operate like monopolies, although they’re supposed to function more democratically by involving community members in their governance. Many of these electric utilities engage in undemocratic, manipulative practices that result in a lack of transparency. Other utilities are satisfied to rely on outdated and polluting fuels like coal and fracked gas rather than affordable and renewable energy.

Since most folks simply aren’t able to live “off-grid,” monopoly utilities leave people in Virginia with little say over where and how power is produced. But each of us should be able to choose renewable energy — and it should be affordable for everyone to do so. 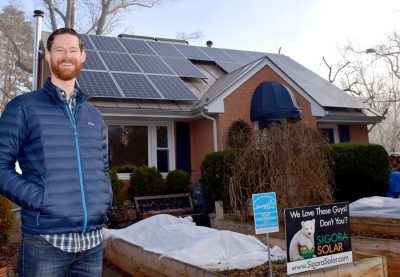 Solutions for these challenges!

The good news is that a more just energy system is possible. Appalachian Voices, our many allies and partners across the state and people like you are working together to:

Talking with residents in Charlottesville, Va., during our 2019 Energy Democracy tour

Energy Democracy is the next step for Virginia

While electricity is such a fundamental part of modern life, few people spend time thinking about where it comes from or how it’s made. Most of us worry more about how much our monthly electric bills are.

In 2019, our team began an ambitious campaign to build citizen power across Virginia. We believe that citizen engagement starts with citizen empowerment. And as the old adage goes — knowledge is power. That’s why education and outreach are vital components of our work.

Appalachian Voices is working with citizens and partner groups in Virginia to build an environmentally-conscious, justice-minded grassroots movement that includes electric customers in the decision-making process about how their energy is produced and how much that power costs.

During the summer of 2021, we held a series of workshops to showcase where and how communities are fighting for Energy Democracy in the Southeast. Check out recordings from our series to learn what’s working for people from near and far who are striving to develop an energy system that serves the public interest.

Bring Energy Democracy to your community! Email emily@appvoices.org to get involved.