In Tennessee, a coalition of organizations, community groups and citizens are working to bring democracy to the Tennessee Valley Authority energy system and transform it from the bottom up.

Unlike corporate utilities, TVA is owned by the federal government, but taxpayers have little say in how it is run. Decisions like reducing dependency on fossil fuels or increasing renewable energy are made without much input from consumers of TVA’s electricity.

TVA sells the power it generates to a network of local power companies, made up of municipal utilities and rural electric cooperatives, which then distribute it to communities across the state. These public power companies have contracts with TVA that forces them to buy all of their power from TVA, apart from the 3-5% that they are allowed to self-generate under TVA’s new long term agreements.

This lack of local control has impacted communities with increasing costs of energy bills, pollution from continued use of fossil fuels, workers’ rights violations, and a corporate-like refusal to fully implement climate-saving solutions like solar and energy efficiency.

Meanwhile, corporate interests are seeking to privatize TVA, which could result in the loss of high paying union jobs, higher rates in the Valley, and even less community control over our energy system.

The untapped potential of our public power system in the Tennessee Valley goes beyond the problems at TVA. Rural electric cooperatives, which are communally owned by the members the co-op serves, often discourage public participation in their decision making. Community members are standing up to ask for better board representation, open board meetings, community advisory committees and other avenues for members

Community members are standing up to ask for better board representation, open board meetings, community advisory committees and other avenues for members to participate in decision making. By doing this, electric cooperatives could significantly improve quality of life for rural communities throughout the Valley by implementing programs that members need to reduce their bills and access renewable energy options.

Appalachian Voices is working with partner groups in Tennessee to build a powerful, grassroots movement to bring Energy Democracy to the TVA energy system and help communities demand public control over their public power.

With a democratic system, communities can control the decision making around their energy production and use. Impacted communities and workers can make decisions that prioritize local needs, social and environmental impacts. 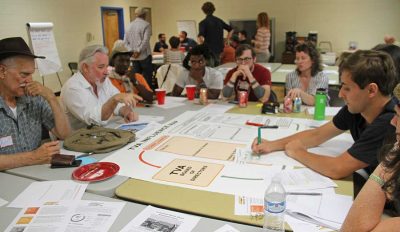 In 2019, we held a series of workshops to gather feedback from communities in the Tennessee Valley. What we learned is that communities and ratepayers want more input on decisions, information to be transparent and accessible, representatives to be present in their communities, and for the utility to be held accountable for its actions.

But corporate interests aren’t going to give up control of TVA without a fight! We need your help to bring this inspiring vision for a democratic energy future into reality.