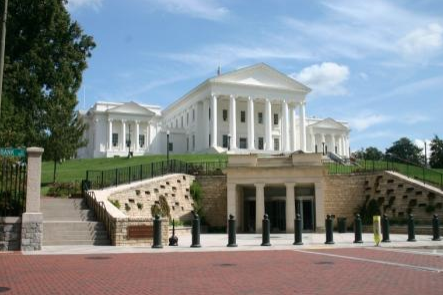 In 2020 and 2021, the Virginia General Assembly championed many of our legislative priorities to help the commonwealth transition to a just, equitable and 100% clean energy economy. However, new dynamics in the legislature placed much of that recent progress under threat during the 2022 legislative session, which officially concluded in mid-June when Gov. Glenn Youngkin signed the much-contested state budget. Over the course of this year’s session, the General Assembly considered a range of bills dealing with environmental justice, solar energy, fracked-gas pipelines, just transition and fairness for electricity ratepayers. 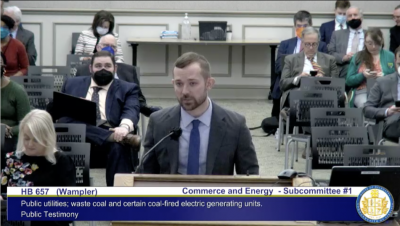 New Economy Program Manager Robert Kell testifies during a hearing in the Virginia House of Delegates.

The powerful fossil fuel lobby used its sway in an attempt to roll back much of the progress made over the past two years to reduce Virginia’s carbon emissions. Several legislators introduced legislation to repeal the landmark Virginia Clean Economy Act (VCEA), and Youngkin sought to appoint the former coal lobbyist and Trump-era EPA administrator, Andrew Wheeler, as the secretary of natural and historic resources. Along with a statewide network of environmental organizations, Appalachian Voices successfully played “defense” against Youngkin’s extremist appointment and against any repeal or weakening of the VCEA.

However, a huge part of the progress Virginia has made since 2020 is still under threat. In January, Youngkin announced his intention to remove Virginia from the Regional Greenhouse Gas Initiative (RGGI), a multi-state program that has already provided millions for energy efficiency programs (including for weatherizing homes) and climate resilience funding (including for flood preparedness projects) for the commonwealth while incentivizing polluters to reduce their carbon emissions.

Help us push back against reversing climate policy! Rally in defense of climate action in Richmond on July 1.

Virginia legislators codified our enrollment in RGGI in 2020 through the ​​Clean Energy and Community Flood Preparedness Act. Unfortunately, the governor is attempting to circumvent the General Assembly by asking the State Air Pollution Control Board to issue an emergency regulation to withdraw Virginia from the program. While the executive branch cannot change a law passed by the General Assembly, any disruption in the program would move us backwards on climate and would risk depriving communities of a powerful funding resource to help them address climate change. To prevent this from happening, Appalachian Voices is working with partners to defend our participation in the regional carbon market.

For decades, monopoly electric utilities in Virginia have taken advantage of their outsized influence over the General Assembly to write a playbook that benefits them. For example, Dominion Energy has escaped standard regulation of an electric monopoly and “legally” overcharged its customers more than $1.2 billion since 2015, thanks in part to the utility’s political power.

In February, state utility regulators forced Dominion to return $330 million of these overcharges to customers, but current state law allowed the utility to pocket the rest!

Electric cooperatives limit oversight from their members (who own the co-op) by holding closed-door board meetings among other opaque practices that conceal decisions made by executive boards, such as spending of member-owner funds on political lobbying. And finally, although each of our electric and gas utilities is supposed to serve the public interest, many have disconnection policies for non-payment that are particularly punitive toward low-income people and that place the elderly, those with medical conditions and others at extreme risk when they can’t afford their bills. 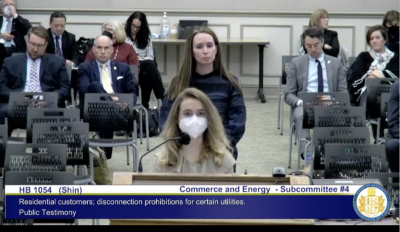 Appalachian Voices and our partners asked lawmakers to restore appropriate regulatory authority of these utilities to the State Corporation Commission and to update and improve disconnection policies to protect vulnerable people. We are thankful for the legislators who sponsored these bills, but unfortunately, each of these bills failed to advance from committee. Appalachian Voices will continue our work to protect customers both in the General Assembly and at the State Corporation Commission. 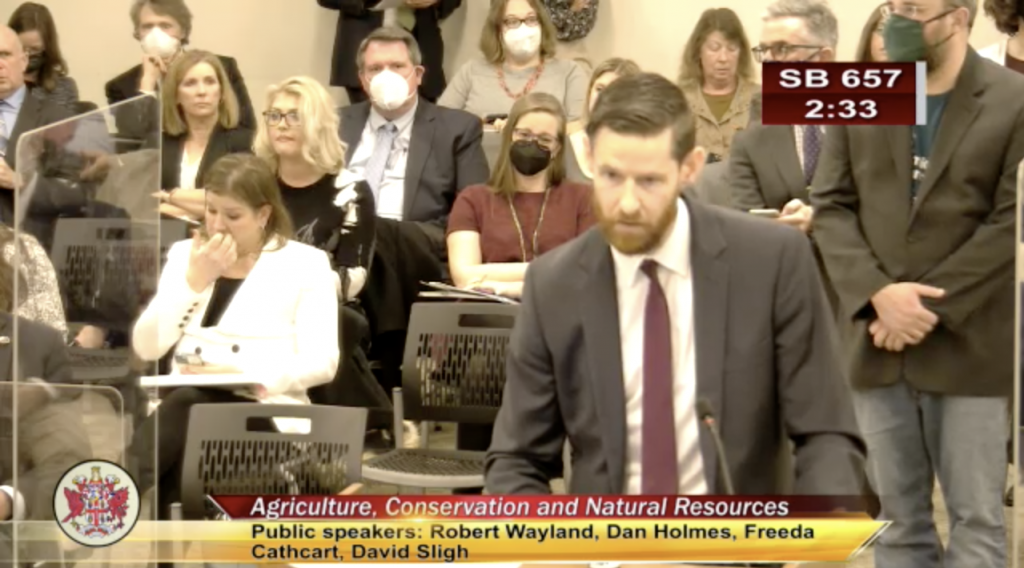 Virginia has many communities impacted by industrial pollution or the threat of proposed projects, including fracked-gas and coal facilities. This session, Appalachian Voices worked on legislation to ensure directly impacted communities — far too often Black, Indigenous, low-income and communities of color — have fair and equal opportunity to be involved in the decisions that impact them. We worked to safeguard public participation opportunities so that these communities have influence over these important decisions.

Unfortunately, with the passage of Senate Bill 657, Virginia’s citizen regulatory boards, which represent the public in important air and water regulatory decisions, were stripped of their authority to grant or deny permits for controversial projects. Beginning July 1, the citizen boards will still decide regulatory changes, but the loss of their other traditional responsibilities reduces meaningful community engagement in the permitting process.

We will continue to advocate for improving opportunities for stringent review of permits, and to remove roadblocks for community participation in decision-making.

This session was busy for coalfield communities. Appalachian Voices led efforts to see investments for economic and community development, to expand access to the state’s shared solar program to regional utilities, and to ensure bills addressing coal waste clean-up centered on environmental and social harms. 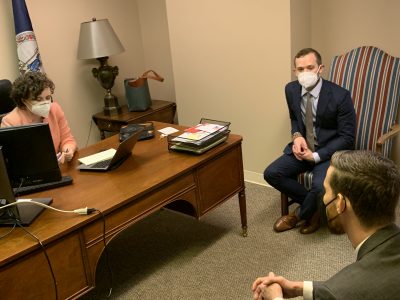 We advocated for budget amendments 115 #9h (Hudson) and 115 #6s (Deeds) to create the Coalfield Community Development Program at the Department of Housing and Community Development and the establishment of the Inter-agency Task Force. Instead of creating a new program, the budget allocated $400,000 of funding to the two coalfield Planning District Commissions. This funding will be used to identify, plan, and support economic development efforts within each Planning District Commission that align with federal funding opportunities, including funding from the Bipartisan Infrastructure Law. Additionally, we were successful in establishing the Coalfield Inter-agency Task Force to explore cross-agency approaches to revitalizing the coalfields. This task force will be housed under the commerce and trade secretary and will work with regional stakeholders to make recommendations to the General Assembly about how to support economic development in Southwest Virginia.

There were also several bills introduced to address the cleanup of coal waste, otherwise known as gob. Delegate Wampler and Senator Hackworth introduced HB 657 and SB 120. In their final form these bills mandate a study by Virginia Energy to “identify the approximate volume and number of waste coal piles present in the coalfield region of the Commonwealth and options for cleaning up such waste coal piles, including the use of waste coal in generation of electricity.” The budget also allocated $250,000 for this study. Other bills that were introduced included HB 656 (Wampler) which would have created tax credits for cleaning up and burning gob (this bill did not advance), and Delegate Kilgore’s HB 1326, which addresses the environmental hazards of abandoned coal mines and declares the removal of waste coal from previously mined sites in the coalfields to be in the public interest.

Virginians know all too well how fracked-gas pipeline projects can wreak havoc on water quality in our streams, rivers, wetlands and drinking water sources. We supported bills that would have strengthened the state’s oversight and enforcement of water quality standards, and defended against attempts to roll back community input and water quality protections. We supported two bills from Del. Willett: HB 393, which would have required consideration of social and economic demographics during antidegradation analysis (part of the permitting process for projects that impact our water) and HB 1228, which would have required baseline data on water quality to be provided to the Department of Environmental Quality before permitting. Although these bills failed to report from committee, community and water resource protection continues to be a high priority for our organization. 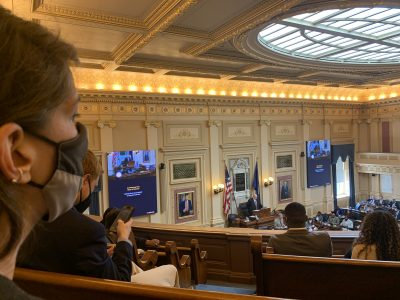 Drinking water resources are imperiled for many communities across the commonwealth, and new interest from the large-scale metals mining industry to set up shop in Virginia brings a new threat. Existing metals mining rules that are nearly a century old and do not address the threats of large-scale mining could put public health and the environment at risk. With the news that prospecting companies are pursuing metals mining such as gold, copper, zinc and lead, we supported analysis of existing regulations and a pause in permitting for those metals while the potential impacts are studied. HB 250 would have addressed these concerns and was sponsored by Del. Shelly Simonds and co-sponsored by Del. James Edmunds, but it did not report out of committee. The issue remains top of mind for Appalachian Voices. There is potential the industry could negatively impact the water resources of those living along the Gold-Pyrite Belt, which stretches from Fairfax to Halifax, and those living downstream, in the eastern part of Virginia.

Appalachian Voices worked with many solar partners to expand access to the state’s shared solar program to Appalachian Power and Old Dominion Power utility territories. Shared solar is currently only being developed for customers of Dominion Energy. Delegate Wilt introduced HB 832 and Senator Hanger introduced SB 659 and SB 660. Ultimately, Wilt’s bill did not advance, but Senator Hanger’s modified bill will initiate a stakeholder process to evaluate the expansion of shared solar in these utility territories.

While we faced challenges and disappointments at the General Assembly this year, we also held our ground on many hard-won important environmental protections enacted over the past few years and continued to develop the framework for a just energy transition in the coalfields region. Appalachian Voices remains committed to ensuring a clean and healthy environment for all Virginians. We are grateful for your involvement in the shared work of advocating for our communities, and we hope you’ll continue to support us in years to come.

To help us make positive change in Virginia, please consider becoming a member of Appalachian Voices. You can also join our email list to stay informed about opportunities to speak out!