The Supreme Court decision is bad, but there’s still a lot we can do to fight climate change

The court’s decision puts constraints on how the agency can limit carbon dioxide emissions from power plants. As Justice Elena Kagan wrote in her dissent, “Whatever else this Court may know about, it does not have a clue about how to address climate change. And let’s say the obvious: The stakes here are high. Yet the Court today prevents congressionally authorized agency action to curb power plants’ carbon dioxide emissions.”

But the West Virginia v. EPA ruling does not prevent the EPA from taking action on climate or regulating power plants. The Biden administration still has many tools they can and should use to protect our planet. Congress can also still pass laws to curb greenhouse gas emissions and encourage renewables, like the climate and clean energy investments that are part of the pending budget deal. And with the congressional August recess looming, they have a short window to act!

Tell your senator to get a strong climate bill done!

The decision also doesn’t stop states, towns and utilities from tackling the climate crisis. So it’s time to get to work!

Jump to other ways to get involved

“The Clean Air Act is a common-sense, bipartisan law intended to protect our air from becoming a dumping ground for corporate polluters. By restricting how the EPA can address climate-altering carbon emissions under the Clean Air Act, this Supreme Court ruling endangers all of us and future generations, and the harm will be felt most acutely in communities that are already disadvantaged. It’s critical for the Biden administration to use the full scope of its authority to combat climate change and for states and public utilities to hold up their end of the responsibility to limit harmful and climate-damaging carbon dioxide pollution.”
— Appalachian Voices Executive Director Tom Cormons

“Today’s decision underscores the need for strong state and utility policies along with federal actions to reduce carbon emissions, but public pressure is urgently needed to make sure these states and utilities do the right thing. In Virginia, Gov. Youngkin is currently looking to undo the commonwealth’s commitment to capping carbon emissions and funding energy efficiency and flood prevention programs by leaving the Regional Greenhouse Gas Initiative. In North Carolina, Duke Energy’s recently proposed carbon plan is insufficient for addressing climate change in a timely manner as it leans too heavily on polluting methane gas and doesn’t capture the benefits of distributed renewables such as rooftop solar. Meanwhile, the federally-owned Tennessee Valley Authority is planning the second-largest methane gas buildout of any utility in the nation.”
— Appalachian Voices Senior Energy Analyst Rory McIlmoil

What you can do

Congress and the Biden administration still have the ability to act on climate, and it’s essential that they act boldly. In addition, local and state-level efforts to protect our air and advance affordable, equitable renewable energy are more important than ever. Here are some ways you can get involved!

Tell Congress to act on the budget deal!

July is the make-or-break moment for one of the best opportunities we have to act on climate — the budget deal that Senate Democrats are currently negotiating. If you have a Democratic senator, tell them to pass a strong climate and clean energy jobs bill!

And wherever you live, you can also email Senate and House leadership to let them know that they need to take action and pass a budget deal that includes climate and clean energy investments — contact Sen. Majority Leader Chuck Schumer and House Speaker Nancy Pelosi.

If completed, the fracked-gas Mountain Valley Pipeline would emit 90 million metric tons of greenhouse gas into the atmosphere each year. That’s the equivalent of 23 coal-fired power plants, and that’s in addition to the MVP’s harm to communities, waterways, farms, endangered species and protected forests.

MVP developers just requested a four-year extension from the Federal Energy Regulatory Commission. Tell FERC that MVP doesn’t deserve a new pass to harm Appalachia and wreck our climate. Join us July 7 for an online comment party to learn more and submit your comment!

North Carolina is at a critical juncture as we map our transition to a clean energy future. The North Carolina Utilities Commission is holding public hearings across the state in July and August so residents can participate in developing a plan to reduce carbon dioxide emissions by 70% before 2030. Join us and partner organizations to demand a clean energy future for the Tar Heel State!

Tennessee is at a key energy crossroads. The federally-owned Tennessee Valley Authority is retiring two of its biggest coal plants but wants to replace them with fracked gas — another greenhouse gas-emitting fossil fuel! TVA also wants to build over 150 miles of pipelines that cut through private property to deliver gas to the plants. It doesn’t have to be this way. TVA could instead create more long-term jobs with renewable energy and storage.

The Federal Energy Regulatory Commission will soon be reviewing applications from two pipeline companies to develop fossil fuel infrastructure to deliver methane gas to TVA’s proposed gas plants. FERC needs to hear from people like you who believe in a clean energy future in Tennessee.

Tell FERC to deny the applications for the pipeline projects! 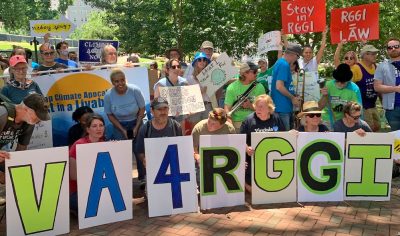 Virginians marched at the capitol on July 1 to call on Gov. Youngkin to keep the state in the Regional Greenhouse Gas Initiative. Photo by Jen Lawhorne

Gov. Youngkin plans to remove Virginia from the Regional Greenhouse Gas Initiative (RGGI), a program to reduce carbon emissions from the energy sector.

We can’t allow the Youngkin administration to sidestep what Virginia has enacted into law — a program that forces polluters to pay. RGGI has already funneled millions of dollars into energy efficiency and flood prevention programs while incentivizing polluters to cut carbon emissions. To join our volunteer Energy Democracy Action Team, email Virginia Energy Democracy Field Coordinator Emily Piontek at emily[at]appvoices.org. You can also sign up to stay in the loop about ways to defend Virginia’s environmental progress.