EDITOR’S NOTE: The week of May 5, Dominion Energy and Duke Energy held their annual stakeholders meetings. Our NC Field Coordinator breaks down the barriers to the pipeline and the devastating impacts it would have as the two energy giants move forward with their plans for the future — and the implications of only considering stakeholder interest as they do. 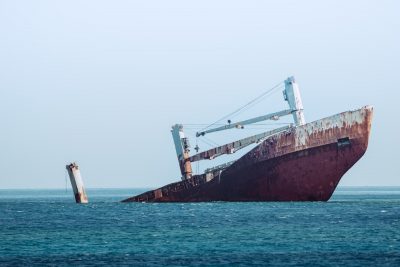 This week, Dominion Energy and Duke Energy will have their annual shareholder meetings for 2020 — Dominion tomorrow and Duke on Thursday. While the companies tend to use these meetings to tout grand plans for growth and paint glowing pictures of future earnings, this year the elephant in the room will be the Atlantic Coast Pipeline.

The massive fracked-gas project that would run 600 miles through West Virginia, Virginia and North Carolina is several years behind schedule, 100% over budget and mired in legal battles. The project has never been more vulnerable than it is now.

Dominion and Duke are the primary companies behind the Atlantic Coast Pipeline (ACP), with Dominion taking the lead on project development. The ACP, whose projected cost currently stands at a whopping $8 billion, is in the middle of a perfect storm of unfavorable political, economic and regulatory forces.

It is high time for Dominion and Duke to abandon this project for the good of their customers, the communities harmed by the project, the environment and the climate. Shareholders should be concerned, too.

The VCEA sets a mandatory target of 100% renewable energy sales by 2050 and incentivizes significant investment in energy storage and renewable energy generation from the commonwealth’s two largest utilities, Dominion and Appalachian Power. The law calls for all carbon-emitting power plants operated by these utilities to be shut down by 2045, and it requires regulators to consider the social cost of carbon emissions when evaluating utility proposals for new power plants.

Just two years ago, in its 2018 Integrated Resource Plan, Dominion called for the addition of eight new natural gas-powered facilities which would have added approximately 3,600 megawatts of electricity generating capacity by 2033. The commission rejected the plan, saying Dominion’s forecasts of electricity demand “have been consistently overstated, particularly in years since 2012, with high growth expectations despite generally flat actual results each year.” By contrast, PJM Interconnection, the grid operator for Dominion’s service territory, forecast that load growth would be relatively flat through 2032.

This March, as the VCEA passed the legislature, Dominion was reading the writing on the wall. In a filing with the State Corporation Commission, Dominion said that “significant build-out of natural gas generation facilities is not currently viable with the passage by the General Assembly of the Virginia Clean Economy Act.”

The bill passed unanimously, a clear sign that lawmakers want to ensure that customers only have to pay for a project they would benefit from, and are questioning whether pipelines such as the ACP are an essential part of our energy future.

These new laws represent immense obstacles for Dominion to overcome in order to justify the Atlantic Coast Pipeline, or any new gas infrastructure, to the State Corporation Commission. Dominion owns 53% of the project overall, plus its Virginia affiliate company has contracted for 20% of the pipeline’s capacity for the next 20 years. If it can’t justify passing the cost of the ACP onto its captive ratepayers (who have no choice but to pay their electric bill), Dominion’s shareholders should be concerned that they may be on the hook for hundreds of millions of dollars, possibly more, without being able to recoup that investment.

And although these political barriers primarily impact Dominion, how should ratepayers of Duke Energy in North Carolina feel about potentially being left with the check while ratepayers in Virginia are protected?

When the Atlantic Coast Pipeline was announced in 2014, the economic landscape for natural gas was vastly different. In the years that this project has lumbered along, supply has dwarfed domestic and international demand.

According to a new report from the International Energy Agency in April, “Global energy demand could plunge 6% this year, including a 5% drop for natural gas, marking the steepest declines in 70 years.”

Dominion insists the ACP will be operational in two years, yet the market may be in an even more unfavorable condition than it is currently. From the project’s inception, economic experts were signaling caution about an overbuild of natural gas infrastructure, noting that existing pipelines would be sufficient, with some minor upgrades. 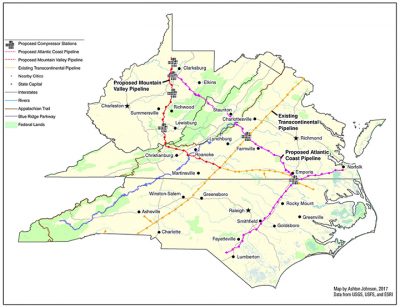 In fact, the Williams Transcontinental pipeline, commonly known as Transco, which supplies the natural gas to the entire east coast including North Carolina and Virginia, has increased its daily delivery capacity by roughly 25% over the past three years.

While Duke Energy in North Carolina has modified two coal-fired power plants, the Rogers Energy Complex and the Belews Creek Steam Station, to alternate between coal and natural gas, and built a small gas plant at the site of its retired Asheville coal plant, these new projects are already connected to the Transco pipeline and additional capacity is not needed.

It’s unlikely the Atlantic Coast Pipeline would be the lowest cost option compared to what is already available and in use. And although the builders of the ACP claim that the gas it would move is not intended for export, if gas shippers look to export to international markets, they may realize that demand abroad can be satisfied more cheaply.

Yet, even if the economic conditions were more favorable, or if Dominion was able to find workarounds to the legislative barriers preventing infrastructure expansion and cost recovery, the regulatory outlook for the ACP is increasingly grim.

In late February, the U.S. Supreme Court heard oral arguments on whether the U.S. Forest Service has the authority to grant a right-of-way to the pipeline to cross underneath the Appalachian Trail. A lot of attention was rightly given to this battle; if the company loses, it would mean a significant reroute and further permitting uncertainty. If the court sides with Dominion, one can expect the company to herald it as a major victory. It is not. The pipeline will have to go through the whole process of getting a new Forest Service permit, and it would still be lacking seven other required permits.

Four of those missing permits were issued by the Corps of Engineers under the “Nationwide 12” permit, the agency’s one-size-fits-all authorization for pipelines and other utilities that cross streams, rivers, wetlands and other waters of the United States. The ACP would cross through four of the Corps’ district offices — Huntington, Pittsburgh, Norfolk, Wilmington — hence the four permits. Without them, the Atlantic Coast Pipeline does not have permission to proceed with any of the more than 1,600 water crossings along its 600 mile route.

On April 15, in a ruling that reverberated around the country, the Montana federal district court vacated the Nationwide 12 permit in a case involving the Keystone XL Pipeline. It found that the Corps, when it reissued its nationwide permit in 2017, had failed to consult with the U.S. Fish and Wildlife Service as required by the Endangered Species Act. Due to this court ruling, the Nationwide 12 permit is currently not valid and the Corps may not authorize work under the terms and conditions of the permit.

According to the National Law Review, the Corps could reopen consultation with the Fish and Wildlife Service, which would take several months or longer to complete and, once completed, the permit may be subject to further litigation. Two weeks after the ruling, the Corps asked the court for expedited briefing and a partial stay, but that motion was denied.

The ACP is also missing an air permit for its proposed compressor station in Buckingham County, Va., and a Special Use Permit for construction and tree felling in the George Washington and Monongahela national forests.

The last permit that the project is missing is the biological opinion and incidental take statement that is granted by the Fish and Wildlife Service. This permit limits the number of endangered and threatened species and critical habitats that can be harmed during construction. In July 2019, for the second time, the 4th Circuit Court of Appeals vacated the agency’s biological opinion for the ACP on the grounds that its “decisions were arbitrary and would jeopardize the Rusty Patched Bumble Bee and other endangered species.”

Investment banking firm Morgan Stanley said in a 2019 report that “Atlantic Coast will likely not be completed given the Fourth Circuit’s likely (in the bank’s view) rejection, for the third time, of a newly issued Biological Opinion and Incidental Take Statement.” And in a recent natural gas investor webinar panel (listen to the recording starting at minute 37), the Managing Director and Head of North American Equity Research in Power, Utilities and Clean Tech for Morgan Stanley, Stephen Byrd, said that just based on the likelihood of a third rejection, the firm “has written off the project entirely.” Byrd goes on to say that the Atlantic Coast Pipeline is “a fairly significant investment and that’s caused real dilution to the earnings per share power for Dominion as a result.” Given delays due to the Covid-19 pandemic, it’s anyone’s guess when the agency will issue a third rewrite of this critical permit.

Despite Dominion’s constant messaging that the project meets all environmental standards, these legal setbacks are much more than temporary snags. Combined, they represent Dominion’s (and Duke’s) utter failure to bring this project to fruition within the current regulatory framework for protecting water, air and wildlife.

Dominion and Duke have gotten themselves into rough waters. Try as they might, they have never been able to justify the tremendous environmental and social costs of the ACP — nor the project’s economic burden on customers — to regulators or the courts.

At this point the companies cannot justify the project to their shareholders either. Hoping that the storm will pass and that the pipeline will move forward is reckless. The required permits may never be granted, the investment may never be recouped, and the demand may never return. Now is the time for these companies to abandon ship. Now is the time to cancel the Atlantic Coast Pipeline.