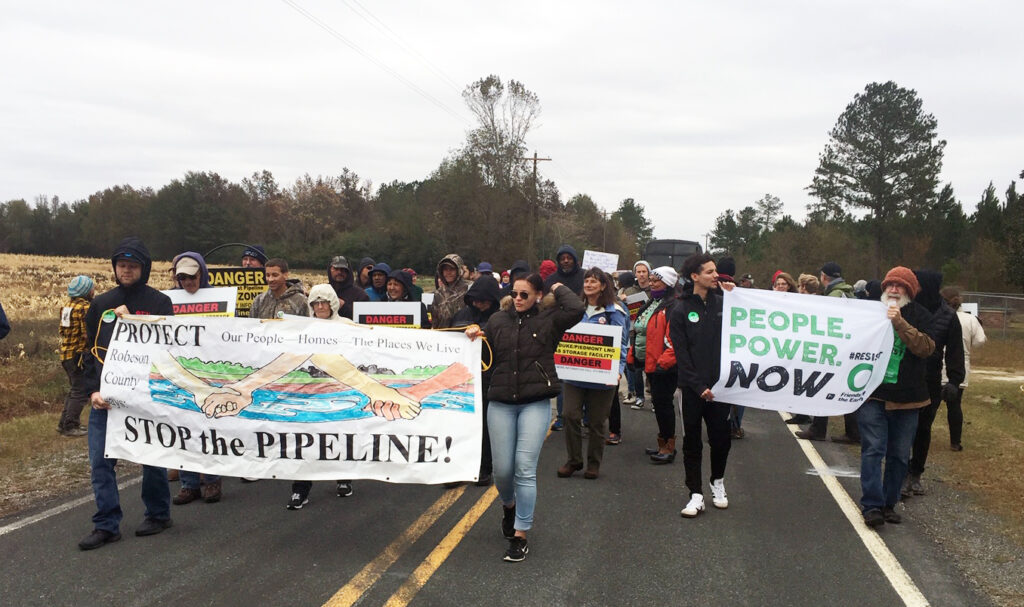 Last Saturday, North Carolinians held a “March for Justice” in Robeson County to protest a proposed Liquefied Natural Gas (LNG) facility that Piedmont Natural Gas wants to build within one mile of an elementary school with 95% students of color, primarily Native American. The facility would be a source of hazardous air pollutants like benzene. In a separate but related project, Piedmont wants to build two side-by-side, 5-mile long pipelines connecting the facility and existing infrastructure; the pipelines would cross wetlands and waterbodies and impact several families along the route.

The projects raise clear and compelling environmental justice concerns. In addition, there are several alarming regulatory oversights. Piedmont — a subsidiary of Duke Energy — withdrew its air quality permit application to the N.C. Department of Environmental Quality for the LNG facility back in April, dubiously citing a regulatory exception for gas-powered heaters. And the company has not applied for a water quality permit for the pipelines, despite being on land that regularly floods and is situated between two tributaries of the Lumbee River, a nationally designated “Wild and Scenic River” and the drinking water source for thousands of people.

Piedmont’s environmental track record with such projects has not been stellar. Under orders from the DEQ, the company spent a decade digging up contaminated soil at its LNG facility in Huntersville, N.C. The groundwater is still contaminated at that location.

After the march, citizens held a “Celebration of Our Sacred Lands and Waters” at Oxendine Elementary School. More than 20 organizations, including Appalachian Voices, co-sponsored the event and more than 100 people came from across the state to hear local organizers and landowners who live along the route of the proposed pipelines speak about the impacts to the nearby community. 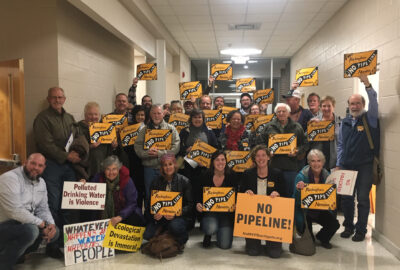 Residents gather at a DEQ public hearing to oppose a water permit for the proposed MVP Southgate pipeline. Photo by Ridge Graham

Help stop the MVP Southgate pipeline.
Sign onto these comments to the DEQ to reject the water quality permit for the project.

More than 50 people came to the meeting and 17 spoke out against the pipeline.

“My family has been farming this land for over eight generations and it’s shameful that polluting corporations can take control of it to line their pockets,” said Perry Slade, a farmer in Alamance County and impacted landowner along the pipeline proposed route. “The fracked-gas Mountain Valley Pipeline is dirty, dangerous and a threat to my life and livelihood that isn’t even needed.”

Mountain Valley Pipeline, LLC states that the need for this extension is tied to future growth and increased demand. Studies have shown that demand for natural gas will remain flat through 2034. The pipeline’s stated purpose and its evidence of need is based on misconstrued projections.

“This pipeline would result in extensive and long-lasting impacts to streams, rivers, and wetlands in the Haw River watershed. In their own comments to the Federal Energy Regulatory Commission, NCDEQ questioned the need for this project. Our watershed and communities who depend on this watershed for water supply and recreation need to be prioritized and protected,” sais Haw Riverkeeper Emily Sutton.

“By denying the water quality certification of the MVP, the Department of Environmental Quality can prevent further destruction of our communities, health and waterways. People all along the Haw River basin are saying loud and clear, we don’t want this project.”