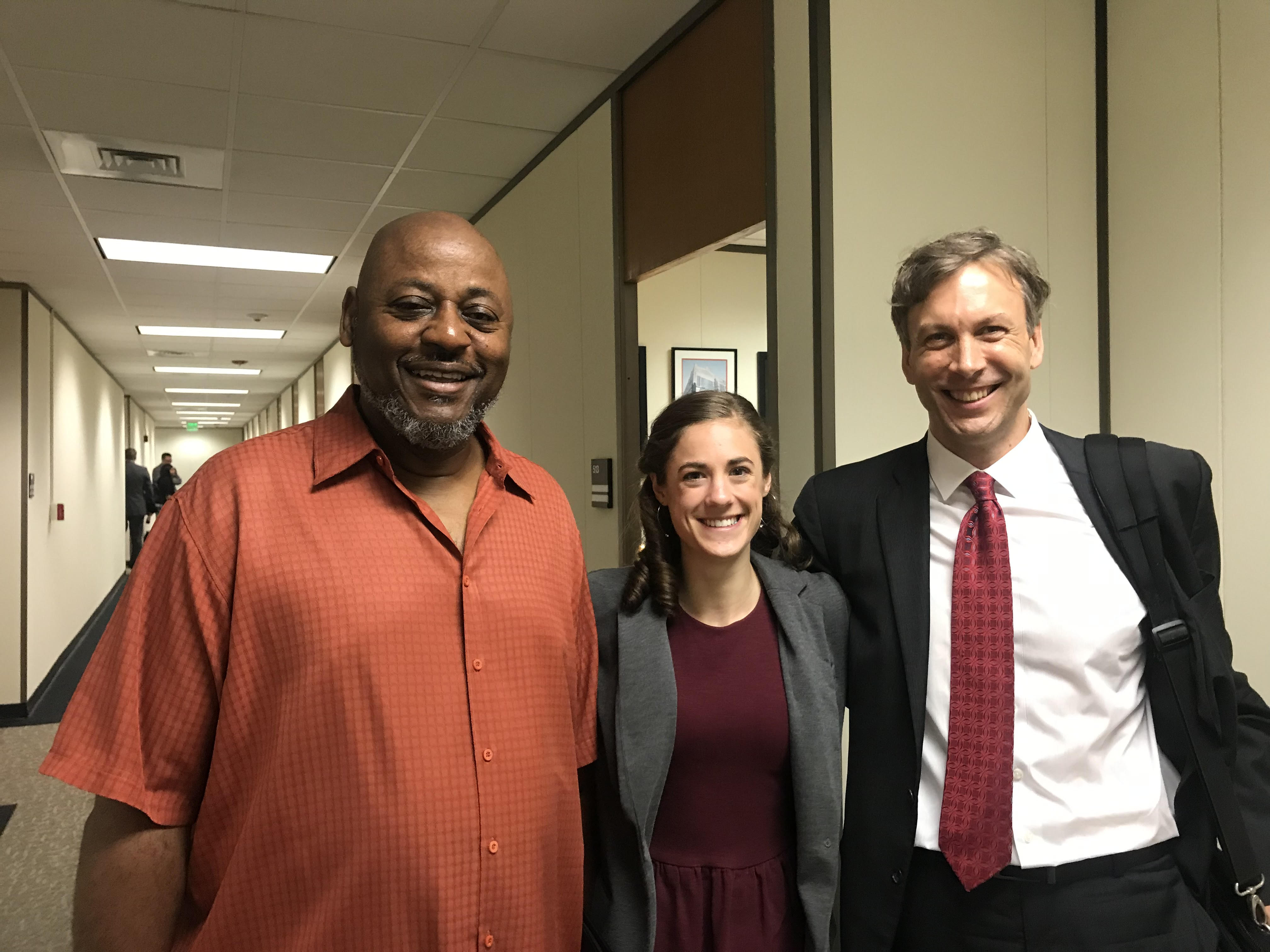 Energy Justice NC sponsored a lobbying day in May that attracted more than 40 participants to speak out against S.B.559. From left to right: Bobby Jones with the Down East Coal Ash Coalition, Catherine Trusky with the Alliance for Climate Education, and Matt Wasson with Appalachian Voices.

Appalachian Voices and our partners with the Energy Justice North Carolina — End the Duke Monopoly Coalition won a months-long battle against Duke Energy’s corporate influence in the state legislature in October.

The N.C. Senate and House of Representatives both voted unanimously to pass a revised version of Senate Bill 559 without an unnecessary and bad faith provision Duke was pushing for that would have allowed the monopoly utility to line their pockets by enacting multi-year rate hikes with little to no public oversight.

N.C. Sen. Phil Rabon, stating that he recognized the House was not going to act on the bill, withdrew Duke’s preferred version on Oct. 29 and replaced it with one that only addressed how to finance storm recovery costs and left out the provisions that Duke wanted the most — but which would have resulted in the greatest risk and increased costs for Duke’s ratepayers. The bill now goes to Gov. Cooper who has signaled in the past he would likely sign a bill that excluded the controversial rate provisions.

Energy Justice N.C. and Appalachian Voices, alongside other environmental and clean energy advocates, consumer protection groups, and commercial and industrial stakeholders, fought hard against the bill since it was introduced in early April. These stakeholders contended that the ratemaking and return-on-equity provisions would result in billions of dollars in excess profits for Duke Energy — and extra costs for ratepayers — over the next decade with less accountability for Duke’s expenses, including coal ash cleanup costs and what the monopoly utility is claiming to be “grid improvement” investments.

“While it took nearly seven months for our elected leaders to do the right thing and reject Duke’s attempts to fleece North Carolina’s families and businesses, this is how our democratic process is supposed to work,” said Appalachian Voices’ Senior Energy Analyst Rory McIlmoil. “We hope that exposing the legislators who allowed Duke’s campaign donations to supercede the public interest leads to an abolishment of laws that allow the electric monopoly to write its own rules and buy support for bills like Senate Bill 559 that favor company profits over ratepayers pocketbooks.”

Bobby Jones with the Down East Coal Ash Coalition, a member group of Energy Justice N.C., stated that this fight was a “David vs. Goliath scenario” from the very beginning.

“We, the ratepayers of North Carolina, had everything to lose and Duke Energy, the state electric energy monopoly with deep pockets, had everything to gain,” said Jones. “Duke has a history of buying legislation and legislators, but by God’s grace, we the people were able to find a shiny stone called Energy Justice North Carolina, with over fourteen environmental justice organizations, and we were able to stave off this attempt to harm the ratepayers of North Carolina.

“And to the people of Goldsboro, Wayne County and eastern North Carolina, especially the black, brown and poor white, it is important that you remember the sponsor of the original harmful SB559 was our own Representative John Bell and Senator Dan Blue,” Jones continued. “ Lest we forget!”