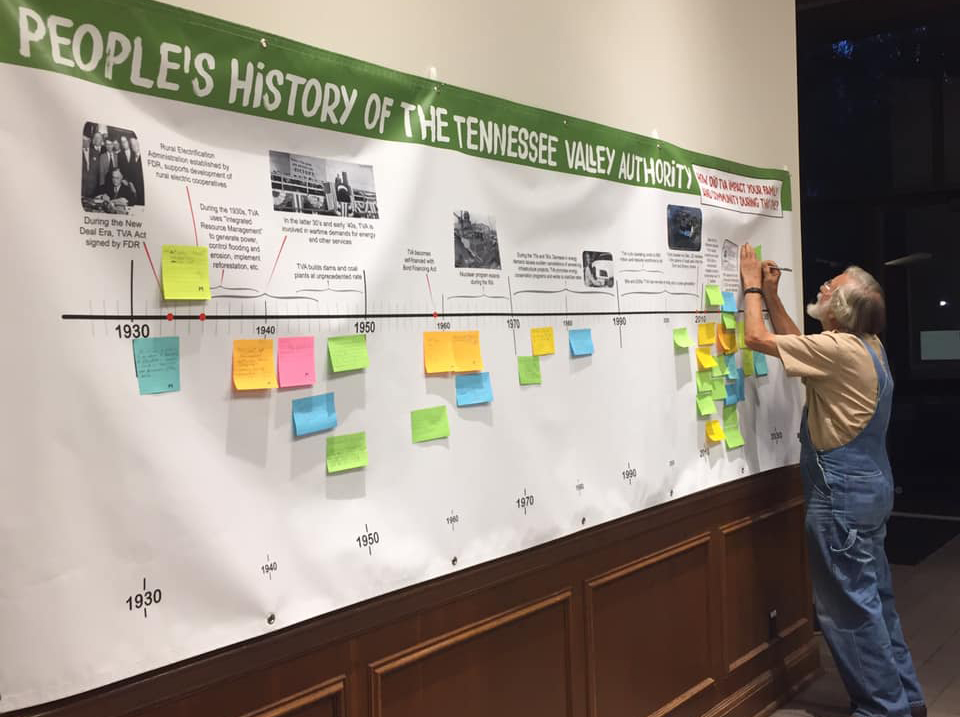 The 2019 Tennessee Valley Energy Democracy Tour is a listening project organized by Appalachian Voices, Science for the People, SOCM, Working Films, and a group of community members and organizers in the greater Knoxville area. Our goal with this project is to begin building a collective, grassroots vision for our energy future by reaching out to communities impacted by the Tennessee Valley Authority and asking them what they want. 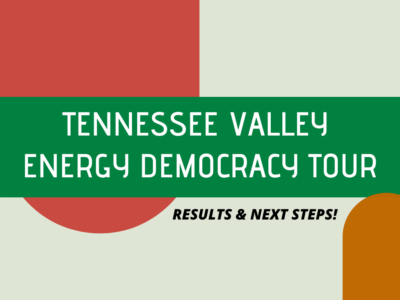 This is what we heard–Communities in the Tennessee Valley want our public power system to:

Learn more about what participants had to say in the results section below. 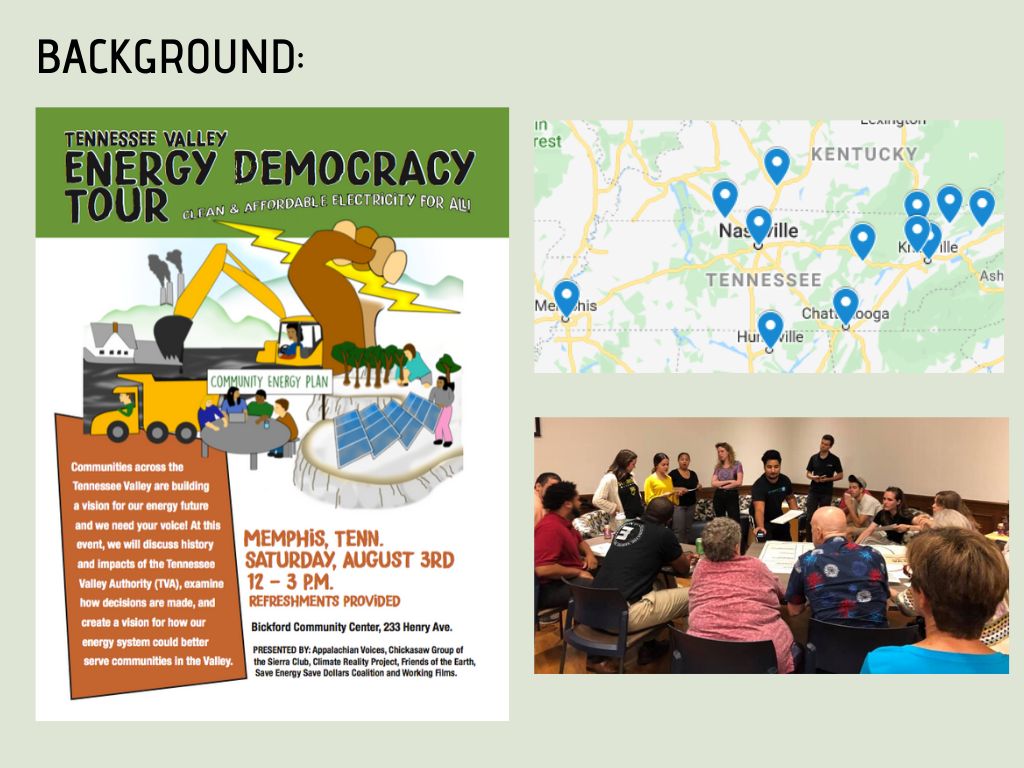 During the fall tour, we visited twelve communities (both urban and rural) with the help of more than 20 organizations, community groups and local power companies who served as site co-hosts. Our co-hosts provided a big lift by identifying event locations, generating turnout and facilitating breakout groups.

What motivated this listening project?

TVA is a federal public utility that provides power to Tennessee and parts of six surrounding states. TVA sells that power at wholesale rates to Local Power Companies (LPCs) throughout the region, which are either municipal utilities or rural electric cooperatives.

We have a pretty unique system here in the Tennessee Valley because we operate entirely on public power, whereas most other large electric utilities in the U.S. are privately owned (called IOUs for “investor-owned utilities”). One caveat to this is that federal appropriations for TVA’s power program ended in 1959, and while TVA is considered a nonprofit entity, it sells bonds to finance its operations. 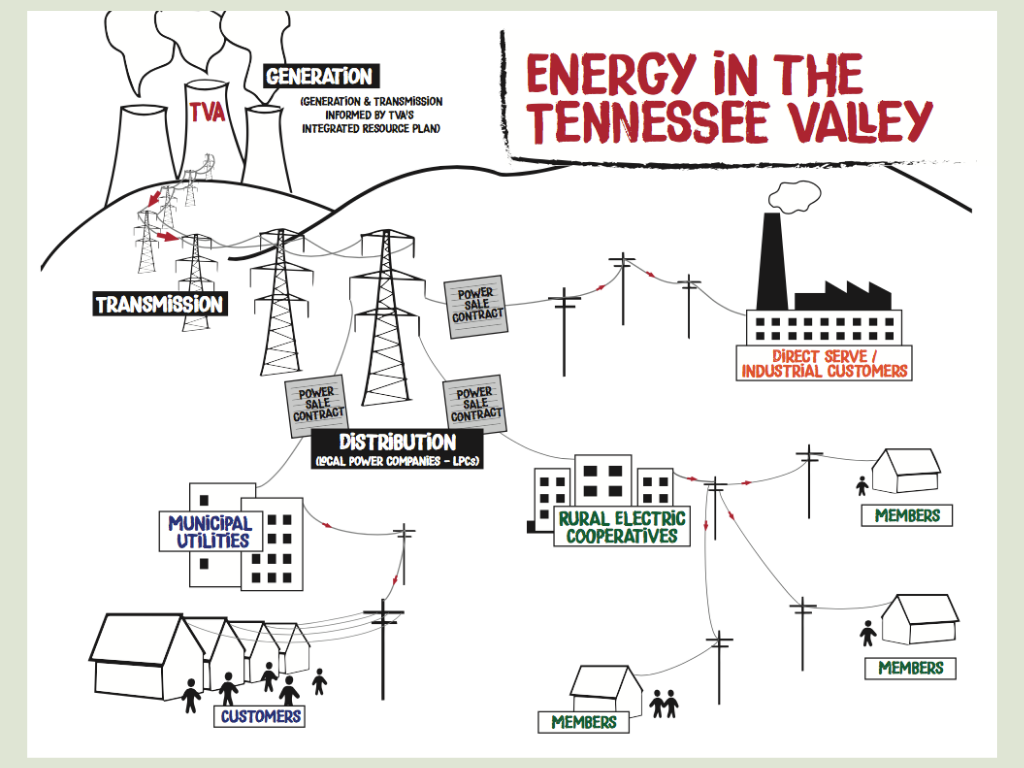 When we hear the term public power, it inspires an idea of a democratic energy system that serves the best interest of communities. Unfortunately, many feel that TVA has not been operating much like public power provider. 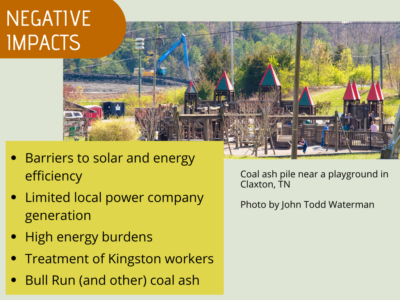 Some of TVA’s negative policies and impacts on communities include:

These are all symptoms of one big problem, which is that communities don’t have democratic control over decisions about their energy production and use. 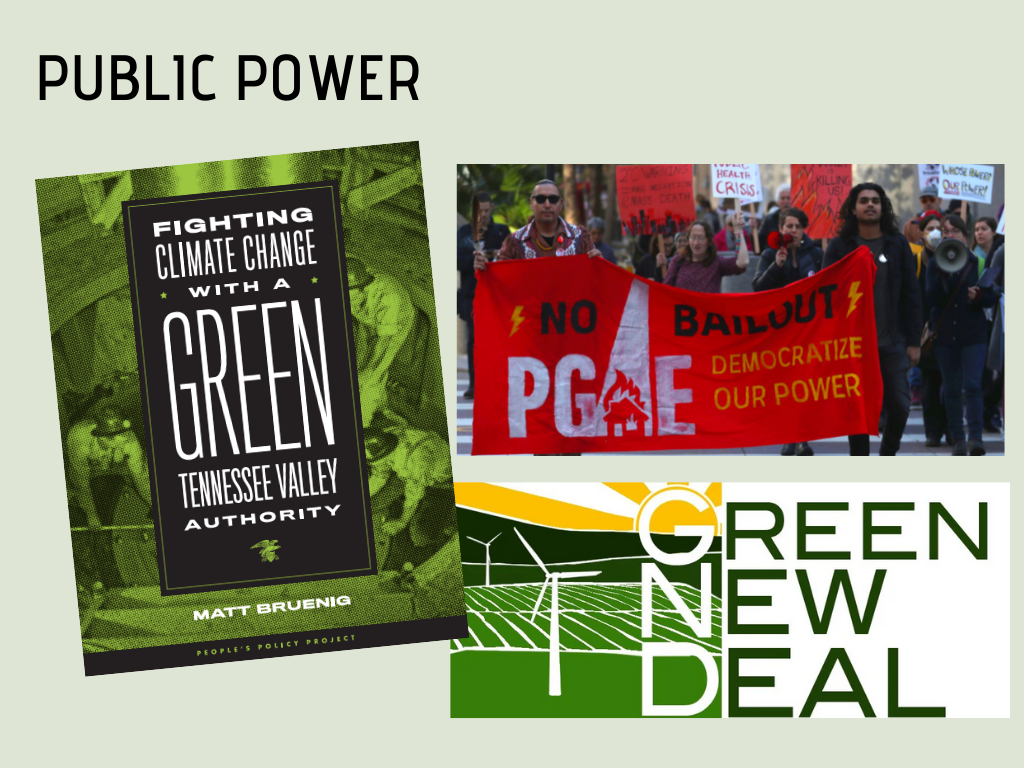 Public power can and should be a vehicle for that democratic control. TVA isn’t beholden to shareholders and its purpose isn’t to make the most profit. So that’s the motivation behind the Energy Democracy Tour — if communities had democratic control, what would our energy system look like?

Another motivation is informed by the national conversation around energy reform and addressing the climate crisis, which centers on public power. We’re hearing political candidates and pundits talk about expanding TVA nationwide, viewing public power as the best vehicle for addressing climate change at the rate and scale we need. We think it’s important to note that public power offers an opportunity to address this problem not only at the pace we need, but also in a way that is socially equitable and just. 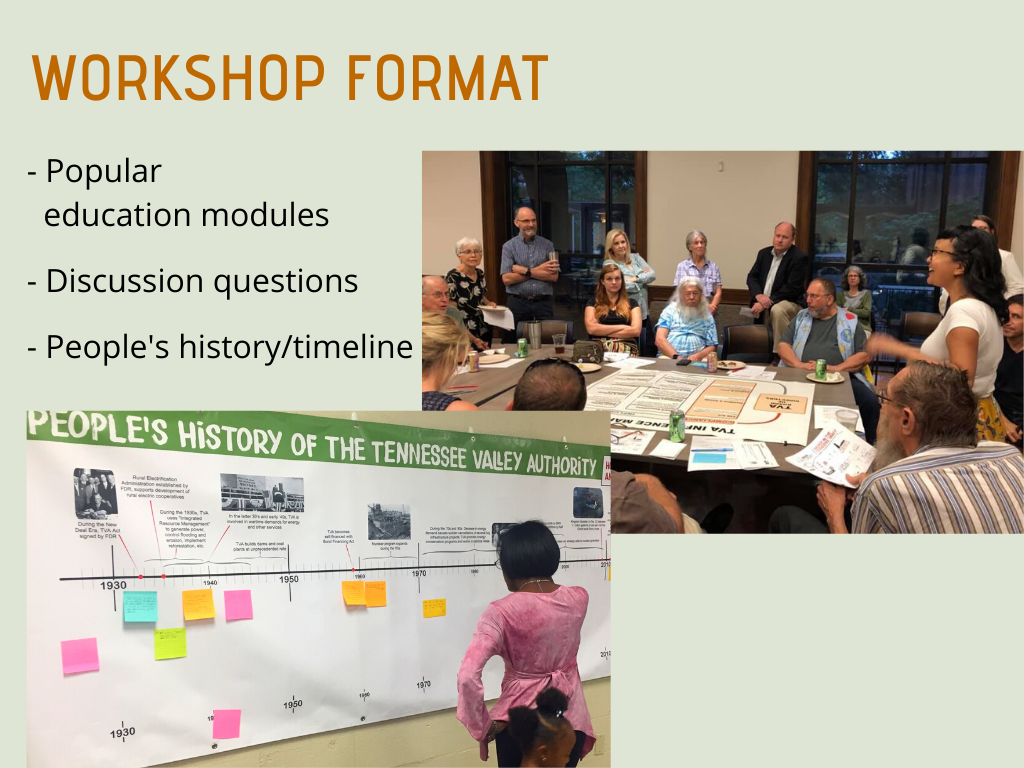 We knew this listening project was going to be challenging because our energy system and the energy issues we face in the Tennessee Valley are pretty complex.

To ground the community feedback conversations, we began the tour workshops with an overview of our energy system, an activity around influence and TVA decision making, and a section on the history and impacts of TVA.

Because this is ultimately a listening project, we used popular education techniques, incorporating activities and prompts aimed at drawing out the knowledge and expertise of the participants in the room in an effort to inspire personal connection with the content.

One of the ways we facilitated this personal connection was by asking participants to add their experiences to a “People’s History of TVA” timeline.

The three main questions that we asked consistently were: 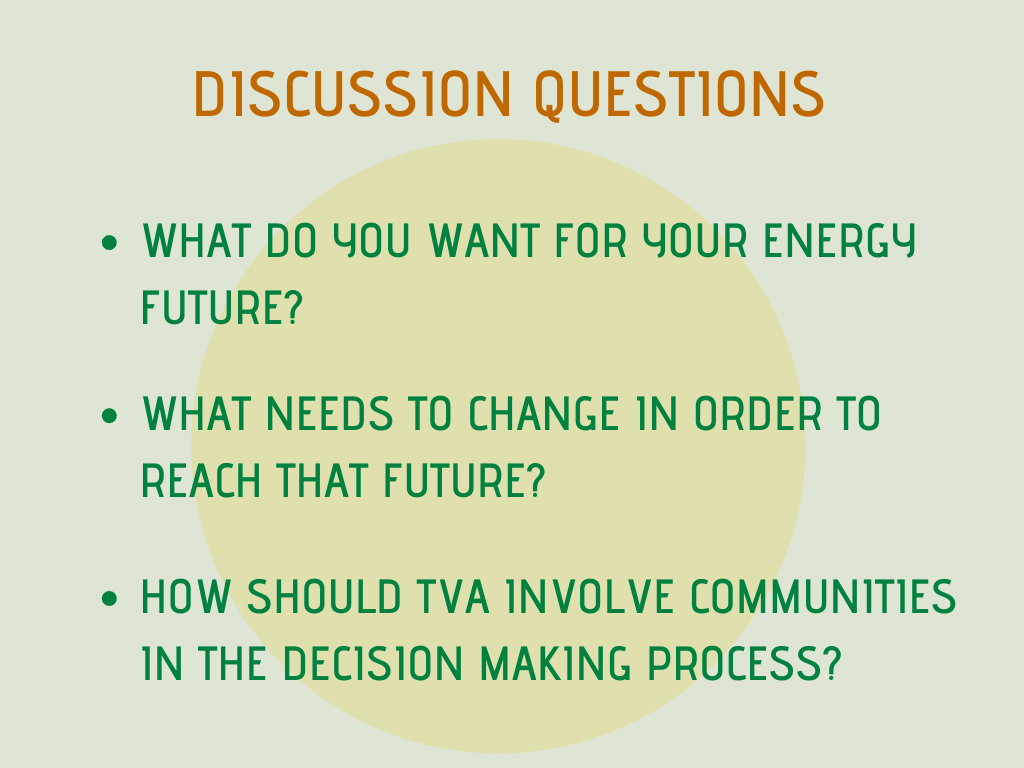 Our goal is to translate this community feedback into action by drafting a white paper with policy suggestions that would create the changes ratepayers in the Tennessee Valley want to see.

Some of the tour stops were larger than others, and some drew a more diverse collection of participants than others. On average, we were reached between 300 and 350 community members with the first phase of the Energy Democracy Tour.

In order to keep community members centered, we asked Knoxville residents and tour stop participants to do the first round of notes processing. 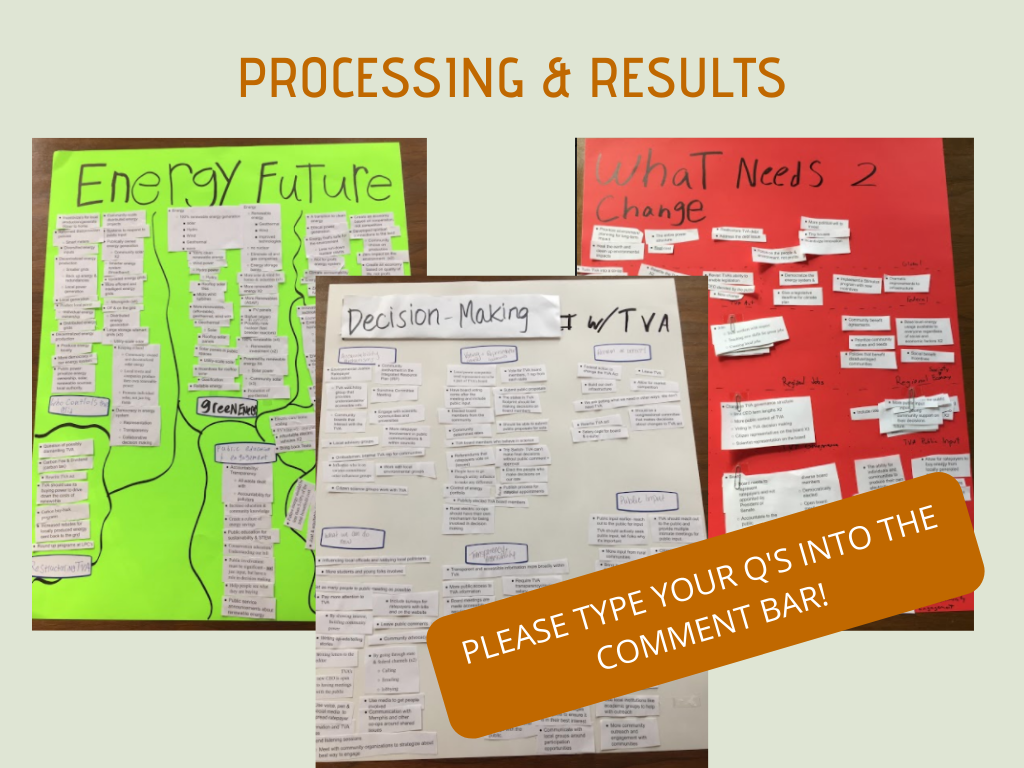 The volunteers received print outs of all of the results for each question and were asked to divide those answers into categories. After this first round, we codified the results even further, which are summarized in the results graphics below.

The community feedback gathered during the Energy Democracy Tour contained a large volume of information and a couple of conflicting ideas about what our energy future should be, so we decided to zoom out and identify the main values that arose from these discussions. 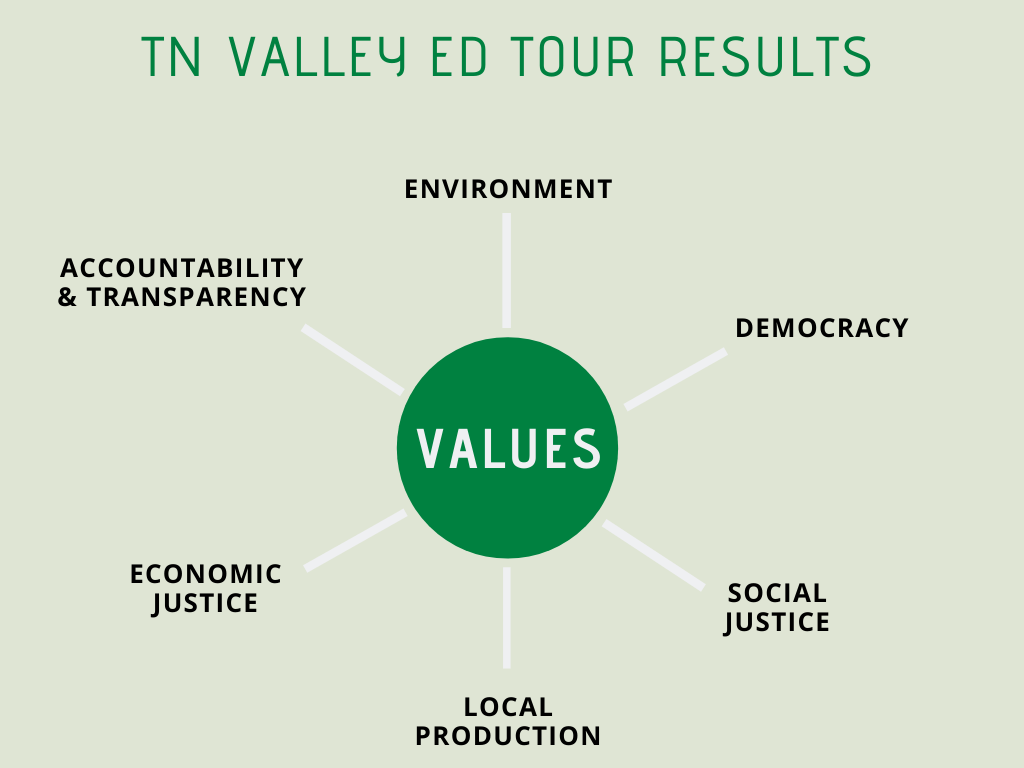 Environment Tour stop participants were strongly driven by the high value they placed on our environment
Democracy Not just feedback, but a real role in the decision-making that is a hallmark of true democracy.
Economic justice There were many conversations around cooperative economy and energy equity as it pertains to consumer bills and access to renewable energy and energy efficiency.
Social justice Participants value people and communities over profit, and want to see their power provider demonstrate commitment to more than the bottom line. Energy as a human right was another aspect of this conversation.
Local production Locally owned generation is highly valued.
Accountability and transparency It is very important to participants that information around our energy system is transparent, and that representatives of our public power are accountable to communities.

What do you want for your energy future?

When we asked participants this question, we asked them to dream big and envision an ideal energy future for their communities. The vision below looks pretty different from the energy system we have now. 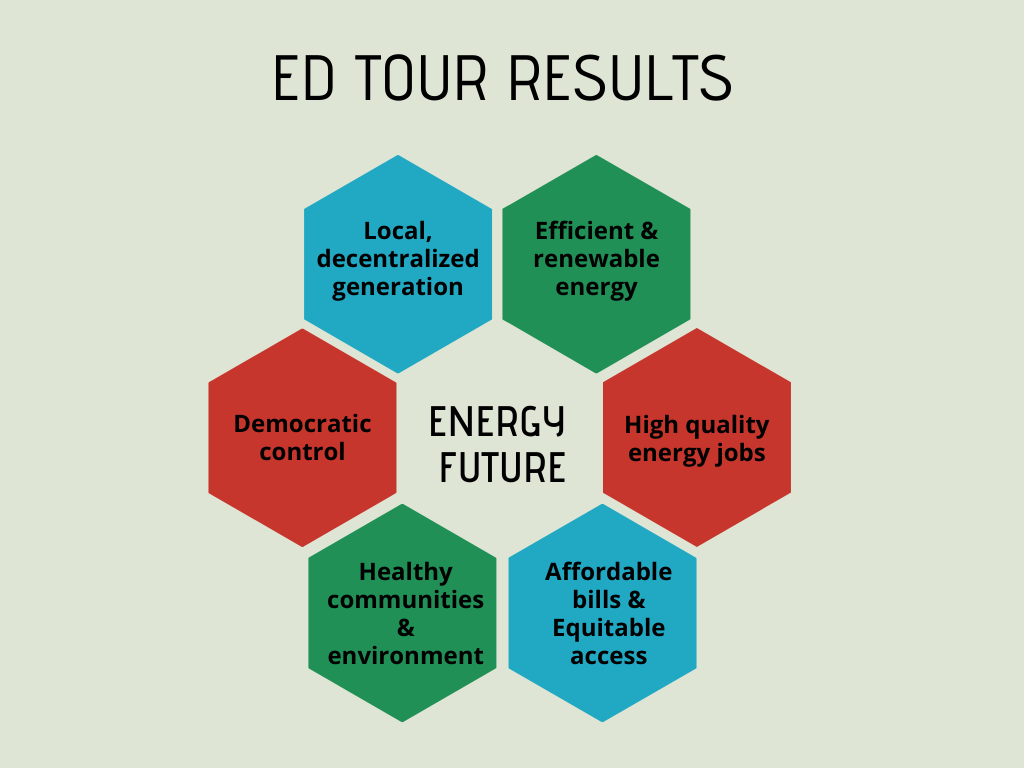 Local, decentralized generation This was a huge priority. Participants want to be able to generate their own energy, community solar and for LPCs to be able to produce more local energy.

Affordable bills/equitable access There was a lot of concern about affordability. We heard several conversations about energy as a human right, no power shut-offs for inability to pay monthly bills, and programs that would make bills more affordable, like residential energy efficiency. Equitable access to energy resources like solar was also a big topic of conversation.

What needs to change to reach that energy future?

We broke down the responses to this question into four main categories:utility business model, technology and infrastructure, governance and relationships. We added one or two additional ideas to the “pathways to change” in order to round out the ideas generated by tour stop participants. 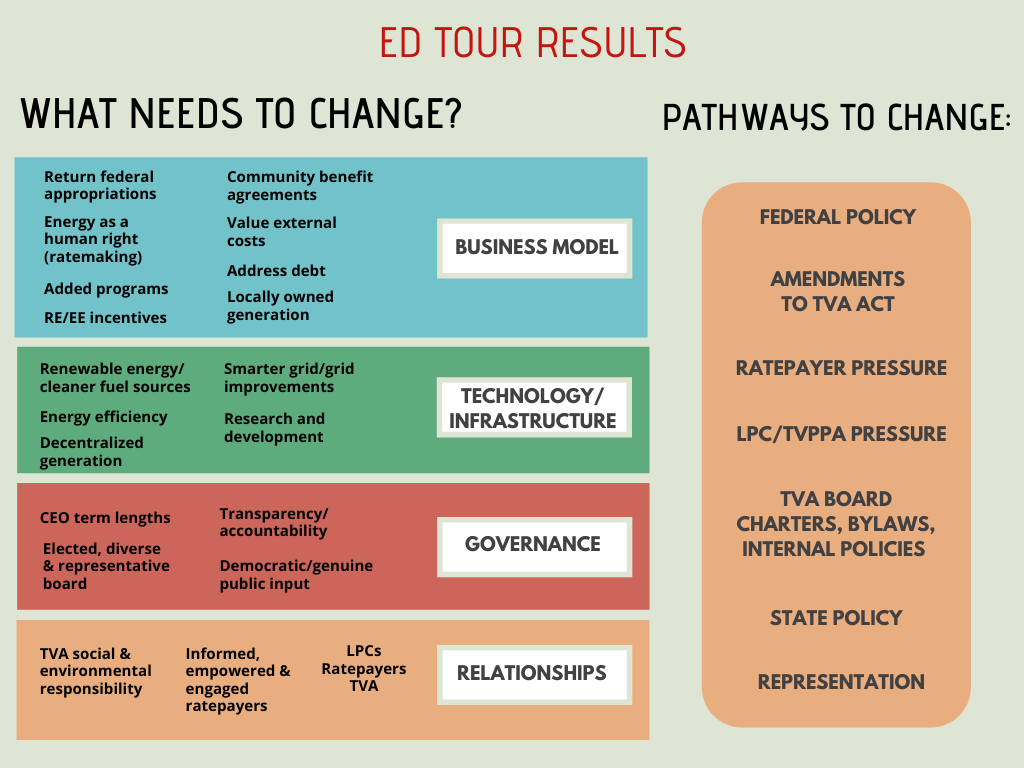 How else should TVA involve communities in the decision making process?

Another way to consider this question might be, what would a democratic governance structure look like at TVA? 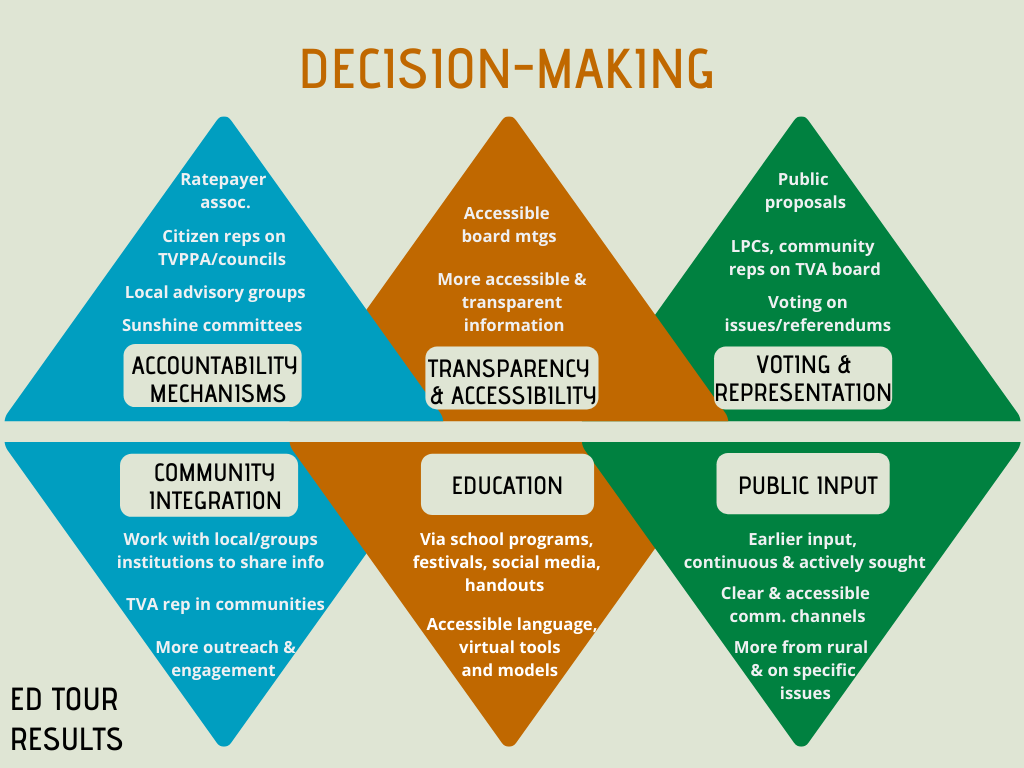 From the results above, communities clearly want a more participatory form of governance at TVA. They want better representation and more input on decisions. They want their power provider to work with community leaders to get information and public input notices out to residents, and they want local TVA representatives in their communities. Education and information must be transparent and accessible, and TVA should be accountable to the community.

Next steps – Get involved 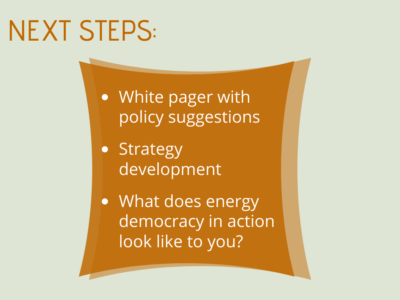 The organizers of the Tennessee Valley Energy Democracy Tour are building a strong coalition of partners to join the work of transforming our energy system from the ground up. That means we need organizations involved, and more importantly, impacted community members and grassroots groups leading the way.

Our first step in translating community feedback into action is to draft a white paper with policy suggestions on how to create the changes communities want to see. This white paper will be released in early 2020. In the meantime, we’ll be recruiting folks to join strategy meetings for building a grassroots movement. If you want to stay informed or get involved, please sign up via the form below ↴ 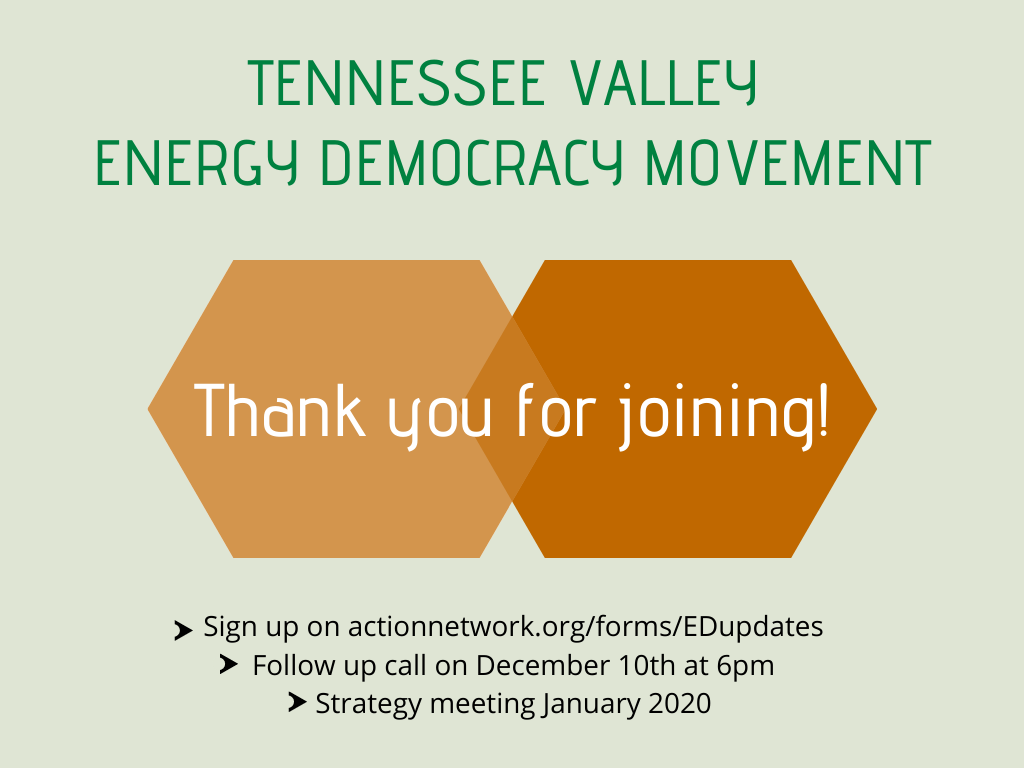