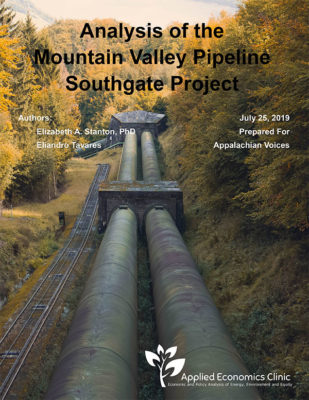 Today the Applied Economics Clinic (AEC), a nonprofit consulting group, published an analysis finding that neither the builder nor the anchor customer of the proposed Mountain Valley Pipeline Southgate extension project have provided “convincing evidence of a need for MVP Southgate.” The report exposes the flimsy assumptions used by MVP, LLC and PSNC Energy to justify the new 73-mile fracked-gas pipeline, and it points out existing, cost-effective alternatives to new pipeline infrastructure.

Appalachian Voices commissioned the report in order to provide decision makers and the general public with an independent analysis of the alleged need for the pipeline, performed by a third party who does not have an economic stake in the pipeline. Specifically, the report finds that:

The controversial Mountain Valley Pipeline is currently under construction and is proposed to transport gas 303 miles from the West Virginia fracking fields into southern Virginia. The proposed MVP Southgate project would extend this pipeline an additional 73 miles into North Carolina where PSNC Energy, recently acquired by Dominion Energy, has contracted for 80% of the pipeline’s capacity.

Public comments on the project are being accepted by the Federal Energy Regulatory Commission (FERC) through September 16.

Appalachian Voices’ North Carolina Program Manager Amy Adams:
“We have seen developers’ arguments of alleged need for new pipelines crumble over the past few years. Considering the massive disruption to the land, waters, and lives of the people living along these interstate pipeline routes, regulators must look at the facts in this report and conclude that not only is another new pipeline not necessary here — it’s also not worth the cost.”

Appalachian Voices is a nonprofit organization working at the nexus of the ongoing shift from fossil fuels to clean, 21st-century energy sources. The organization brings people together to fight mountaintop removal coal mining, fracked-gas pipelines and other harms to the people and places of Appalachia, and advances energy efficiency, solar and wind power, and other economic solutions that create community wealth and sustain Appalachia’s mountains, forests and waters.

The Applied Economics Clinic is a nonprofit consulting group based in Arlington, Mass., that provided expert testimony, analysis, modeling, policy briefs, and reports for public interest groups on the topics of energy, environment, consumer protection and equity, while providing on-the-job training to a new generation of technical experts.