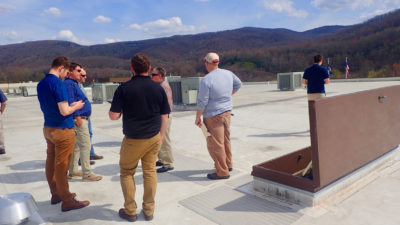 The Solar Workgroup of Southwest Virginia assesses the roof of the Norton Community Hospital for a future solar project.

Davis Coffey is a Communications Intern in our Charlottesville office for Fall 2019.

Last week, the Appalachian Regional Committee (ARC) announced the 54 recipients of the 2019 POWER grants (Partnership for Opportunity and Workforce and Economic Revitalization) for communities in the Appalachian region. Appalachian Voices is delighted to be one of the seven recipients in Virginia, receiving $49,940 for the Taking a Proven Energy Model to Scale project.

This project will refine the commercial-scale solar group purchase program developed and facilitated by the Solar Workgroup of Southwest Virginia. The grant will also be used to examine options for expanding the group purchase approach to a multi-state coalition, conduct a regional market analysis of solar opportunities, and prepare an assessment of the solar project finance ecosystem.

As the coal industry continues to decline, Southwest Virginia’s coal-producing counties are experiencing falling employment levels. According to a study the ARC published in March 2016, annual coal production in Virginia fell from more than 33 million tons to less than 14 million tons between 2000 and 2015. Over the same period, the coal industry lost more than 2,000 jobs in Virginia. In spite of these trends, there is growing momentum around a shared vision within the region to diversify the economy.

In 2015, the ARC developed the POWER program, a congressionally funded initiative that helps communities affected by job losses in coal mining, coal power plant operations and coal-related supply chain industries. The ARC and other economic development agencies are increasingly turning to solar as a viable alternative.

In Southwest Virginia, the economic benefits of a solar energy industry could be significant, especially if it grows to include numerous aspects of the sector — from manufacturing to engineering to installation. Businesses being recruited to the area will seek to power their facilities with clean, renewable resources. Fulfilling part of that demand with locally generated solar power would provide an economic boon and a powerful leverage point for scaling up a diverse regional renewable energy industry sector. 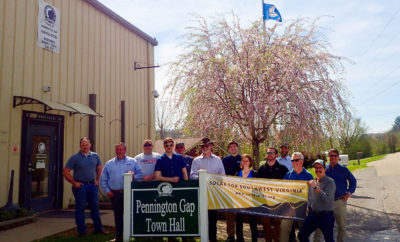 The Solar Workgroup of Southwest Virginia helped the town of Pennington navigate the details of contracting for a solar installation on the town hall roof, starting in 2020.

The Solar Workgroup of Southwest Virginia was established in 2016 to do just that. The workgroup is co-convened by Appalachian Voices, People Inc. and the University of Virginia’s College at Wise. As part of a POWER grant Appalachian Voices was awarded in 2017, the workgroup developed the Solar Roadmap for Southwest Virginia, a technical report that identifies local “ambassador sites” that are ideal for solar installations in the near-term, and which would serve as models for additional solar projects.

Based on a set of key criteria, the workgroup identified six commercial-scale sites ideal for solar installation. In July 2018, the workgroup issued an aggregate Request for Proposals (RFP) to solicit bids from solar companies to install solar at the six sites. The projects represent approximately $3 million in investments.

In April 2019, the workgroup embarked on its second cycle of the group purchase program and released a second RFP representing an estimated $5.5 million in investments through twelve participating sites across four counties and the City of Norton.

Regional demand for the services offered through the group purchase program continues to grow as building owners and community leaders recognize the benefits of on-site solar. The money granted to Appalachian Voices and the Solar Workgroup in the 2019 POWER initiative will fund a third commercial-scale solar group RFP cycle in 2020 of similar scope to the previous two, allowing the Solar Workgroup to further refine its model while also responding to the steady demand for this service.

Building off of these successes, Appalachian Voices aims to use some of the POWER grant money to bring the program to coal-impacted counties in West Virginia, Kentucky and Ohio in 2020. This scale-up will dramatically increase the impacts in terms of jobs created, workers trained and employed and investments made across the Central Appalachian region.

ARC at the regional scale

In total, the Appalachian Regional Committee invested $44.4 million in the region with the 2019 POWER initiative. The 54 selected projects are estimated to create or retain over 5,700 jobs, leverage more than $39 million in private investment, create and retain over 2,940 businesses, and train thousands of workers and students. With last week’s announcement, ARC has now invested over $190 million in 239 projects across coal-impacted communities in Appalachia since 2015.

In Virginia, the seven selected projects received $4.8 million. Governor Northam stated in a press release: “These grants will help us leverage every available resource as we work to strengthen the economy in areas that were once dependent on the coal industry and enhance the quality of life throughout the Appalachian region.” Projects include broadband expansion, workforce development, water systems improvements and recovery health programs focused on re-employment.

The Taking a Proven Energy Model to Scale project proposed by Appalachian Voices and the Southwest Virginia Solar Workgroup is the only one in Virginia attempting to diversify the region’s economy by supporting the growth of a renewable energy cluster. This growth will in turn attract millions in private investment while reducing costs for solar developers and utility costs for local businesses and organizations.

By directly supporting and facilitating the development of a solar industry, the project will create both short-term and long-term jobs, attract established businesses to the area and support new startups, all while creating solar workforce training and certification for local students and workers.

The overall goal is to scale the local impacts to a multi-state level, attaining measurable economic impacts in Central Appalachian coal communities. With the help of the economic benefits presented in the ARC POWER winning projects, the Appalachian region should continue to trend in the right direction.